I must say that the last month or so has been strange for me, in the sense that I’ve spent a good chunk of it with a beautiful girl I met in Paris, my dad in Madrid, and finally my best friend Deena, who you’ve already been introduced to. After months of constantly meeting new people and spending the majority of my days wandering about on my own, it’s been an adjustment having people by my side. Deena is back in Boston now, coping with the snow and a fever (which she probably caught from me), which means the solo backpacker life beckons once again. Huzzah!

We’re both big-time nerds, so museum visits were at the top of the itinerary when Deena arrived amidst much fanfare (she’s a one-woman pep squad) at the airport about a week ago. The first thing we did after dropping our things off in our apartment was visit the Museo Lázaro Galdiano, which has a variety of world-class art ranging from Roman coins, Medieval ivories, contemporary video art, and photography.

Just as captivating as the art collection was the building itself: a la Huntington Library in California, the Museo Lázaro Galdiano was a private residence, resplendent with ceiling frescoes, a plush velvet elevator, and an elegant two-level central salon. I feel it’s almost too obvious to mention, but we also visited both the Museo del Prado and La Reina Sofia, but you’ve probably already heard of them and don’t need me to tell you they’re worth visiting.

When it comes to food, Deena and I made sure to drop by Mercado San Miguel, a boutique market that caters mostly to tourists but is worth the exorbitant price when visiting the city.

Deena is allergic to seafood and peanuts, the latter not such a big deal but the former making it slightly more difficult to choose from the extensive lineup of booths purveying all sorts of tapas.

Allergy or not, I was undaunted in my quest to find us delicious food to munch on, and although I would question the Spanish-ness of calzone or fresh mozzarella di bufala, we ate with a gusto which any Spaniard could respect. 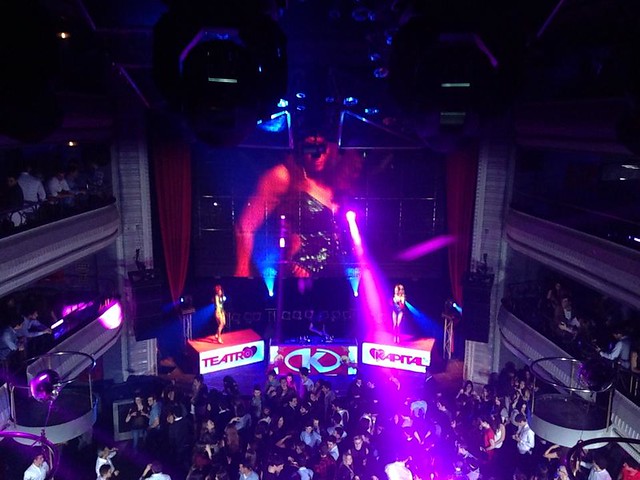 Speaking of gusto, we partied until morning at the much-vaunted Teatro Kapital, a seven-story club which attracts a crowd of young professionals, students both foreign and local, and grubby backpackers like me. Like Mercado San Miguel, Teatro Kapital ain’t cheap, but even for those who aren’t so much into the clubbing scene it’s worth a go simply to say you’ve been there. We arrived at around 1 AM and although the club didn’t really start pumping til 3 AM, the next three hours were an intoxicating blur of strobe lights, techno music, and the eye-watering scent of cologne mixed with sweat and vodka-Red Bull cocktails. 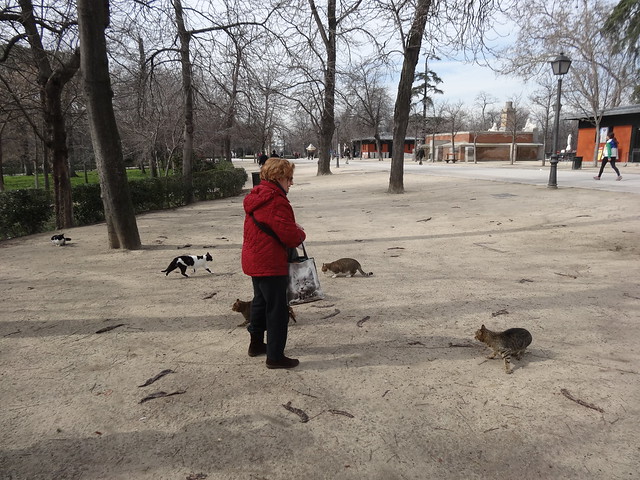 Teatro Kapital marked the halfway point of our stay in Madrid, and the next few days were considerably more easy-going. Nothing is more relaxing than a long stroll through the park, so we went to Parque del Retiro to unwind from the headiness of the club. It was there that we met an older woman surrounded by stray cats who call the park home; she told us that she is part of an organization that feeds the numerous felines which roam the park, a number which she put at around 400.

Be it Central Park in New York or Hyde Park in London, no great urban green space is complete without a musician or two. This guy played a pretty mean sax.

On our final night in the city, we decided to go out with a bang and took in a Flamenco performance at Tablao la Quimera. We opted to have a sit-down dinner while we watched, and the food was as plentiful as it was good. As for the performance, I have read that it isn’t real Flamenco unless you’re seeing it somewhere in Andalucia, and preferably not paying anything for it. While the crowd was a bit chatty at first, things soon fell silent as the dancers became more and more absorbed in the carefully controlled rhythms of the dance. Flamenco is a cauldron of fury, love, sadness and lament; what we witnessed was a high simmer verging on a rolling boil, and it was the perfect way to conclude our rendezvous in Madrid.