It took a lot of effort to extricate ourselves from the pull of San Sebastian, but eventually Salo and I left the Basque province of Gipuzkoa (we needed a full five days to pronounce it correctly) and headed west to the largest city in Basque Country, Bilbao. 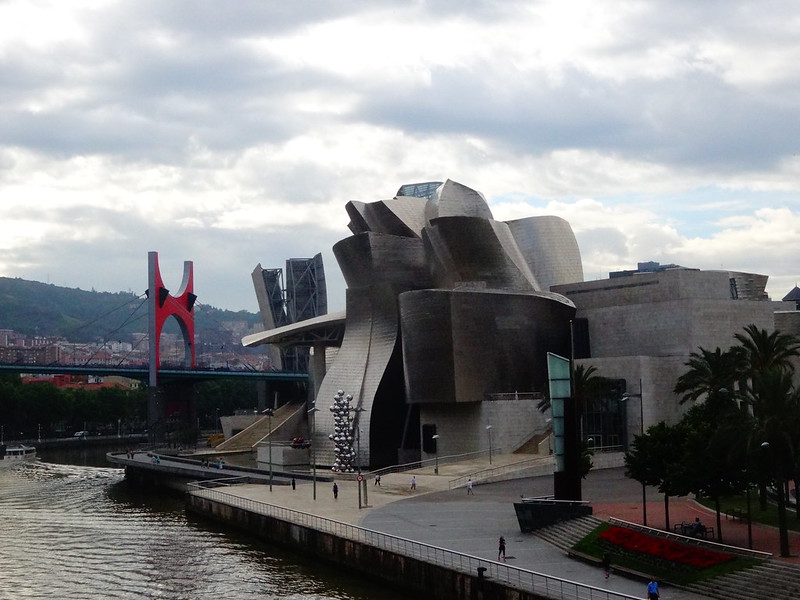 As we would soon come to learn from our incredible Couchsurfing host Iñaki, Bilbao is a city that has remade itself in just 15 years. This coincides with the launch of the world-famous Guggenheim Museum, which ushered in a complete makeover for the city and its inhabitants. 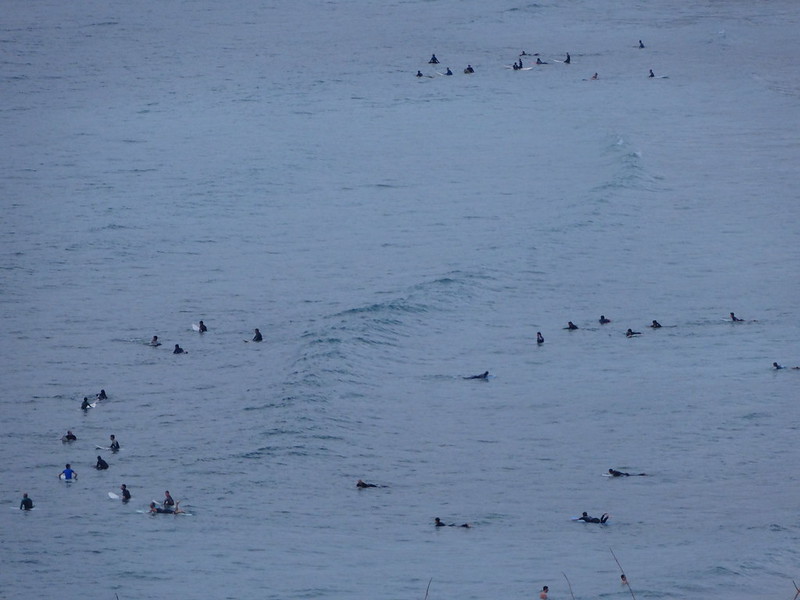 Out went the heavy industrial factories clustered in the center; in came acres of parkland, green space, and revitalized beaches (many of them nude, in fact). 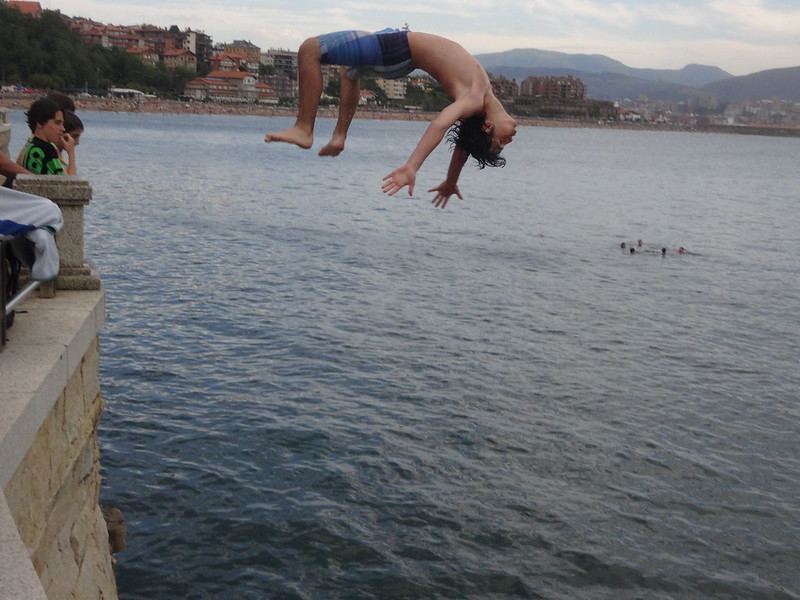 Out went the dreary gray buildings of old; in came new sleek ones by some of the world’s foremost architects, such as Jose Calatrava and César Pelli. Echoing the transformation of the city is the conversion of the old harbor of suburban Getxo–once a fishing village–into a swimming hole for the city’s youth. 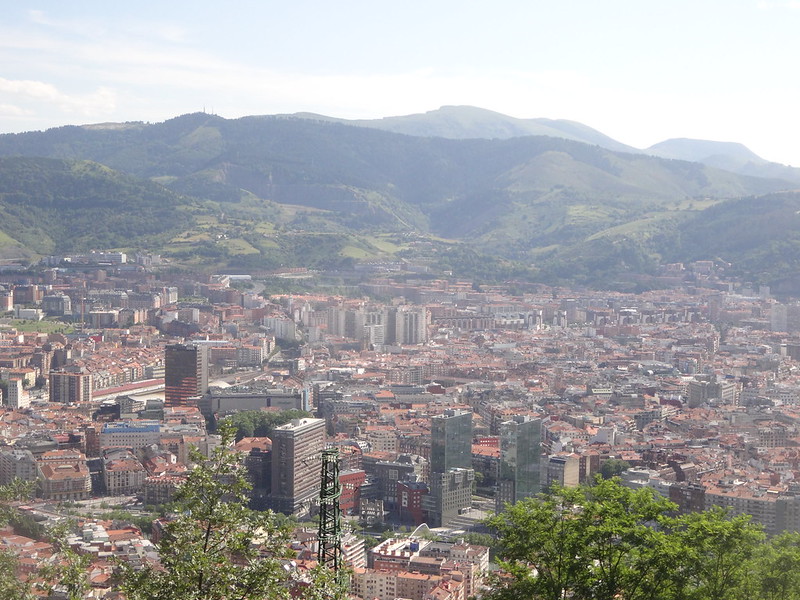 Once a place devoid of tourists, Bilbao is now a major destination for enthusiasts of avant-garde art, cuisine, surf, and music (there’s a huge festival starting in just three days, in fact). 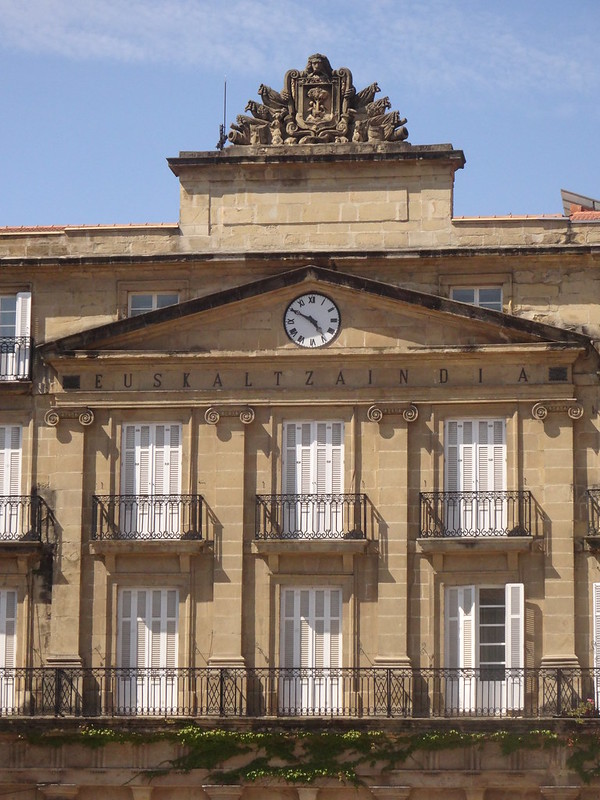 Salo and I made the most of our rather limited time in the city: on the first day, Iñaki took us around and pointed out some of the basic landmarks and gave us a brief history behind Bilbao. This is how we learned about the Academy of Basque Language, which keeps it from becoming bastardized in the same way that Iceland and Norway have similar institutions to preserve their mother tongues. 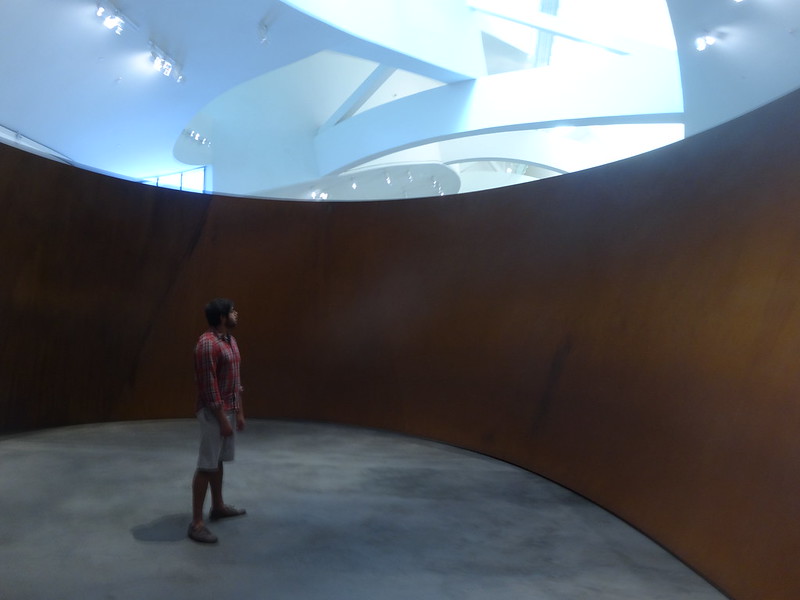 On our second–and last–day in the city, Iñaki dropped us off in the city center so we could explore the Guggenheim. I’m not a huge contemporary art snob–if you’ve been here before then you realize my tastes run Medieval–and Salo is rightly cynical about this sort of art, but surprisingly, we really enjoyed ourselves. 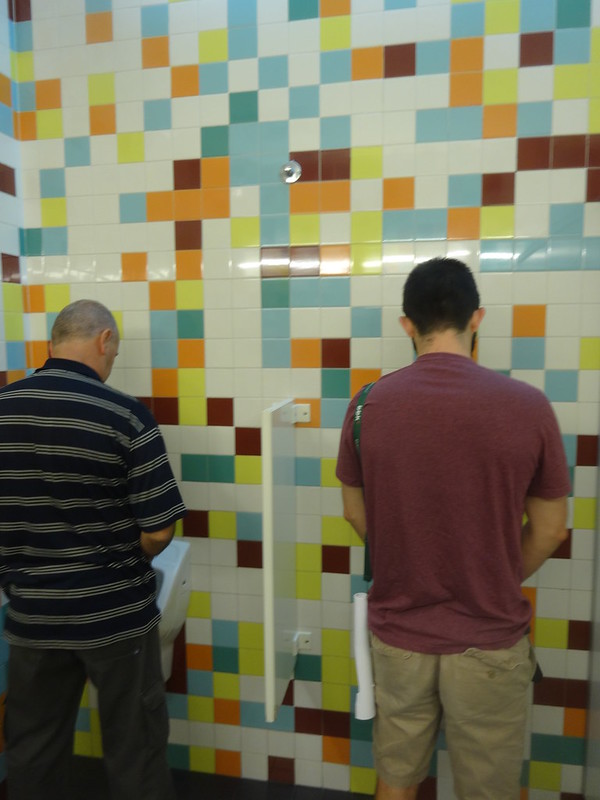 After wandering through Richard Serra’s canyon of weathered steel sculptures, we were in a pensive mood: what did this colored tile pattern in front of the urinals say about masculinity’s relationship in the 21st century to the quotidian? Was there still dignity to be had for the working class man? 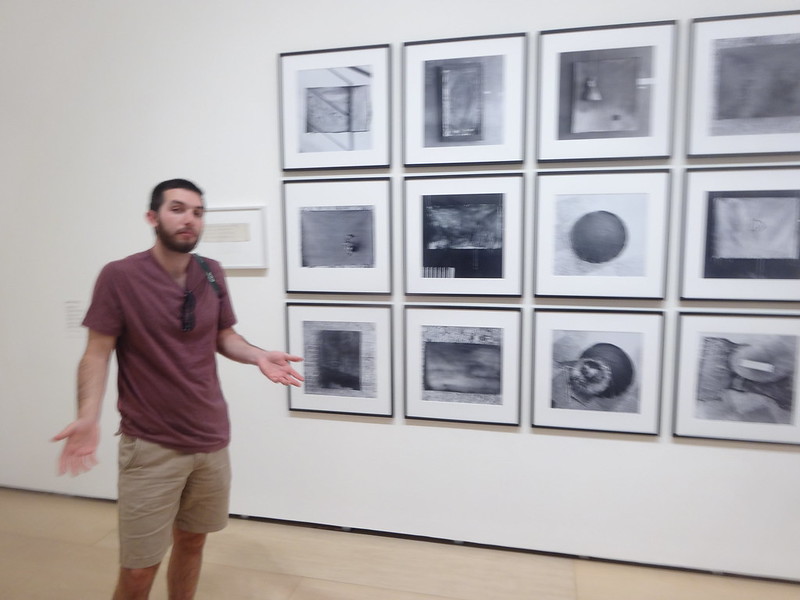 And what about Yoko Ono’s arrangement of everyday objects? What sort of critique, manifest in her display of random everyday objects, was she making towards the patriarchy? 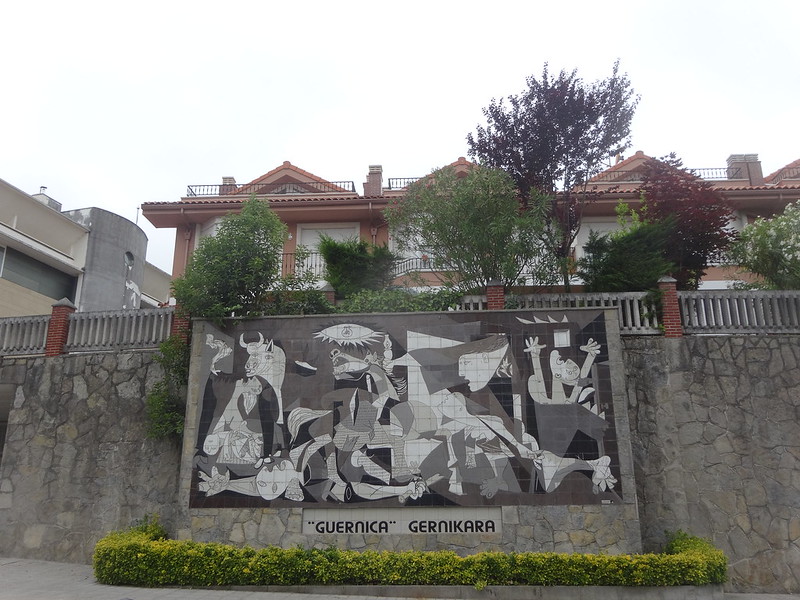 Unfortunately, the answers to these questions eluded us; perhaps we are not esoteric enough for the Guggenheim and its art. Luckily, Iñaki picked us up just after lunch and whisked us across the mountains to a place that is laden down with the weight of history: Gernika. 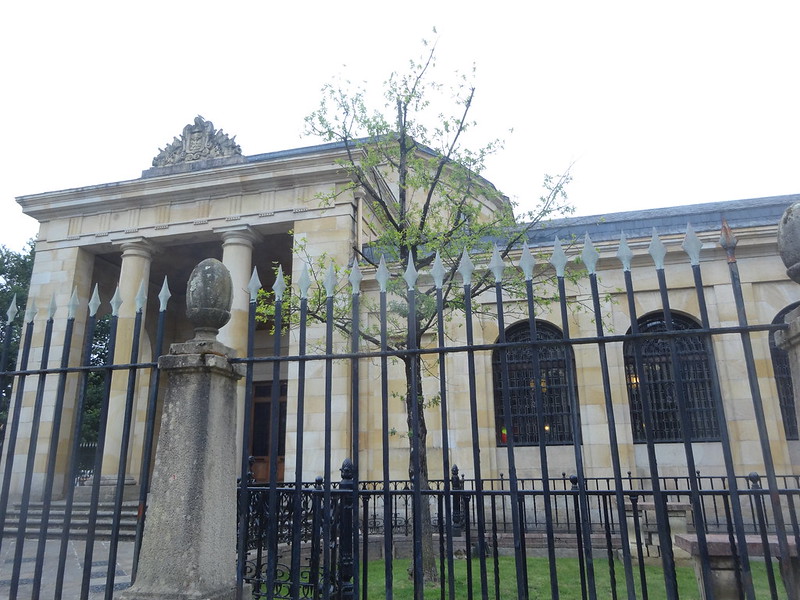 Our host explained to us that one of the reasons this humble Basque town was chosen by Franco to be obliterated was its symbolic place in Basque lore. Since the beginnings of the Basque nation, the leaders of each town met once per year under a stately oak tree in the city of Gernika to settle disputes, dictate new laws, and catch up with one another–very similar to the Icelandic Althingi in its functionality. Franco chose Gernika because it symbolized Basque sovereignty more than any other place in the nation, and so it was fitting that after the bombs fell and the dust cleared, the old oak tree still stood–defiant as the people who gathered beneath it for millennia. That tree has since died, and a new one stands in its place, mirroring the rebirth of Basque culture in the wake of Spain’s return to democracy. 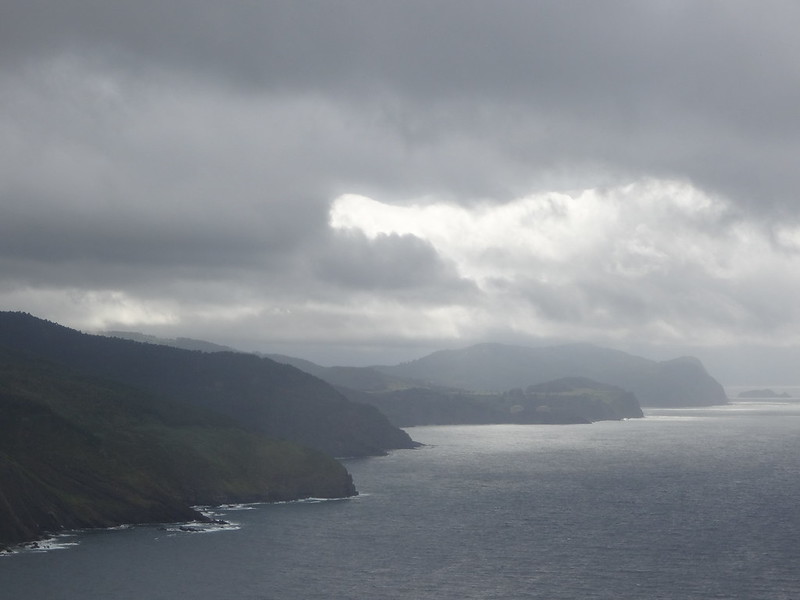 From Gernika we drove northwest, crossing the last range of mountains before reaching the coast. The mist had gathered along the mountains which rumble into the Cantabrian Sea, and the wind was blowing droplets into my camera as I stepped outside the car for a brief shot. 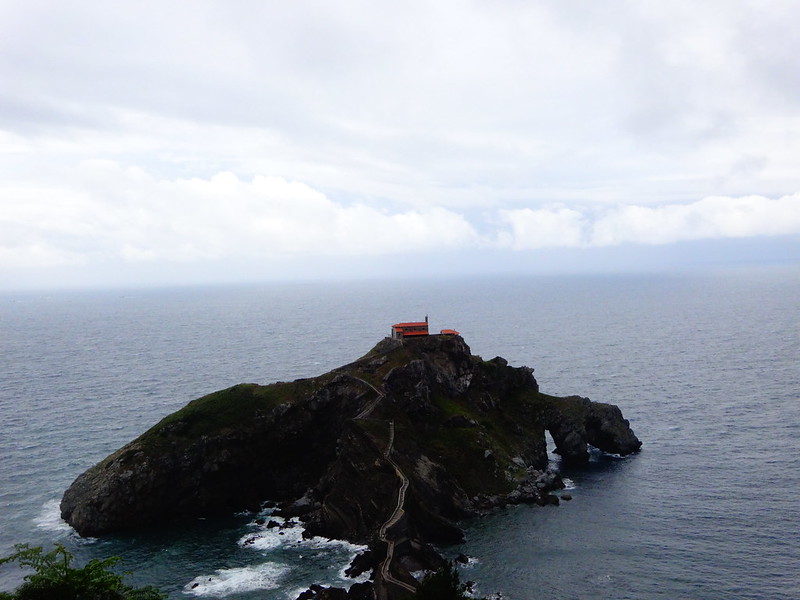 Our final stop was the breathtaking old hermitage of St. Juan de Gaztelugatze–a small church on a rocky island just offshore, connected by a series of winding stone stairways. 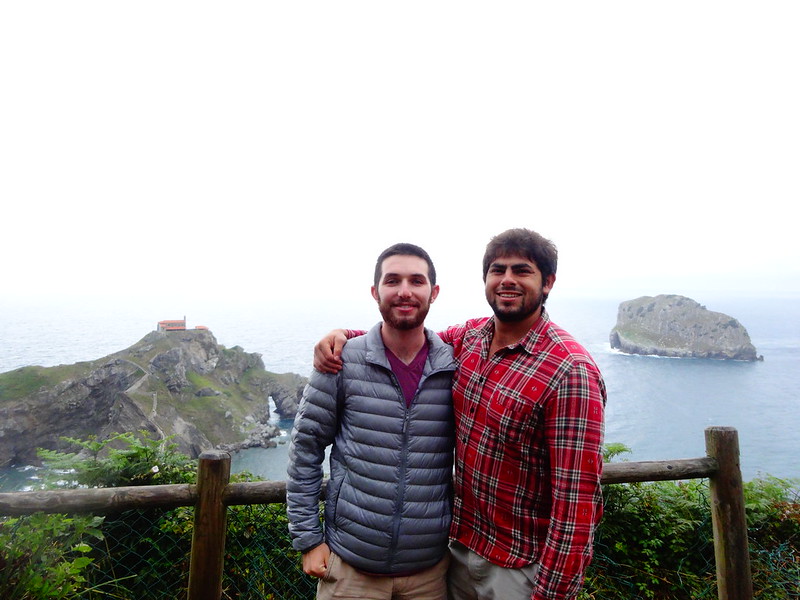 After spending two weeks together, this was my last day with my cousin Salo, who is currently enjoying the sunny south of Spain with a friend of his from college. Salo will be going to Israel soon and then return to California to begin the next chapter of his life as a newly minted graduate. He may or may not be headed to South America on his own solo backpacking trip, and I am sure whatever he chooses to do will help him grow tremendously. It has been a pleasure to travel with him and see his view of the world–though we have our philosophical differences, I can’t help but respect the broadness of his mind and his eagerness to learn.

If you’re interested in visiting Gernika but don’t have the time or the car (there is a train, but it’s a schlep) you can always check out the original one in Madrid, which sits in the Reina Sofia Museum. Basque Country has some of the most picturesque coastline I’ve ever seen, and it reminded me a lot of the West Coast of Ireland, especially the gigantic Cliffs of Moher. I hope you’ve found this post interesting and entertaining, especially the part about contemporary art. You might want to check out the crazy stuff they have in museums in Barcelona. And if this is your first time visiting the blog, I do hope you stop by again some time! Don’t forget that you can subscribe for free!