Before I left Petra and headed north to Karak, I sent my dad a sobering email: “If you don’t hear from me by Thursday, contact the State Department.” 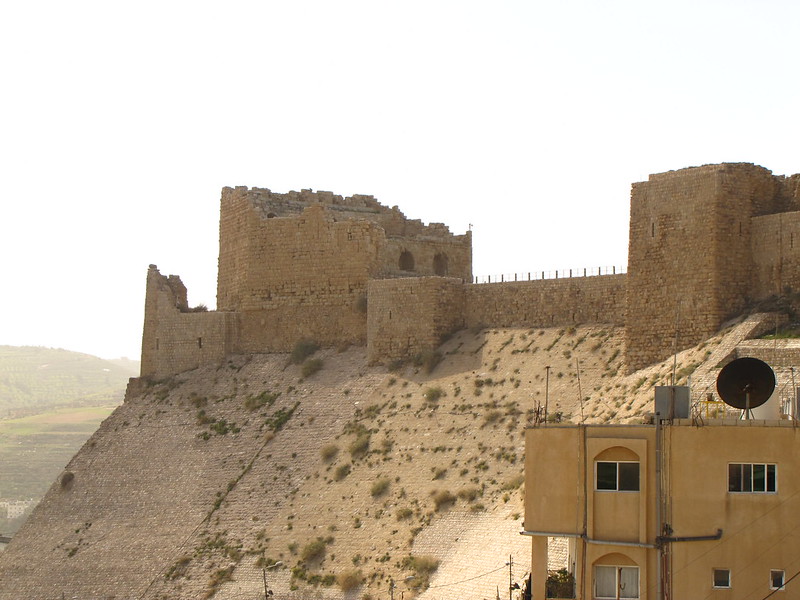 Before I celebrated Purim in Tel Aviv I took a 10 day detour to visit Jordan. My first stop was Petra (you can see my pictures here), but a gazillion bloggers have already said everything there is to say about Petra. My two cents: it’s a cool place, but the admission charge is highway robbery.

What you really want to hear about is how the hell I ended up in a tiny village in the middle of Jordan, and why I felt it was necessary to add gray hairs to my dad’s already-graying head.

I planned to visit the province of Karak, roughly halfway between Petra and Amman, in order to see Toby, a friend of my bff Deena (if you have a long memory, she visited me last year in Madrid). Toby was three months into a 2-year volunteer term with the American Peace Corps in Jordan, and we had been talking for a month or so before I showed up in Jordan.

Of course, I couldn’t actually stay with her, because the village she lived in near Karak was extremely conservative. And by that, I mean single men and women can’t be alone together unless they’re father-daughter, or brother-sister. Cousins are possible marriage partners–of course, marriages here are arranged–so cousins of the opposite sex can’t even hang out by themselves. Toby arranged for me to stay with Brandon, a Peace Corp volunteer from New Jersey staying in a village near her, and it was agreed that we would all rendezvous on a Peace Corps trip to Amman the next day.

Adding to the intrigue was the Israeli exit stamp in my passport, plus the glaring fact that I am Jewish. Many Jordanians are descended from Palestinian refugees.

Before I left Petra, Toby set down some pretty clear ground rules: No mentioning where I had just come from. If anyone asked what religion I was, I was a Christian. I was not to talk about alcohol, sex, or anything else that could potentially lead to awkward questions for Brandon or Toby to answer.

My arrival in Jordan coincided with an upswing in tension, largely due to the barbaric execution of a Jordanian Air Force pilot by ISIS just a few weeks before. The government had executed two ISIS prisoners in retaliation, and the US State Department had issued warnings to Peace Corps members to avoid Western shopping malls, especially in Amman, as they were considered targets for ISIS.

Needless to say, there’s a difference between my happy-go-lucky hitch-hiking in Europe and boarding a rickety bus in Jordan heading through potentially dangerous territory. So I sent that email to my dad, got on a bus towards Karak, and hoped for the best. 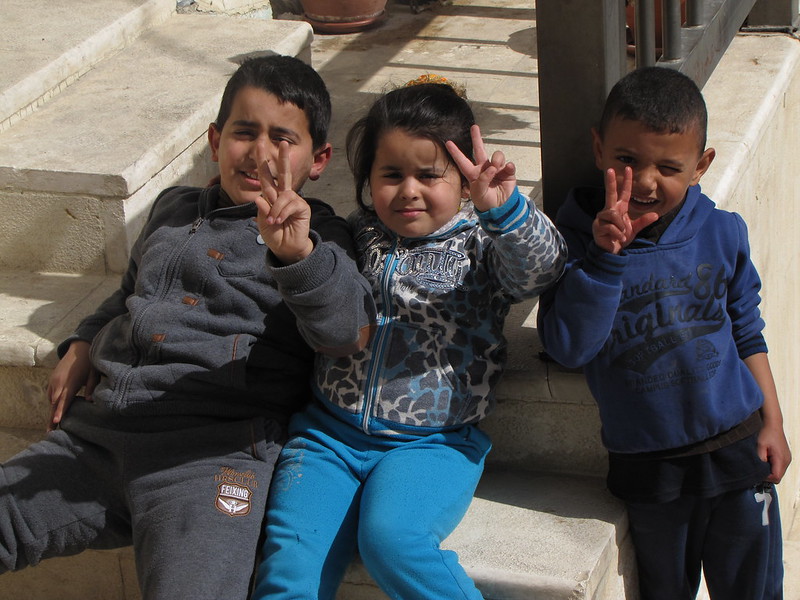 As is often the case with travel, the moment you meet friendly locals, your worries vanish. I had to switch buses once, but a guy on the same bus from Petra went with me and made sure I took the right bus. Once in Karak, I was swarmed by friendly smiling kids. 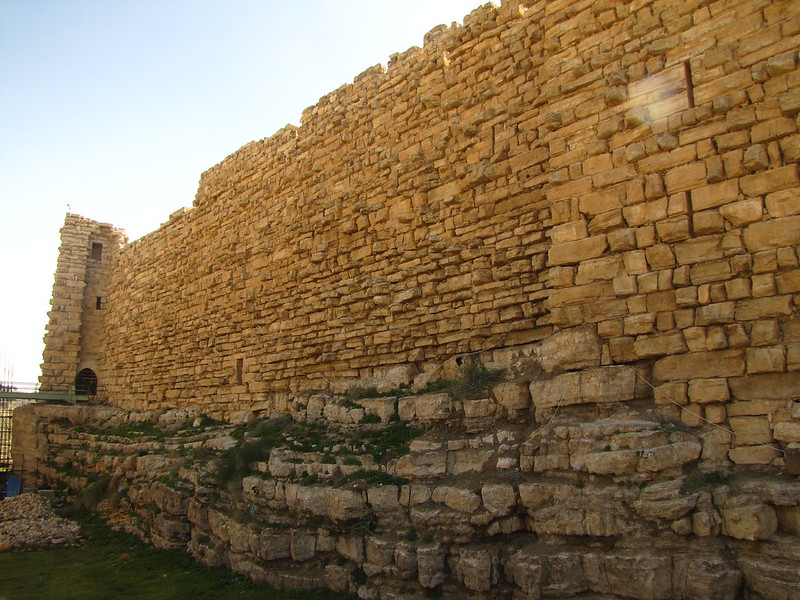 I was running a few hours early, so I set off for the only tourist attraction Karak has. Lucky for me, it was right up my alley: The Crusaders built an imposing castle here in the 12th century. I felt like I was back in Serbia. 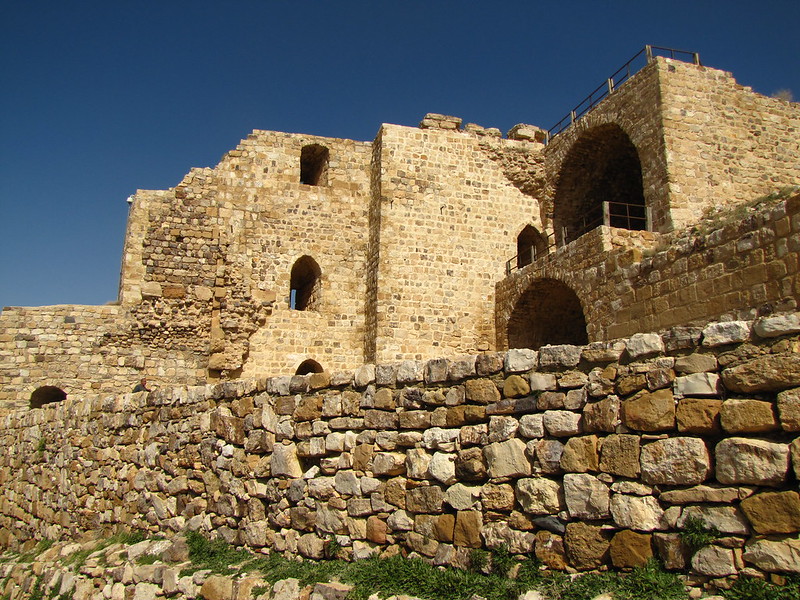 Admission cost only 1 Dinar ($1.40) and apart from a few German tourists I had the place to myself. 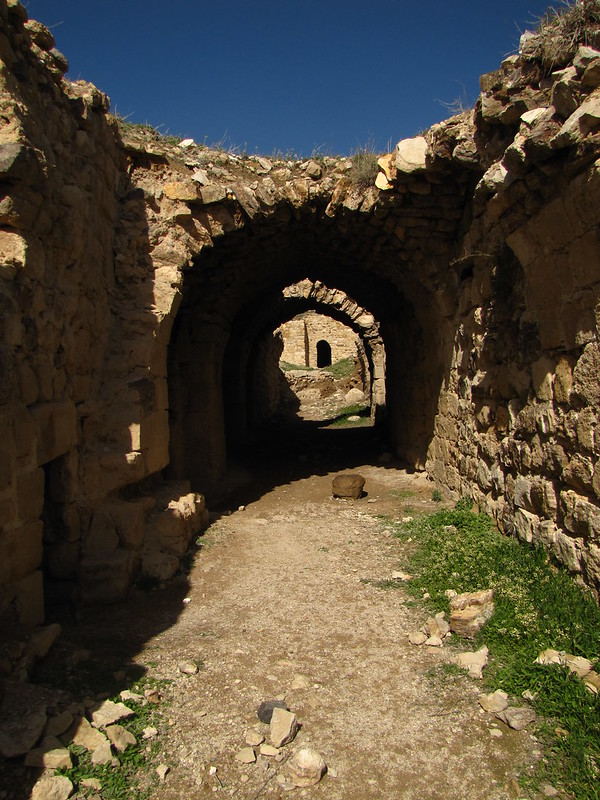 Karak was strategically located along trade routes between Cairo, Alexandria, and Damascus, as well as a resting point for Muslim pilgrims making the haj to Mecca in Saudi Arabia. 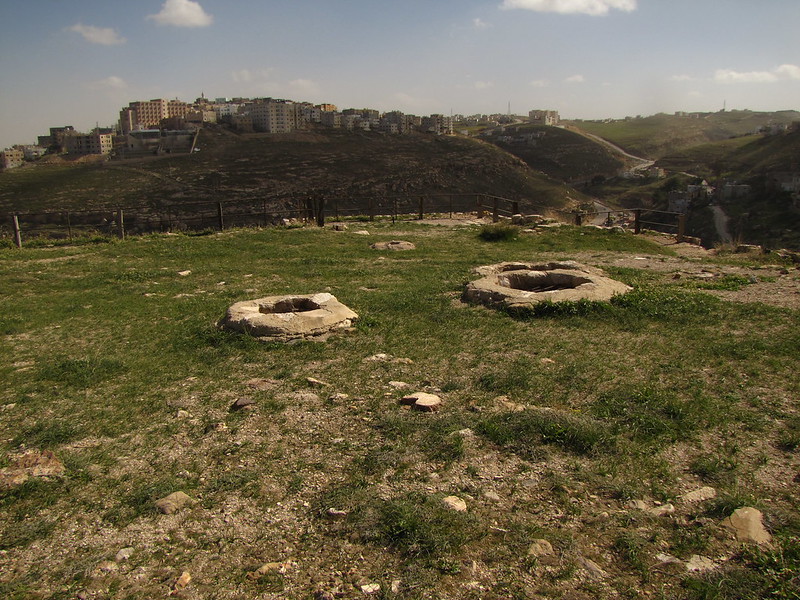 After 150 years of control under the Crusaders, the legendary Saladin lay siege to Karak and eventually took control of it on his way to conquering Jerusalem in 1187.

My tour of Karak castle complete, I wandered down to the main bus area and began asking for a bus to a place called Khaldiya, where Brandon would be waiting for me. I found a guy in his early 20s who spoke a few words in English and he motioned for me to follow him onto a bus.

The bus was already quite crowded, but I was given the front seat, right between the driver and Mohammed, who apparently lived in Khaldiya as well.

In broken English he asked me if I was going to see Brandon. For a moment I was surprised he knew who that was; then I realized that until I arrived here Brandon was the only American in town.

Our driver looked like a Mexican guy named Carlos who used to work at a taco shop I frequented in Boston. He set us on a course to Khaldiya with a protracted blast of the horn, scaring a bunch of schoolkids out of the way.

For twenty minutes we passed through the rolling hills of Karak, occasionally passing through bustling villages. Mohammed asked me what my religion was. “Christian,” I said–the first and hopefully last time I ever have to pretend to be something I’m not. What did I think of D’aesh (the Arabic acronym for the group of fundamentalist shitheads otherwise known as ISIS in English)? Without hesitating, I put my thumb down. “Anta D’aesh?” (are you [with] ISIS?) Mohammed asked me, winking. “La, la!” I denied. Carlos the driver laughed. Toby later explained to me that the vast majority of Jordanians are just as against ISIS as we are.

Mohammed decided to run a quick poll of notable personalities in the Middle East. King Hussein of Jordan? Thumbs up. Saddam Hussein? Thumbs down (Brandon told me after the fact that Saddam was quite popular here, but my fellow bus riders didn’t seem to mind). Benjamin Netanyahu? Thumbs down. George Bush? Double thumbs down (I got a round of applause for that one).

Finally we arrived in Khaldiya. There were mostly fields around us, along with a smattering of large, sprawling houses.

I was expecting mud huts and livestock; instead there were olive groves, a light dusting of snow from the week before, and well-constructed manor homes.

Mohammed got out of the bus with me, introduced me to a man with a car, and we drove across town. We stopped in front of a concrete building with a barber shop in front. Brandon, the only white guy for miles around, was standing there to greet me.

We went inside the shop, which had a few barber chairs and several large couches to sit on. The barber was a Syrian who had left the country just as things went to shit. A few of his homies were lounging around as well. I use the term “homies” without any sense of irony. The truth is, once I arrived in Khaldiya it became clear that the backwards, fundamentalist stereotype we have of people in places like this and throughout the Middle East is simplistic and flawed. 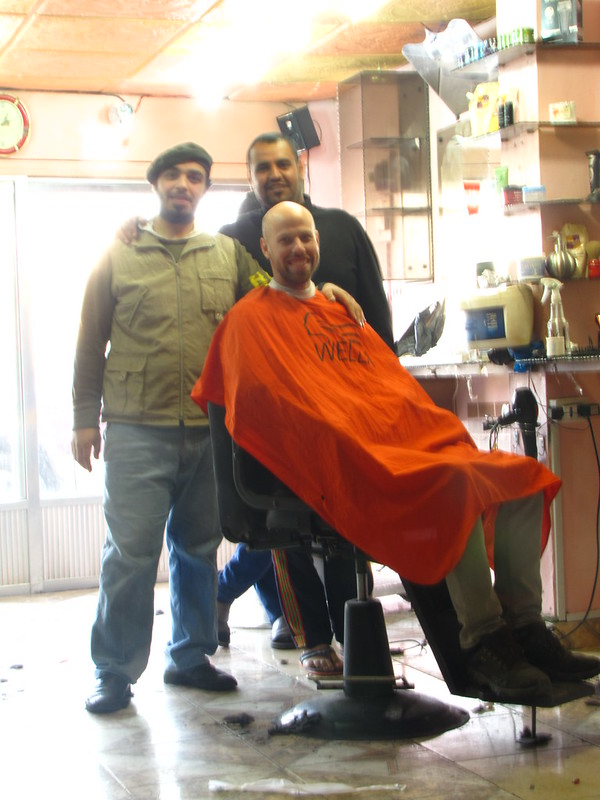 Is the use of the Burkha completely backwards and sexist? Yes. Is it troubling that I had to hide my Jewish identity to avoid any sort of uncomfortable situation? Yes.

But if you put cowboy boots on the barber, shaved off his beard, called him John instead of Ahmed and taught him English, he wouldn’t be out of place in Texas.

Indeed, I got to know the barber quite well, because he was one of Brandon’s first friends in the village. After cutting Brandon’s hair he motioned for me to sit in the chair, then proceeded to give me a trim on the house. Then we all lounged in the shop for a few more hours, shooting the shit, and watched a Jessie Eisenberg movie with Arabic subtitles.

By nightfall we were hungry. Brandon said that Ahmed had invited us to his house for dinner, and we gladly followed him home. When we arrived, we took off our shoes in the foyer and made a beeline for his living room. An LED TV stood on top of an aquarium carrying piranhas. Yes–piranhas. It wasn’t made clear to me, but either Jordan has very lax laws on importing exotic species, or none at all.

Ahmed told us the food was coming, but while his wife–who, surprise, surprise, we never saw–was preparing it, he challenged us to a game of PES, a poor man’s version of the popular FIFA video game. Brandon and I were slaughtered. Just like in America or Europe, I got the sense that this was more than just a game; my honor was at stake.

His young daughter knocked on the door, and Ahmed said something in Arabic. The door opened, and the girl brought out a massive tray of chicken, rice, and peanuts, along with a bowl of yogurt. This was dinner. As soon as the food was on the table she left the room.

Ahmed ushered for us to eat, and we stuffed our faces. Eventually I was full. “Hamdulilah,” I murmured–Praise God.

A full belly is truly reason to praise the heavens, and although the food was mostly bland, it was satisfying.

There was still the matter of reclaiming my honor in Ahmed’s eyes, though. After getting thrashed at video game soccer I needed to redeem myself. I spotted Call of Duty sitting next to the PS3 and suggested we play that instead. I hadn’t played CoD in 2 years but back in the day I was an ace with a sniper rifle.

After one or two shitty rounds where I embarassed myself even more, my skills came back. We were playing a co-op survival mode, where wave after wave of enemy soldiers tried to kill us, and by the end I was kicking ass and bailing Ahmed out, joking with Ahmed that he was holding me back. He was genuinely impressed.

Alas, we had an early departure to Amman the next morning, and poor Brandon was nodding off next to me. We shook hands warmly and did the usual bro slap on the back, and Ahmed said I was welcome back any time. I went to sleep that night satisfied with the knowledge that my bro-cred in Khaldiya, Karak Province, was high.

One week later, the U.S. Peace Corps pulled all 37 of its volunteers, including Brandon and Toby, out of Jordan, as a pre-emptive measure against potential unrest or terrorist attacks in the country. I never made it back to Ahmed’s place in Khaldiya.

6 thoughts on “Bro-ing Out In A Jordanian Backwater”