Lying in the foothills of the Sierra de Guadarrama and the parched plains of La Meseta, the ancient city of Segovia is a hodgepodge of various civilizations and cultures dating back at least two thousand years. Because of its breathtaking location, its incredibly rich history, and the juxtaposition of vastly different monuments laying claim within its walls I am forced to conclude that Segovia is a fantasy.

I visited this lovely city a few days ago with Deena, one of my best friends from University who flew into Madrid to hang out with me for about a week (you’ll find out what we’ve been up to in the city in my next post). The first thing we did upon arrival was take a bus into the historic center, where the cathedral dominates the skyline. What it lacks in age–at less than 500 years it’s relatively new, especially given my interests in Romanesque architecture–it makes up for with charm and grace in abundance.

The late Gothic vaults fan out on the ceiling and draw your attention upwards, while the broadly spaced pillars below give the church a particularly airy feeling. Perhaps the architects were a little too focused on the presentation of open space, because the interior of the church was much cooler than the town itself.

A door in the south transept led us directly to a beautiful cloister, where the sun bathed the stone walls with slanted rays of warm light. Upping the awesomeness factor of the cloister was a room full of relics from the cathedral, but this paled in comparison to a Rococo-era salon lined with plush velvet benches and a throne–presumably for the bishop–at the far side of the room. 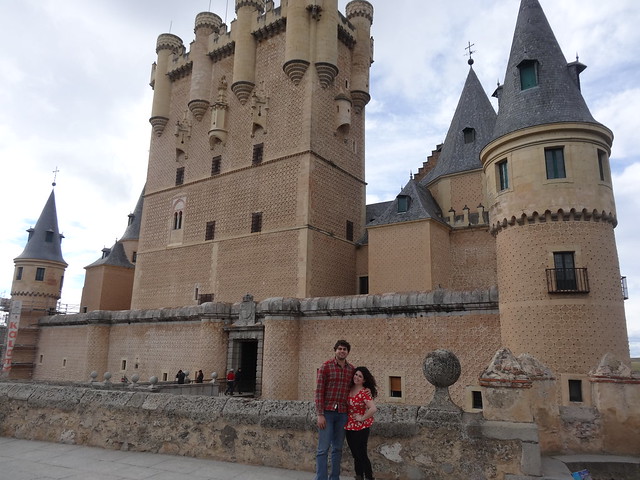 We wandered down a series of narrow streets before arriving at the edge of a cliff overlooking a steep river valley. Perched at the very top of it was the formidable Alcazar de Segovia, a truly Medieval castle complete with moat, turrets, throne room, and presumably a dungeon tucked somewhere deep inside.

Not unlike the Alcazar in Toledo, this castle was built on what archaeologists presume to be a Roman fortress. As happened so often in European cities, buildings, walls, and streets already constructed by the Romans centuries before were used as foundations for new buildings. At Segovia, most of the construction happened between the mid-12th and 13th centuries.

From the lofty heights of the castle the surrounding area is completely visible; I was especially amused by this lonely Romanesque church standing by itself in the valley below. As nice as the view was, the downside was that strong winds constantly pushed against it. Even with glass windows shielding us from the gusts it was cold, so it makes a little more sense now that the old kings of Castilla & Leon wore heavy robes and furs!

After we had our fill of the Alcazar we walked back toward the main part of town. Along the way we took in a 12th century parish church with a fantastic collection of mostly-intact capital sculptures. Unfortunately, the church was locked so we couldn’t go in, and we made do with viewing the exterior.

We saved the best treat of our visit to Segovia for last: the Roman aqueduct which carried water nine miles from the snow-capped Guadarrama. Although small sections of the Camino de Santiago still go by the original Roman roads which once covered Spain, they were mostly decrepit and did not make me stop and wonder for very long.

The aqueduct of Segovia is a different story altogether. I should mention that Deena studied Classics at Brandeis and has previously spent two weeks in southern Italy touring Roman sites such as Pompeii and Herculaneum. For her, this aqueduct was not the first Roman feature she had personally encountered, but we were both equally overjoyed at the sight of this two millennium old construction towering over the city square. As cool as it looked from below, we wanted to see what it looked like from above, so we trooped up a winding set of steps to the top.

As I gazed over the city and looked at the aqueduct stretching across the square and toward the mountains in the distance, I saw a head of clouds moving rapidly off the slopes and across the parched Meseta. The sun was mostly covered and the snow on the Guadarrama turned a pale shade of violet, standing out against black strands of pine. In that moment I was struck by the surreal feeling of time coming to a halt: minus the occasional rooftop antenna and the drone of buses in the square below, Segovia was a mixed tableau of Roman and Medieval history, and I was momentarily lost in a place that was neither here nor there. Segovia simply can’t be real.

9 thoughts on “Segovia Can’t Be Real”