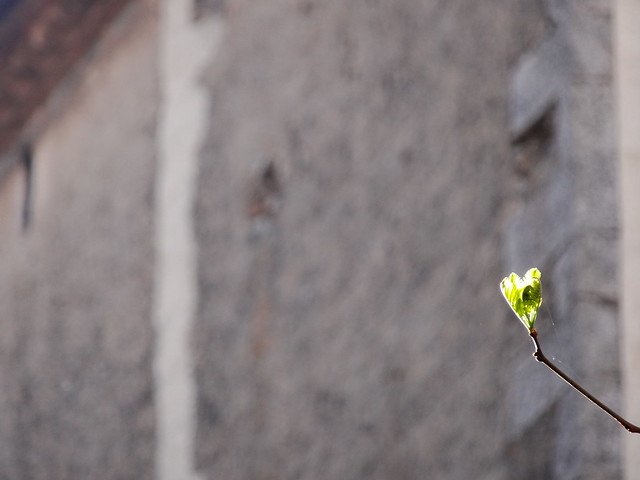 Girona has been the perfect antidote for my ongoing bout with a lung infection I caught in Morocco and the unfortunate series of events that led to me being homeless on my first night back in Spain. 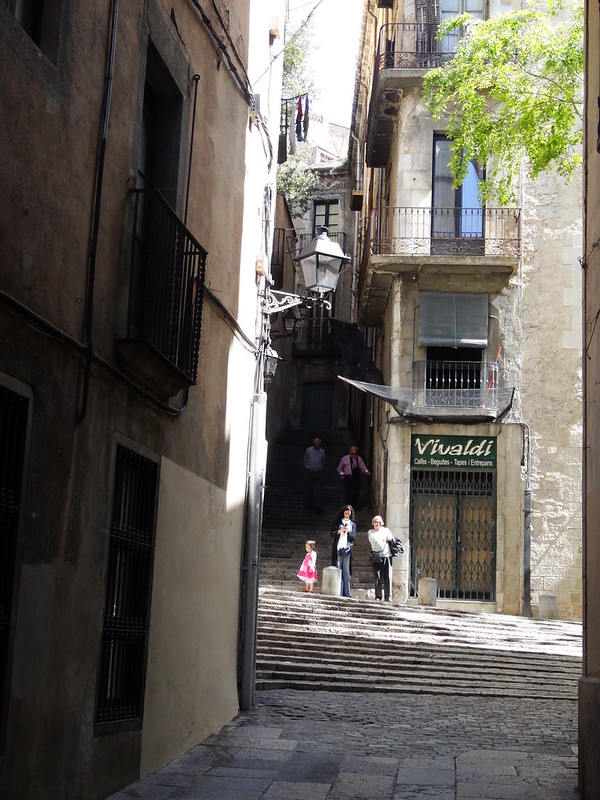 It is true that one’s surroundings play an important role in one’s well-being; being surrounded by nothing but 60s Brutalist concrete buildings would be extremely depressing. Likewise, being surrounded by charming cobblestone streets and mysterious stairways that whisper to you to climb them despite your pulmonary predicament makes for a positive mindset. 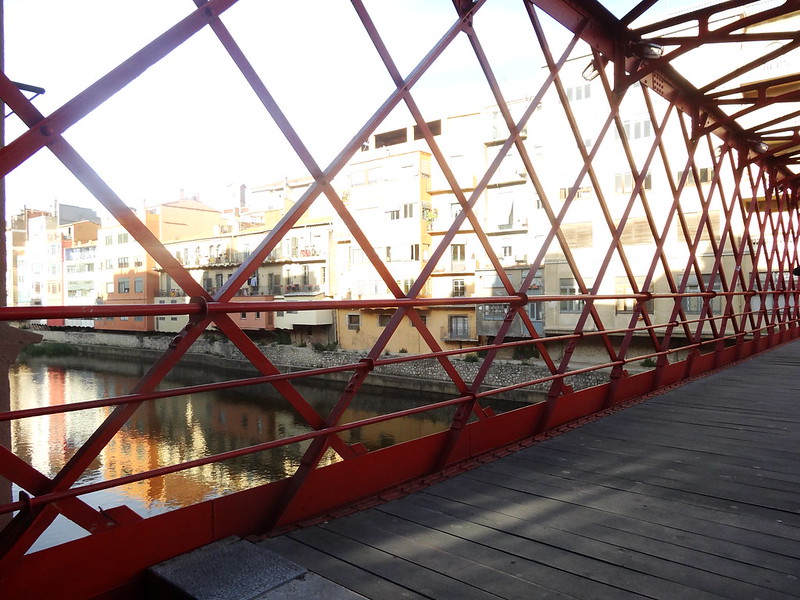 In Girona I took the past few days to sleep a lot (in a real bed!) and when I wasn’t resting I crossed this charming bridge designed by Gustave Eiffel–surely you recognize the name from a certain iron monolith in Paris–into the call jueu, which is Catalan for something along the lines of “Jew Street.” 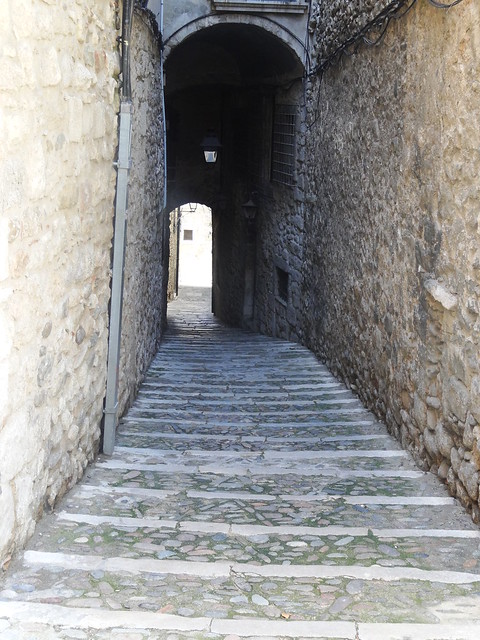 In the Jewish quarter of Girona is the Museu d’Història dels Jueus, and it offers some of the most clear-eyed and objective historical accounts of Catalunya’s rich Jewish history–indeed, of Spain’s Sephardic Jewish history–that I have yet to encounter. It is easy to boast of brilliant Jewish minds in Medieval Spain such as Nahmanides, also known as the Ramban and perhaps the greatest Western scholar and philosopher of the 13th century. It is not so easy to devote equal attention to the atrocities committed by an increasingly antisemitic royalty, clergy and general population, but the museum focused equally on the tragic and unjust disputes of Barcelona and Tortosa, which ultimately ended in the forced conversions of thousands of Spanish Jews. 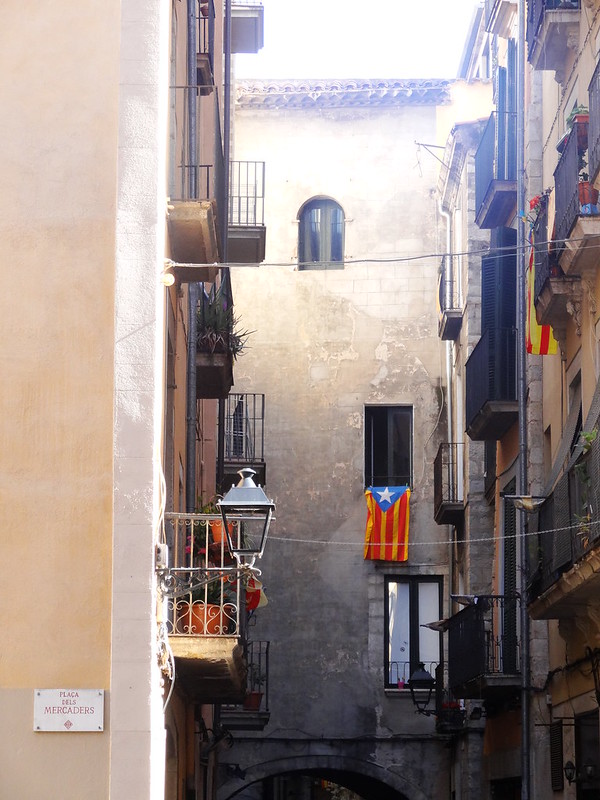 For all of Spain’s archaic beauty the museum was a sobering and saddening reminder that my people were kicked out of a country that most of them had called home for over a thousand years. Wandering the same streets where perhaps my own forebears once did business, went to synagogue, and raised their families brings mixed feelings. On the one hand, I feel sadness for the home we left behind; on the other, there is bitterness that it was taken away from us. 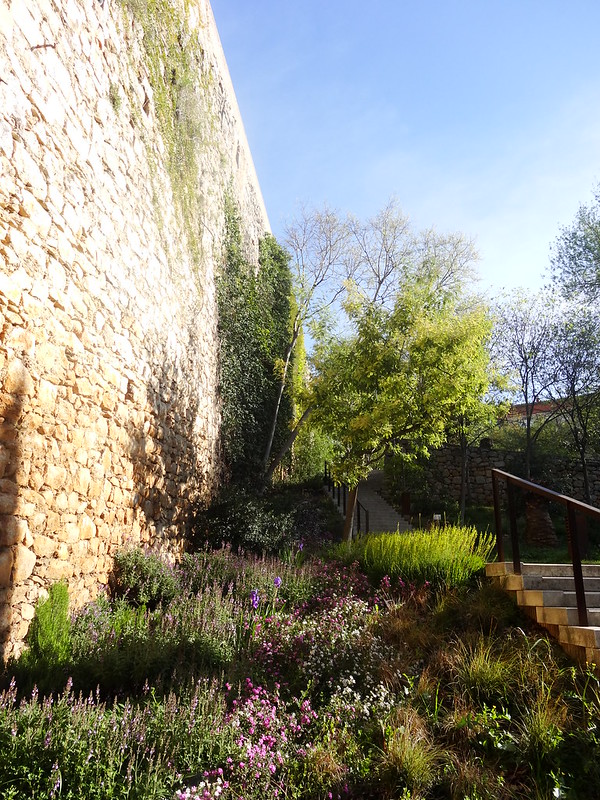 In the spirit of reconciliation it seemed fitting that a garden dedicated to John Lennon leads up to Montjuic, a small mountain on the north side of the old city which the Jewish community used as a cemetery. 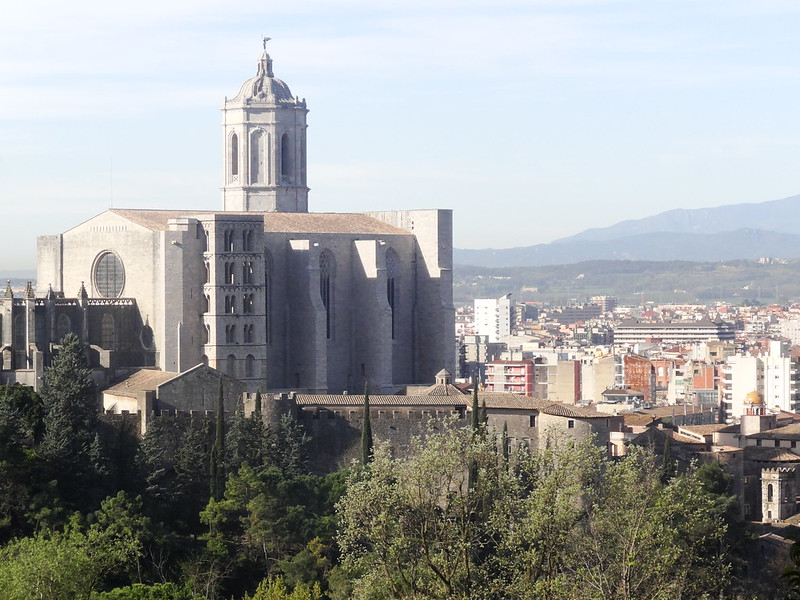 At the very top of the hill the city spreads out below, although the cathedral of Girona looms large, its thick buttresses and Romanesque north tower prominent against a backdrop of modern apartment buildings and the Pyrenees in the distance. 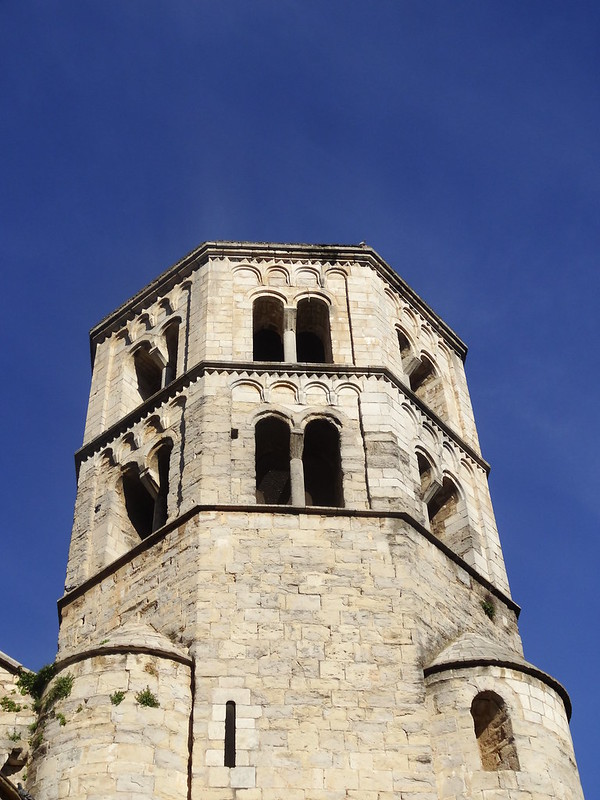 Back down the hill is the stupendous monastery of Sant Pere Galigants. It contains an extremely well-preserved cloisters with Romanesque capitals that date to the 12th century. 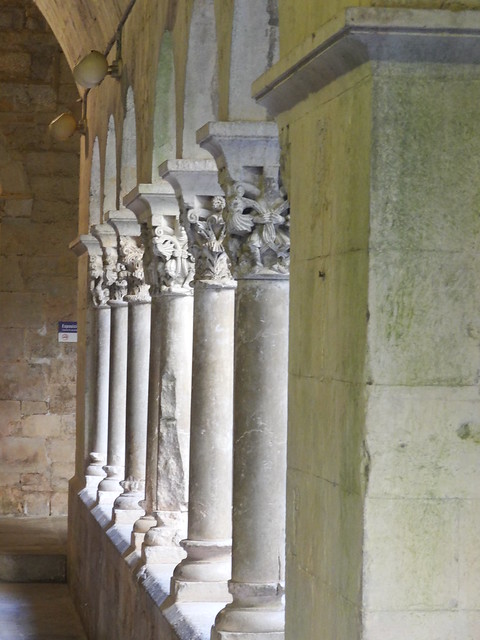 I was a bit unlucky in that it happened to be closed when I came by, but I still got a peek at the magnificent sculptures inside the cloisters. 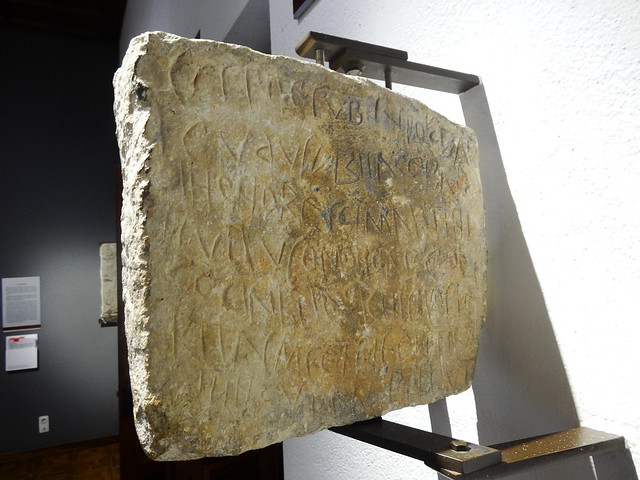 Disappointed though I was that the monastery was closed, I was redeemed by the Museu d’Art de Girona, which is housed in a very old building right next to the cathedral. The museum has a particularly strong collection of Medieval art, such as this Visigothic tablet. 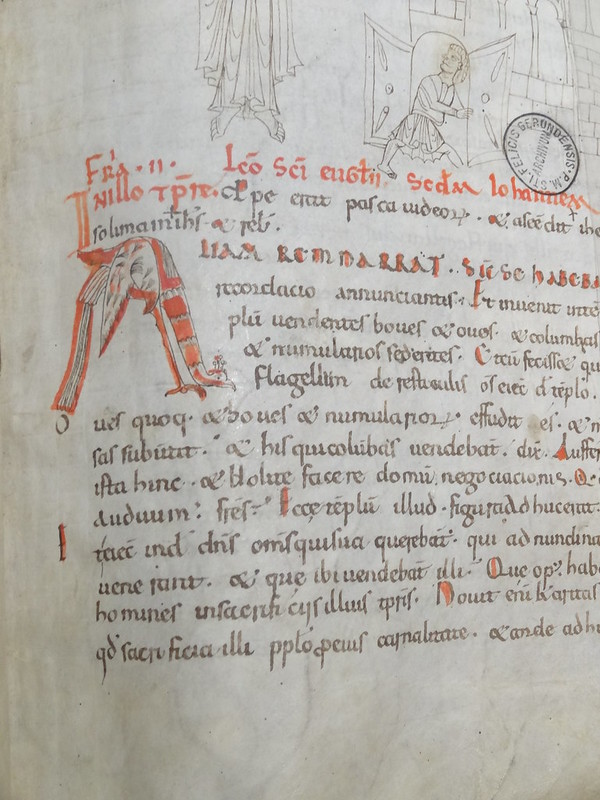 It also has a small collection of illuminated manuscripts, including this one featuring a bird contorted into the letter A. 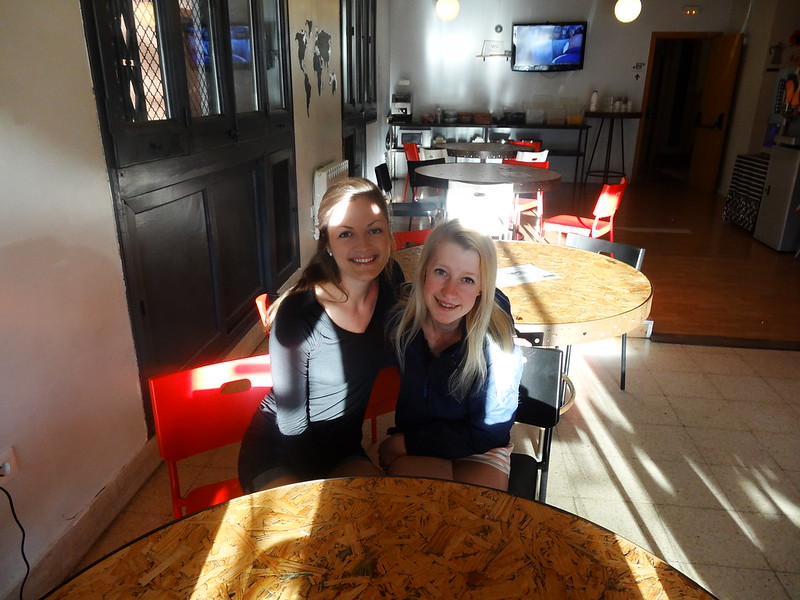 While I was taking a break at my hostel for dinner last night, I bumped into Mallory and Tiffany, two lovely ladies from Missouri on a short visit to Spain. They had returned from a disastrous bike ride to the coast and were recovering from six hours’ worth of sunburns. While we shared a bottle of wine (courtesy of them) and fried plantains with avocado (courtesy of me) they reminded me to visit the old wall here in Girona before I left. 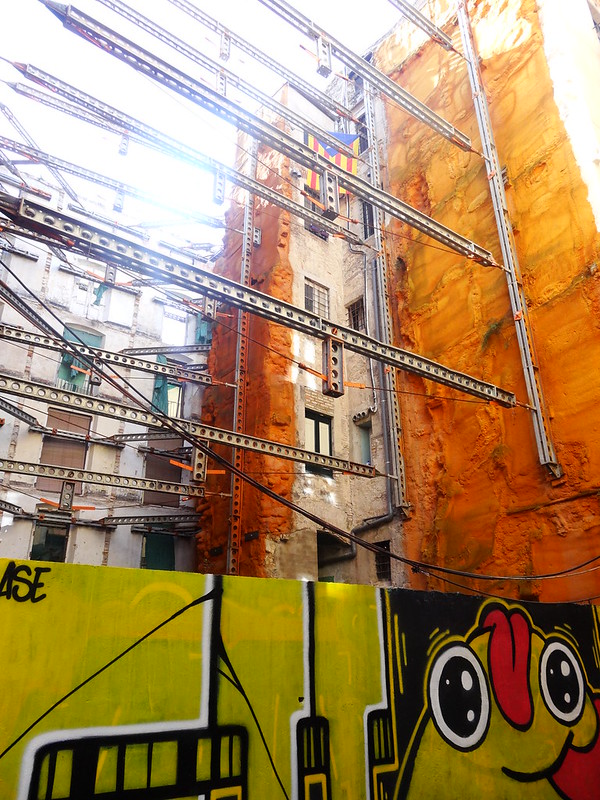 And so that was the last thing I did today. I set off down Girona’s narrow streets, pausing briefly beneath this very interesting construction site before continuing toward the wall, which was built by the Romans about 2100 years ago. 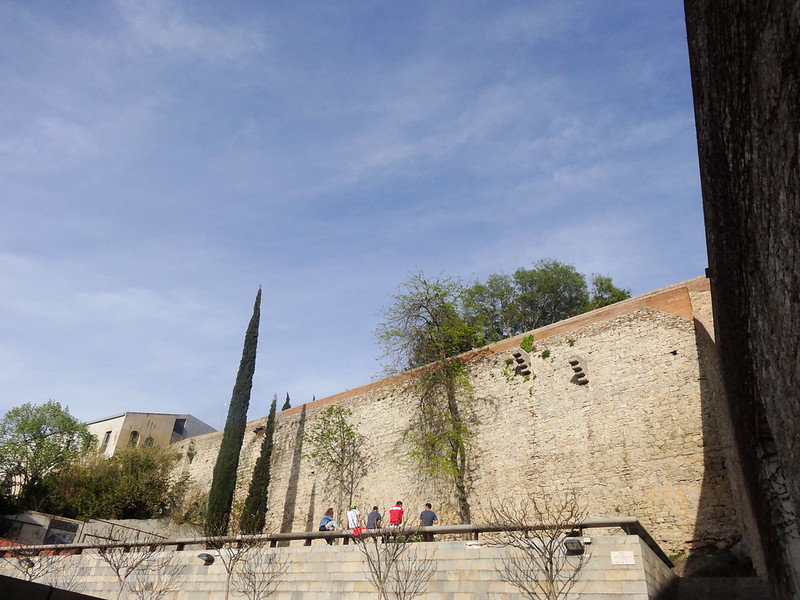 It’s a very, very big wall; probably as long as the one in Leon and just as imposing as the one built into Segovia’s steep bluffs. 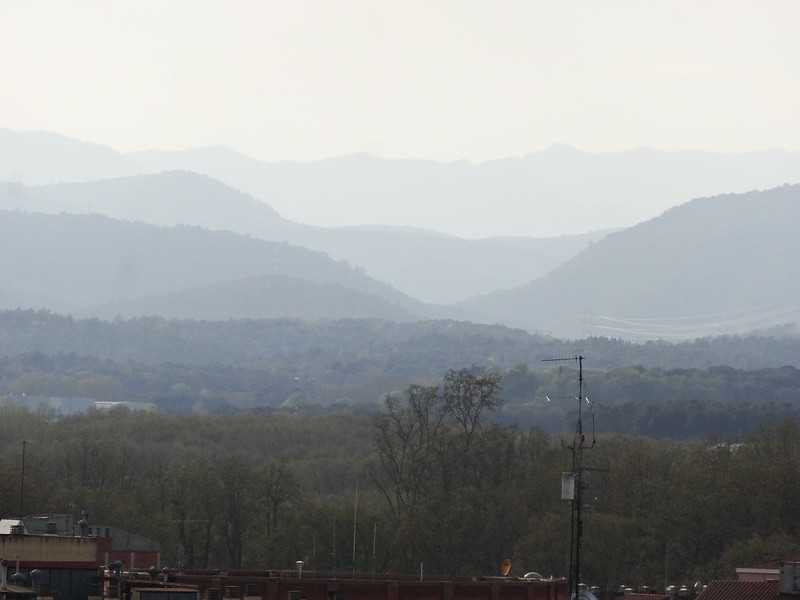 My traitorous lungs wheezed as I climbed up the wall, but when I reached the top and had a chance to travel down the length of it for a few minutes I looked west and had a clear view all the way to the Pyrenees. Just like the walls of the city, the mountains are timeless and have seen history run its course. The Iberians came; then the Romans, and the Jews. Then the Visigoths, and soon after the Moors. Then the Moors left, and so too did the Jews. Perhaps one day we will return; the streets will be the same as they were two thousand years ago, and so will the Pyrenees.

If this is your first time reading my blog, let me know in the comments section below! Wouldn’t it be awesome to see more cool places like this every time you opened your email? Following my blog is free, and I don’t believe in spam–click on the “Follow!” button up there on the right for updates on my travels and inspiration for the next time you go somewhere new!