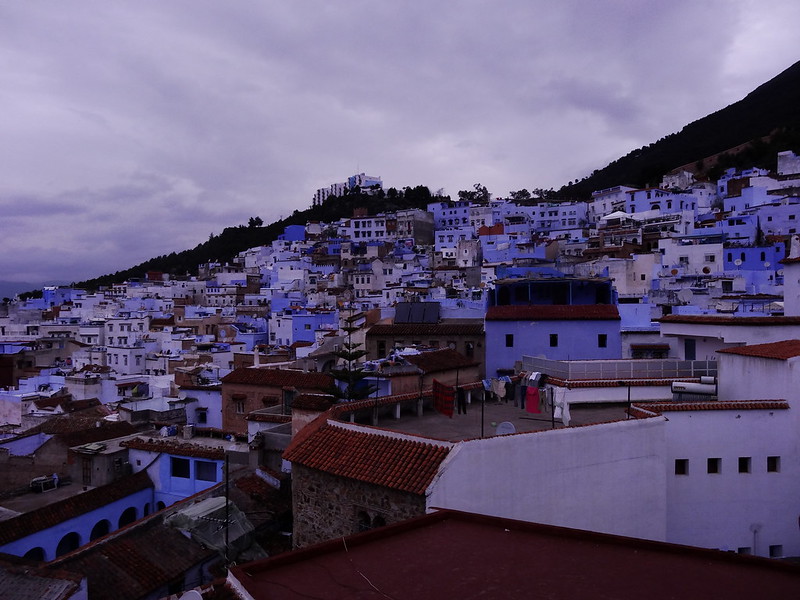 I staggered off the bus from Rabat, my knees sagging from the fatigue of the cramped switchback ride that crossed the lushly forested yet rugged Rif Mountains. This was the last ride into the city and although I saw lights peeking up the steep mountainside Chefchaouen seemed a bit drawn in on itself for warmth against the harsh cool air of early spring. Out of nowhere Vicky appeared and we started walking steeply uphill toward the Medina. We hadn’t gone more than a few minutes when I almost keeled over from shortness of breath; I had been coughing heavily on the ride over and was dehydrated. I made the executive decision to order a taxi uphill, and luckily one arrived to haul us quite literally up the side of the mountain into the center of town. Within minutes I collapsed into the bed in our hotel and fell asleep. 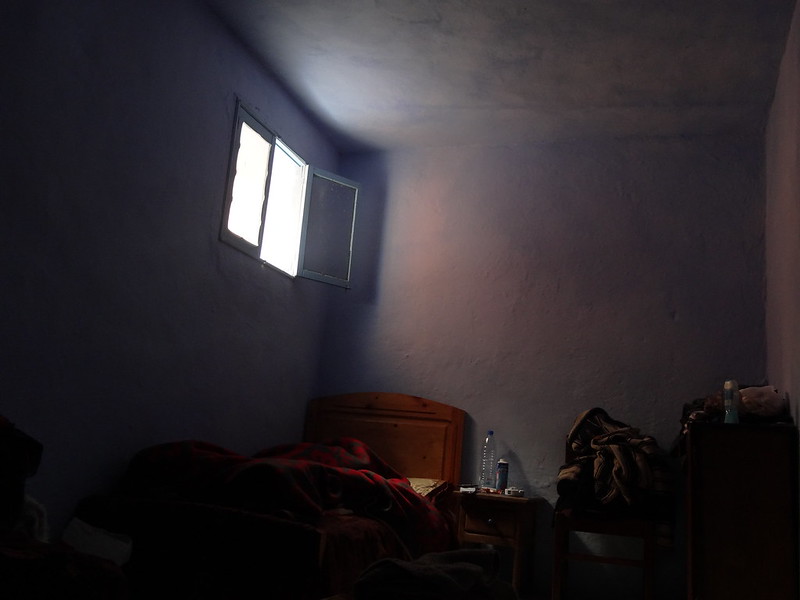 The next morning I woke up to light spilling through the room and realized that despite not having any sort of fever or noticeable fatigue I still had trouble breathing, so I set off for the hospital. 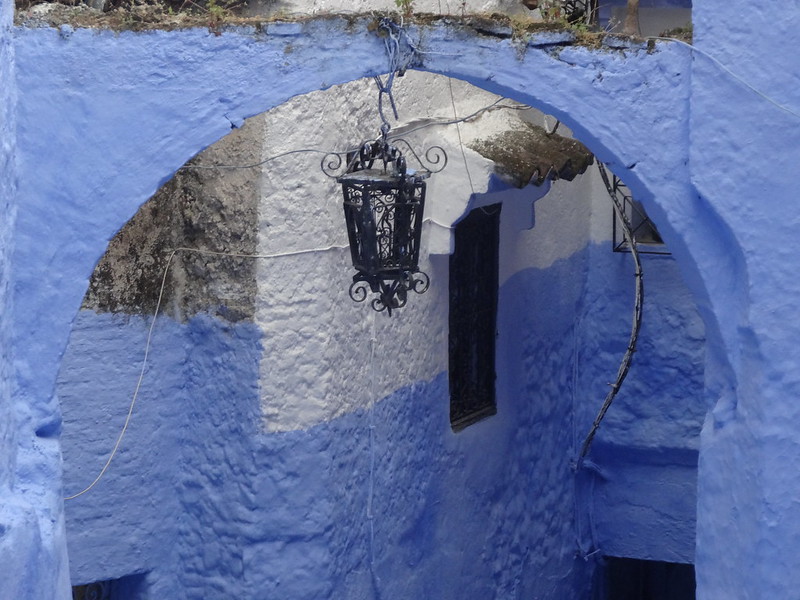 Clever and capable lad that I am, I thought briefly about walking through the Medina to the hospital, then ruled that out as common sense mercifully took over and took a cab instead. I braced myself for all things insane and Moroccan at the entrance to the ER. 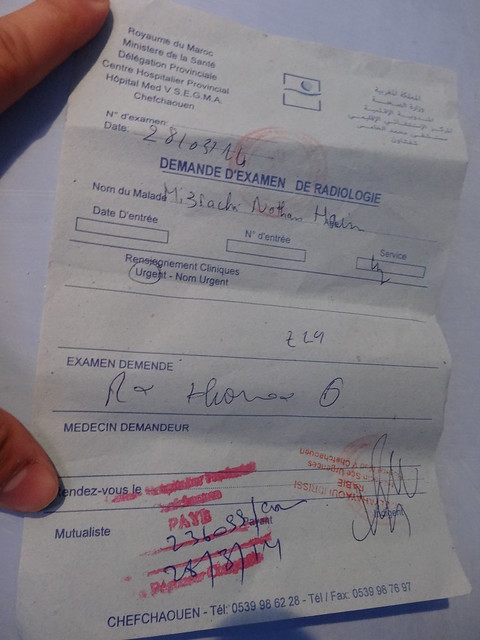 The truth was, Chefchaouen’s urgent care wing was pretty neat, orderly, and clean. No one asked me to watch their herd of goats while they went to fill out forms; no impromptu surgeries were conducted in the waiting room. Instead, I was aided in Spanish almost immediately upon entry and guided to wait for an X-Ray.

This was something which did strike me as a bit odd: there was a chart tracking the number of X-Rays administered by the hospital in the last five years, increasing steadily from about 10,000 to 15,000 over the course of time. The machine they were working with was a high-powered gem manufactured by Siemens, and the thing worked sort of like Terminator if Arnold Schwarzenegger was a radiology orderly, zooming mechanically around me and within seconds dispatching radiation waves through my chest.

Soon after, a doctor listened to me breath a few times, glanced briefly at the shot of lungs and pronounced them infected–something which I suspected did not require the usage of X-Ray technology, but I was happy for a reasonable-sounding diagnosis. After leaving the hospital with a list of prescriptions I went back to the hotel and found Vicky and Alina, who at this point was in her own private hell of illness. After sleeping most of the day we decided to give Chef a go and walked around a bit. 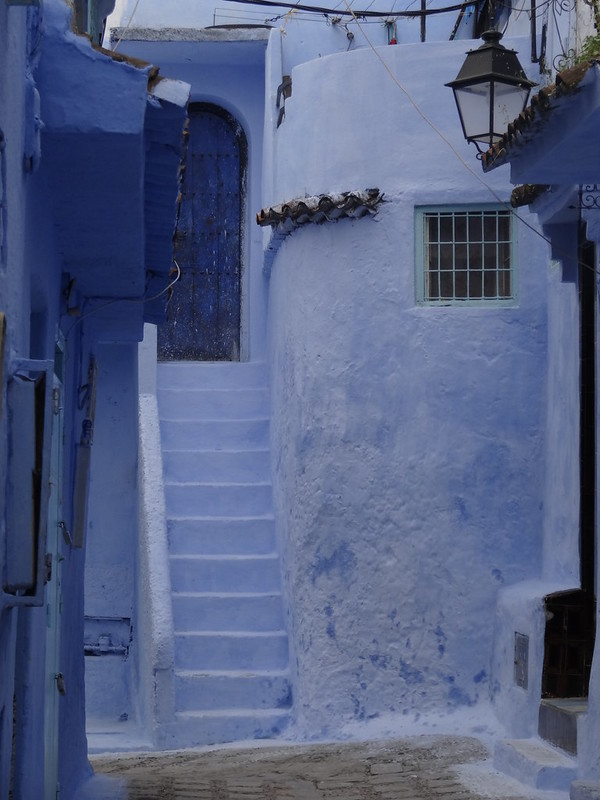 The blue walls of this city do have a mystical effect: they seem to suggest the whole place is on the verge of sleep. Compared to the raucous Medina of Marrakech Chefchaouen is a place you can float through. 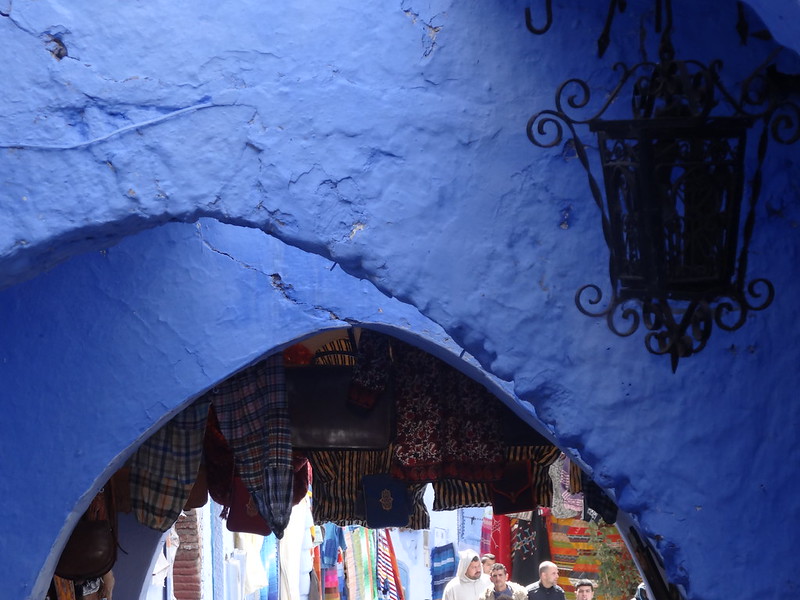 The somnolent archways create space for all sorts of opportunistic creatures to occupy: many of them will offer you hash at the best price; some might ask you if you’d like to visit their farm. 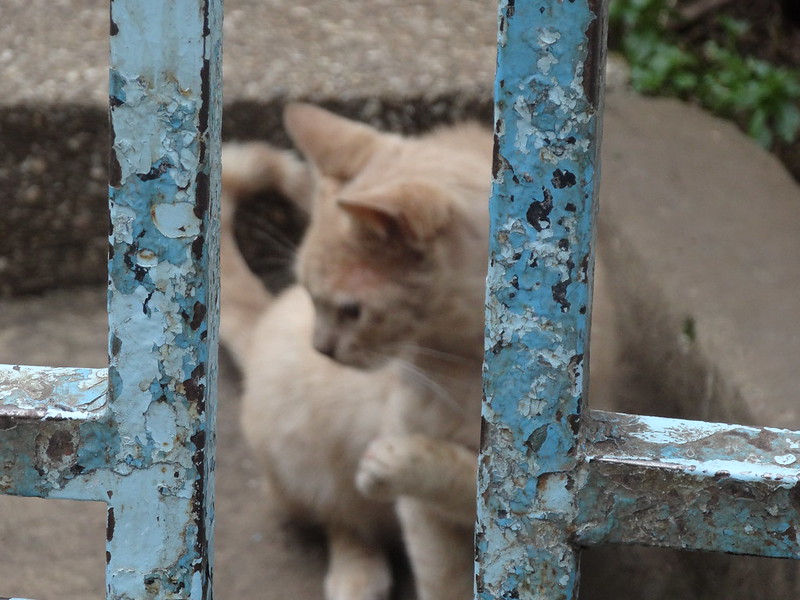 Others seem to be more interested in being left alone, unless you have a scrap of chicken for them and can offer them a friendly pat on the head. The same goes for goats, by the way–I didn’t pull out my camera for fear one would turn it into a crunchy and very expensive snack. 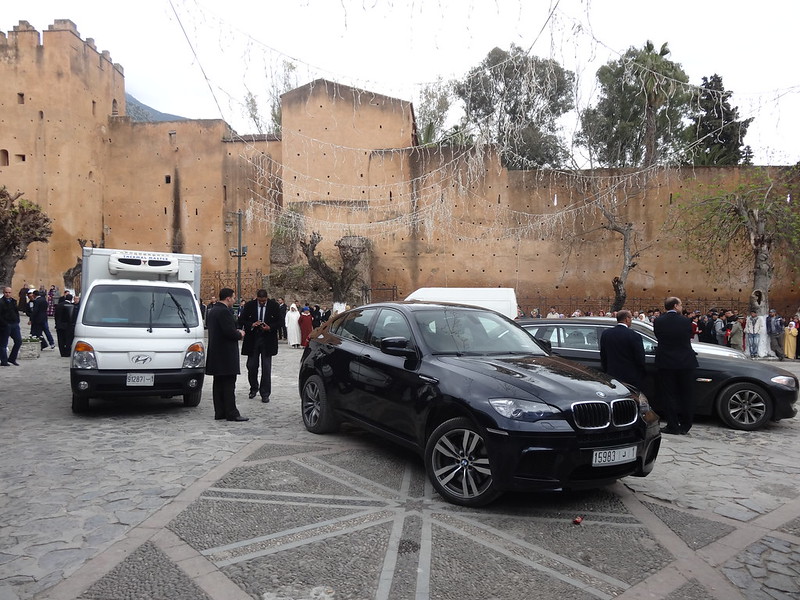 As we walked back to the center of town we passed by an entourage of fancy imported cars that looked like they had just rolled right off the lot. In Morocco, this means royalty: Apparently, a prince from the royal family was visiting town. Crowds began gathering in the main square and lined streets leading up to it–men wearing suits and sunglasses quietly patrolled the area and somewhere in one of the more posh hotels a truck full of suitcases carrying ridiculously expensive clothing was wheeled in for someone to wear in front of adoring subjects.

The knee-jerk American reflex is to sneer at monarchy and congratulate ourselves for kicking out the British. Of course, this is followed by the realization that in my country the amount of wealth concentrated in the hands of very few people means we’re not so far away from what I saw yesterday in Chefchaouaen. I have little knowledge of Moroccan history apart from what I hear from locals here, and most of them have said they respect the king; many hang his portrait in their homes and businesses our of sheer adoration. Yet I have encountered more beggars on the streets of Morocco than anywhere else. I have met farmers, dental technicians, pastry chefs, vintage shop owners and teachers. I have seen what the middle class looks like and what indignities it accepts as routine, and I say this to the Moroccan royalty: 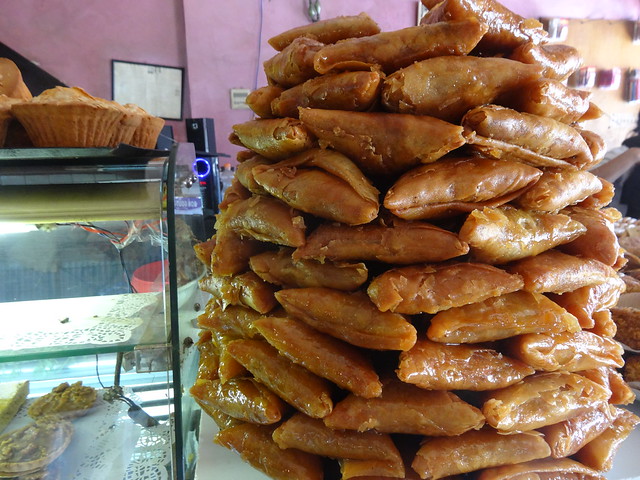 Your wealth drips like honey from the best pastries and yet I wonder if you realize what your people content themselves with for just a trickle of that honey, what living conditions they endure so that maybe instead of buying fancy German cars you consider building libraries for the illiterate to read in. Maybe you would consider not buying accessories and bags from Luis Vuitton and instead fund that money toward building better public water systems for people, or cleaning up the streets so they don’t teem with refuse. Putting X-Ray machines in hospitals is a good start, but don’t you think you owe them more?

6 thoughts on “Everyone Gets An X Ray, No One Gets A BMW: Chefchaouen By ER And A Question Of Wealth”