It was 9 PM, I was sitting in a dusty parking lot somewhere in Tel Aviv’s gritty Florentine district, and one of my friends was heaving vomit behind a dumpster. The party had started 7 hours before, but we were determined to last til midnight. 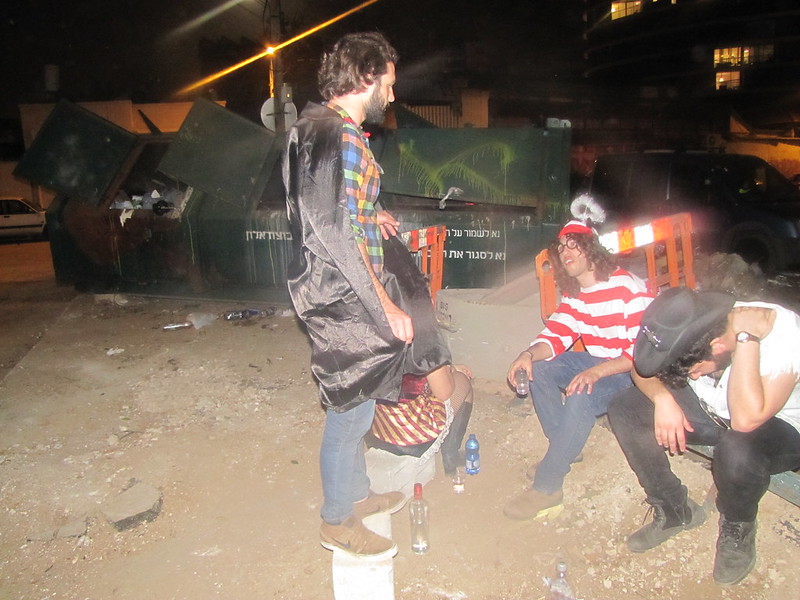 Music from a nightclub just down the street was blasting away, the muffled bass thumping in our ears. A noxious mixture of vodka and pineapple-flavored club soda was making the rounds, but I passed it along without taking a swig. 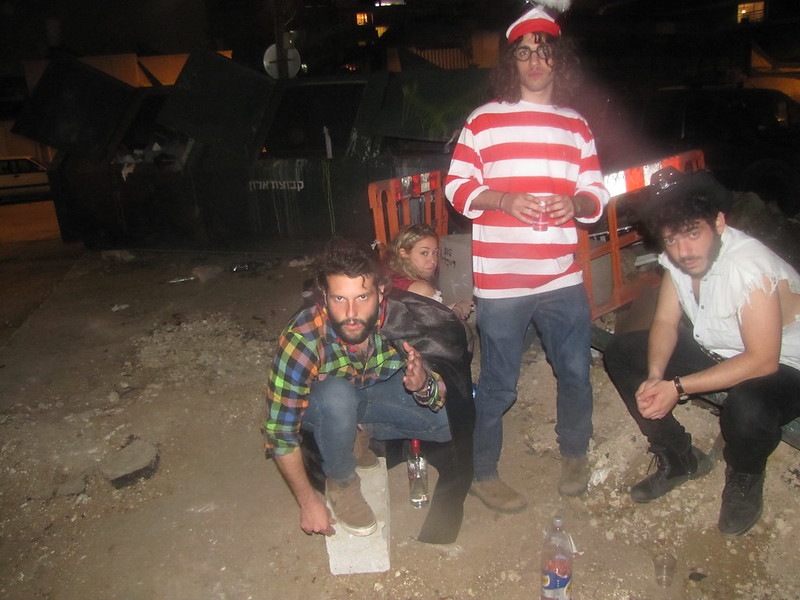 At this point we were a collective shitshow. Noam had spent most of the day barreling into objects both inanimate or otherwise. Gai, who had dressed up as Mungo Jerry (of “In the Summertime” fame), was hitting the wall after going the entire day without consuming any substances other than booze. Amit was on his third day in a row of partying. Canadian-born Britney was reeling from the combination of prolonged exposure to sunlight and beer.

It was my last night in Israel before my 6 AM flight to Istanbul the next morning, and I was determined to end it on a high. In the spirit of Purim, the Jewish holiday which celebrates the last-minute foiling of a Persian plot to kill the Jews over 2,000 years ago, we dusted ourselves off and hustled over to the club.

Roughly 10 Hours Before That Happened, I Was 19 Floors Above Tel Aviv 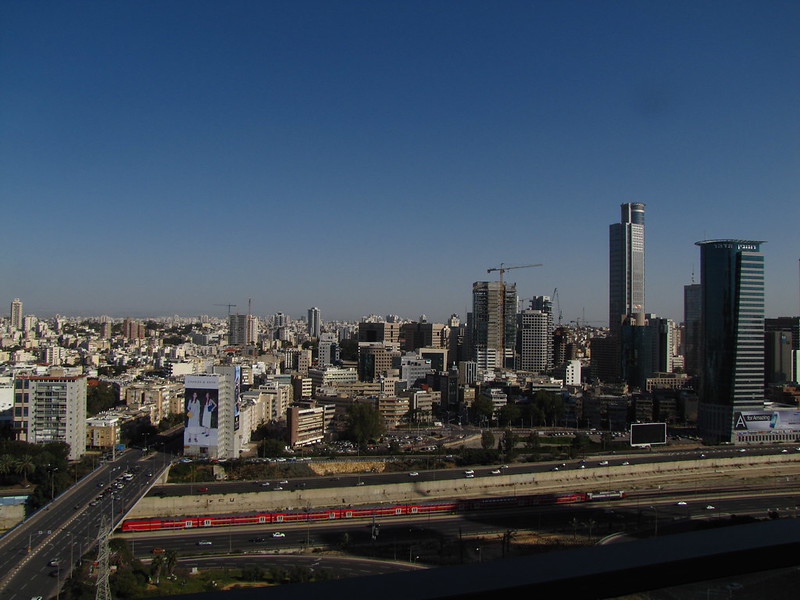 My cousin Noam knows all sorts of people. Apparently, one of them is a girl whose daddy is very, very rich. A girl named Lee invited us to her apartment to pregame before heading down to the street party happening below. 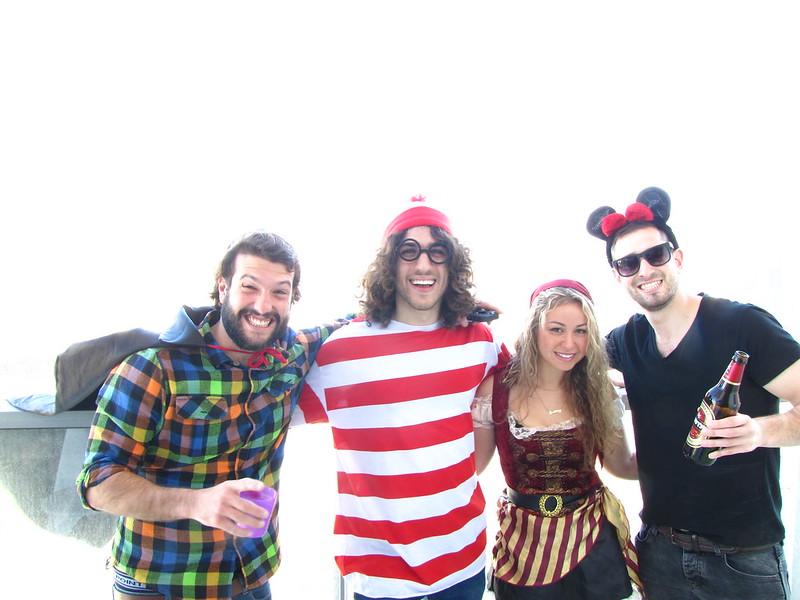 Pretty much everyone–except for me–was dressed up in costume. Amit was wearing a cape, Noam was “Where’s Waldo,” (or “Ayfo Effy” in Hebrew”), Britney was a pirate, and this dude whose name I don’t remember was Minnie Mouse. 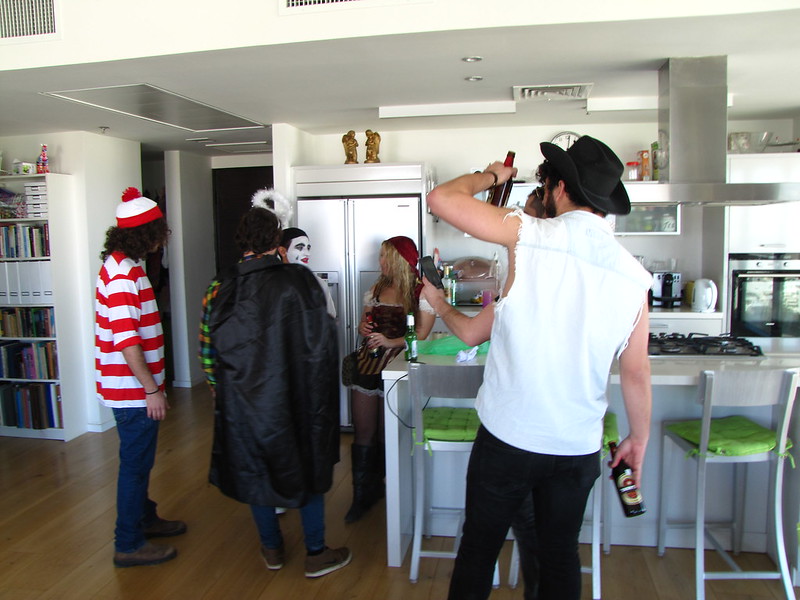 Israelis may not have the same reputation as the Irish or Germans when it comes to holding down their alcohol, but they day drink with gusto.

After an hour or so of lubricating our gullets with beer, vodka/cranberry cocktails, and sweet white wine, we staggered into the elevators and descended to plebeian level. 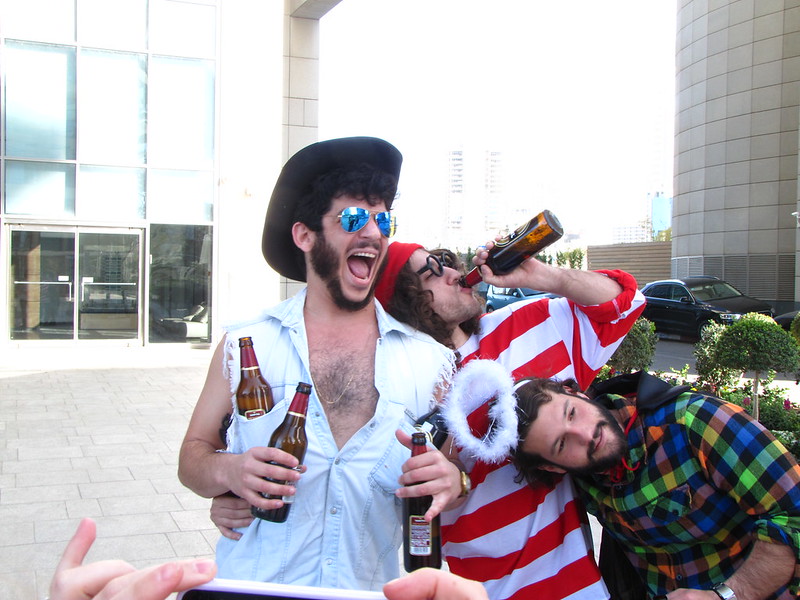 The streets were full of people dressed up for Purim; I hadn’t seen this many drunken costumed people since last spring, when I participated in the debauched Aalborg Carnival. 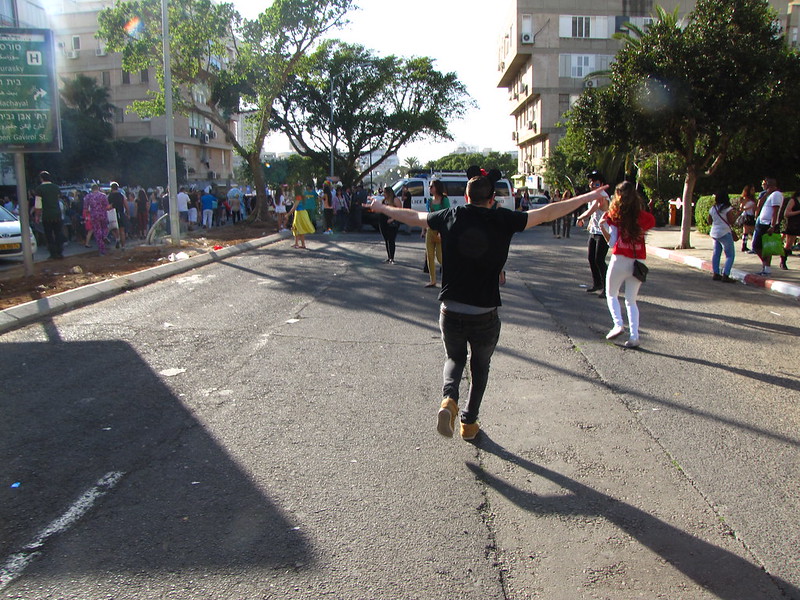 Unlike in Denmark, I refrained from walking around with a sign offering free breast exams, instead opting for the less-raunchy #YOLO. 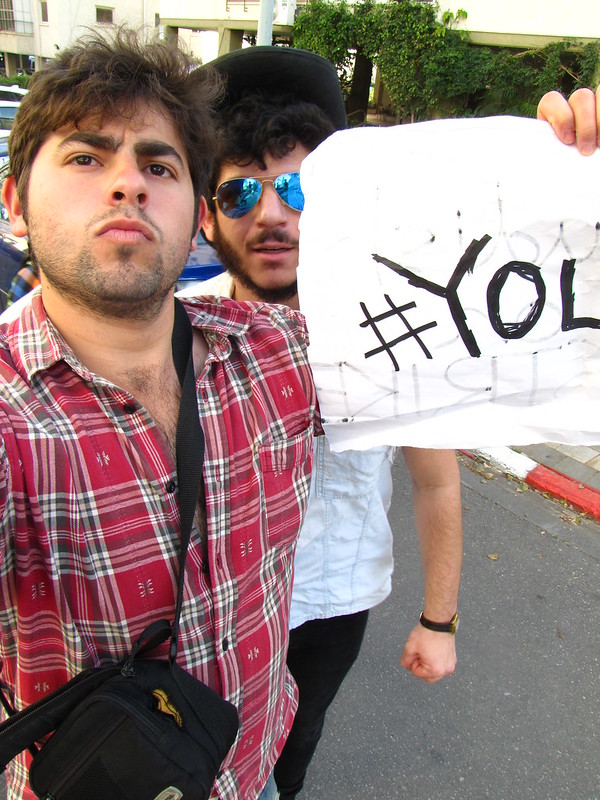 There was a significant amount of tanned skin showing, much of it of the pleasingly female variety. 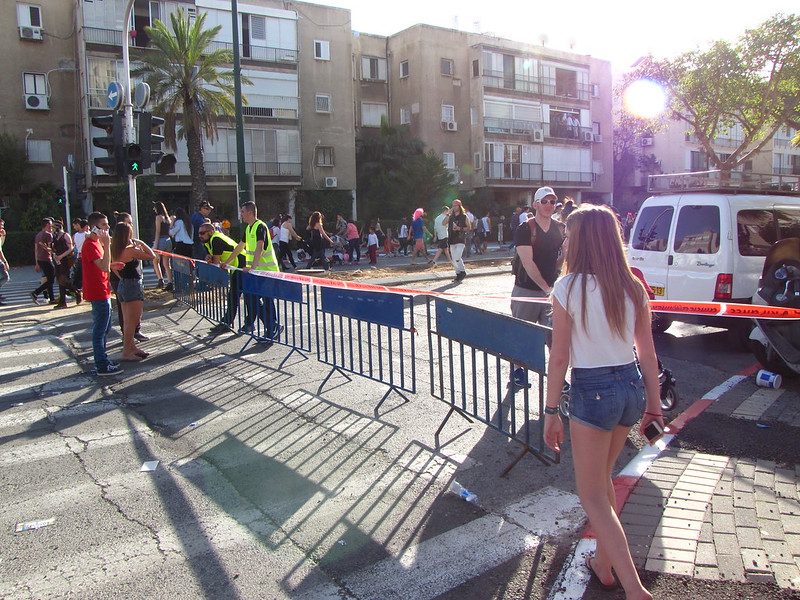 Eventually we made our way to a huge square (which was actually shaped like a circle), packed with partygoers. Heat radiated in equal amounts from the sun above and the mass of bodies bouncing aggressively to house music. This was exactly the sort of scene I had been looking forward to. 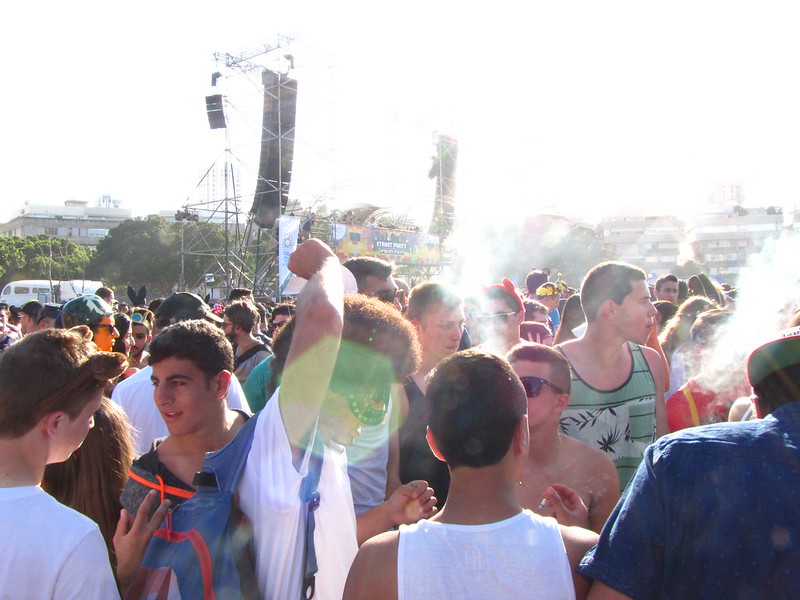 We were immersed in sound, perfectly intoxicated, and reveling in the moment with tens of thousands of others; even when the music was at a lull we were dancing and singing loudly. No one cared though, because everyone else was having just as good a time as we were. 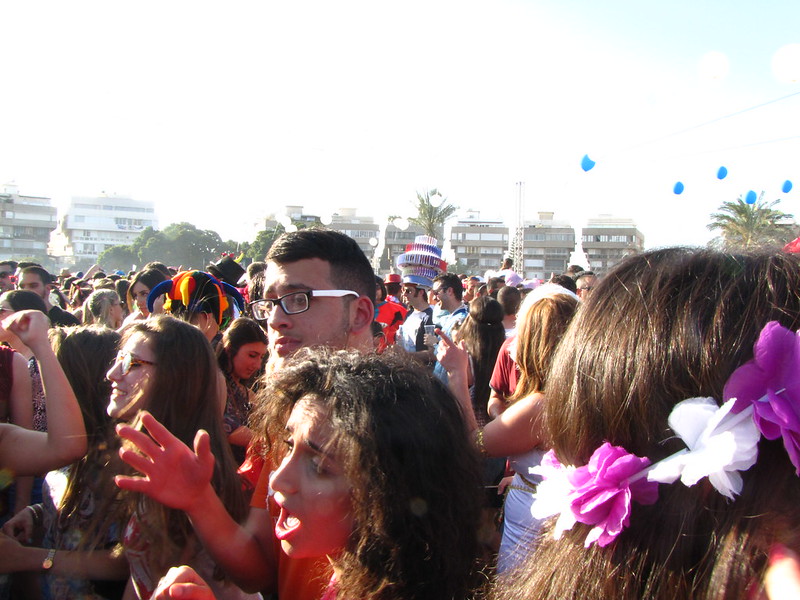 Finally, as the sun began to set the music stopped and people began to disperse. Of course, this was only the end of Round 1, and we knew it. Noam knew of another party happening in Florentine, so it was decided we would try to get there. 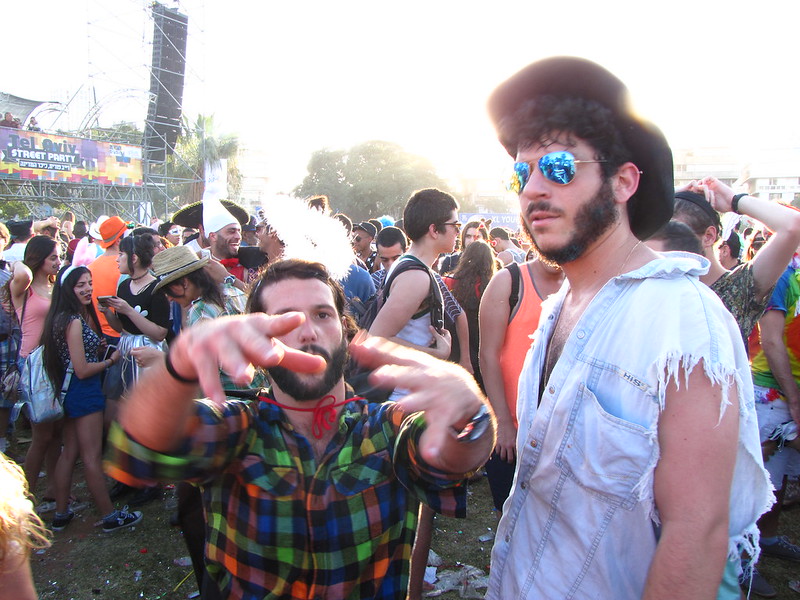 This was when we realized that everyone else was trying to go in the same direction.

Traffic was at a standstill and every bus and taxi that passed us was full. So we decided to walk. If you have ever walked a good distance while drunk before, you know that it seems to take forever. Even though we probably only covered 3 or 4 km it took us over two hours to reach Florentine.

This was in part because we were starving and stopped for burgers at a supercrowded fast food joint–but still, it felt more like an epic quest than a simple neighborhood jaunt. Humor me.

By the time night fell we found ourselves sitting in that dusty parking lot, swigging vodka and killing time for another friend who was due to arrive. I was twiddling a scarf which I had found lying in the street (don’t worry, it was clean). I’m still not sure how I lasted from noon til midnight, but time does fly when you’re having fun. 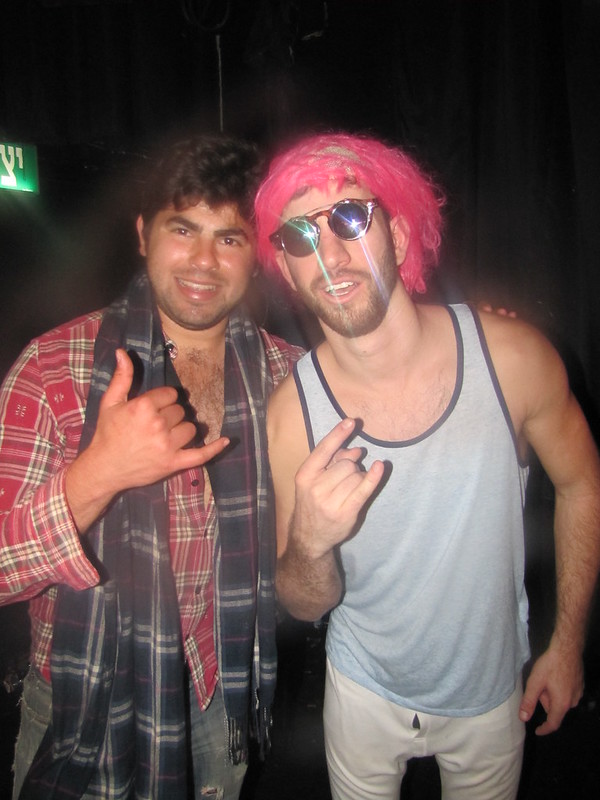 Several hours later I was blinking under the harsh fluorescent lights of Ben Gurion Airport, a formidable odor of sweat and booze reeking off of me. Purim 1, Nathan 0. It was time to go to Istanbul and I was all Purim’d out.