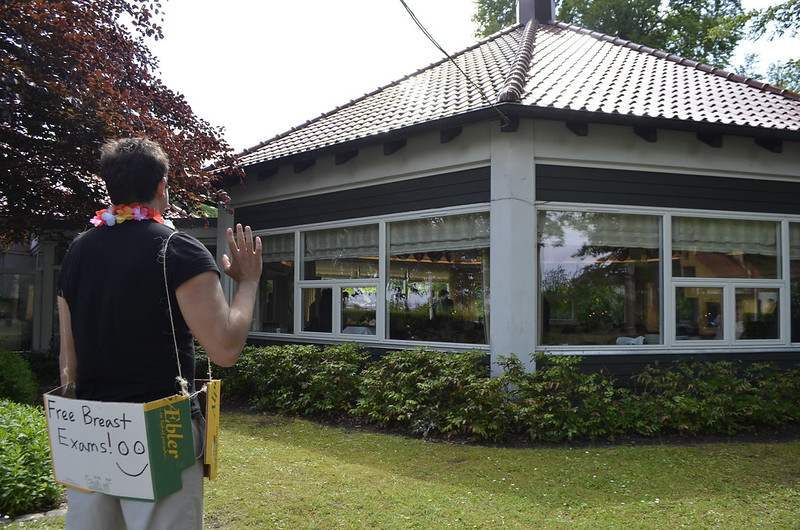 I know it was my idea, but I don’t recall anymore how it came up. For the Aalborg Carnival this past weekend I decided instead of dressing up in conventional costume, I created a sign that said “FREE Boob Exams” and wore it over a plain t-shirt. 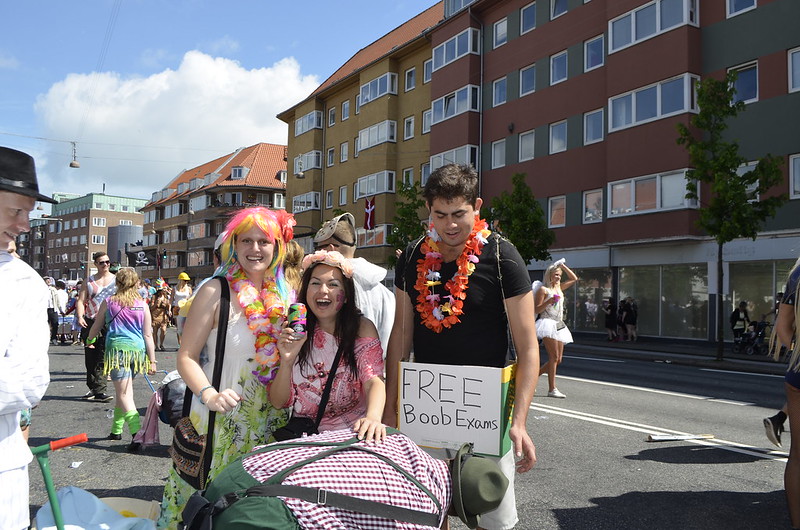 The results were spectacular, but not entirely as I had conceived them: I “examined” a little more than a dozen women but it was the men who thrust themselves excitedly at me. The final count was something like 13 women and 40 men (I must say that most of these men lacked breasts of any kind, but I remained professional nonetheless and gave them a clean bill of health). Plus there was the one drunk in lederhosen who tried to examine me below the belt. 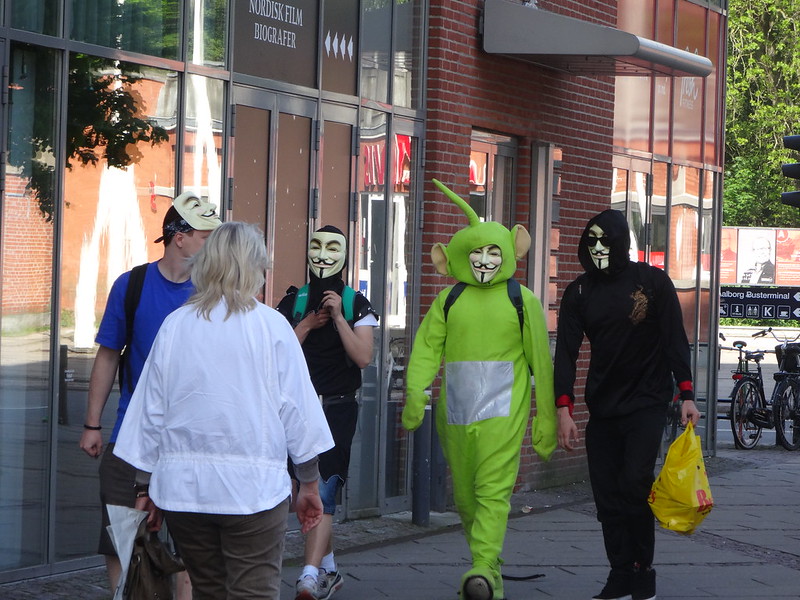 I entered the fray early in the morning with Line, a Danish girl from Odense who I met couchsurfing the night before. The green Teletubby in a Guy Fawkes mask was merely the tip of the iceberg of weirdness we were about to slam into at full speed. 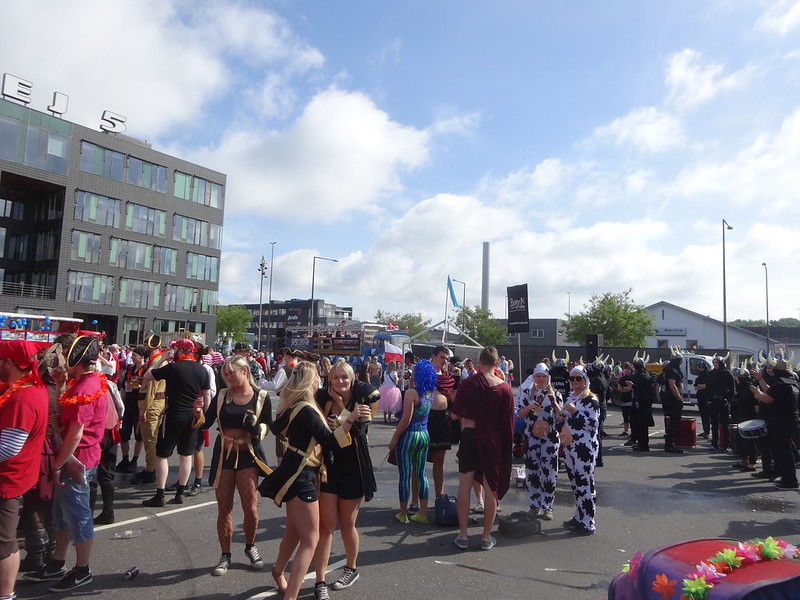 Line and I took a bus with a group of fairies, a man in a black body suit, and several bemused elderly women to one of the rally points for the Carnival parade. Mayhem greeted us and it wasn’t even 10 AM yet. 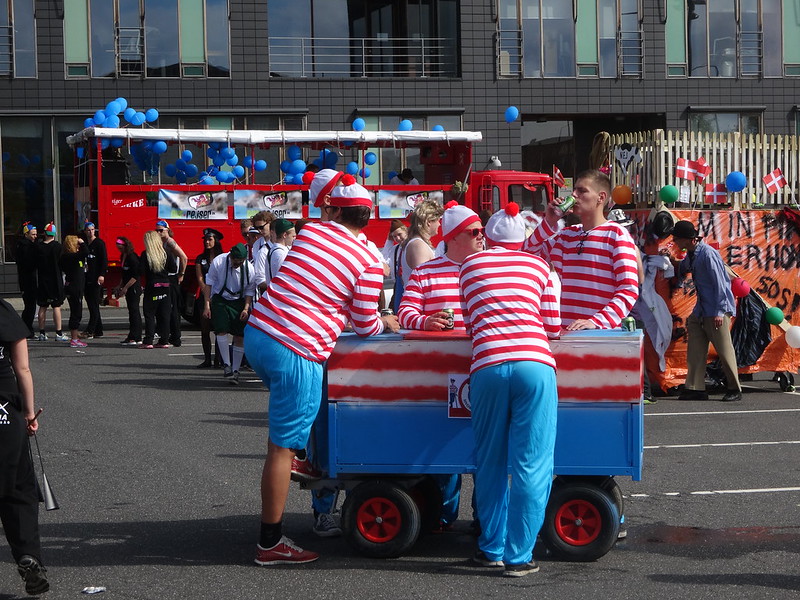 Apparently there’s a theme that people follow every year but I wasn’t really aware of it. In any case, groups of just about every type of character imaginable were lolling about with parade floats full of liquor. 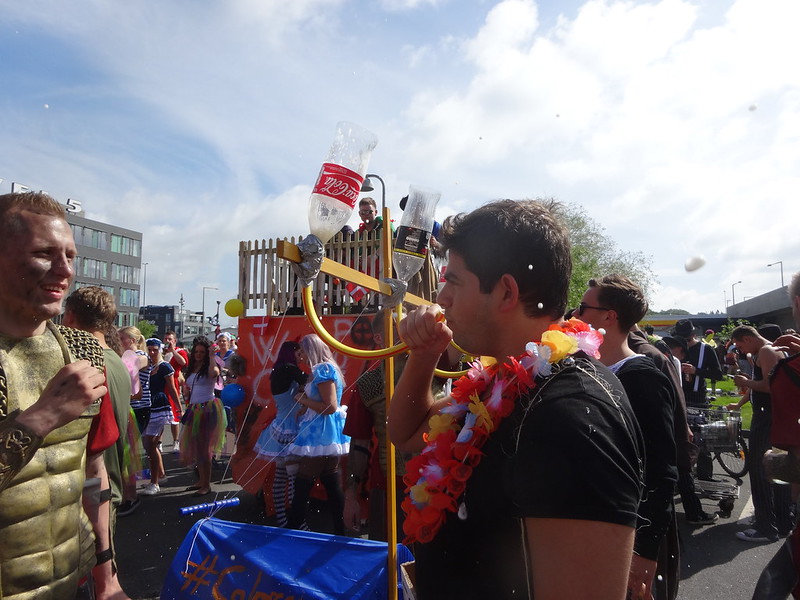 A gregarious Centurion dragged me over to his beer funnel and insisted I have a drink–the first of many freebies I downed that day. 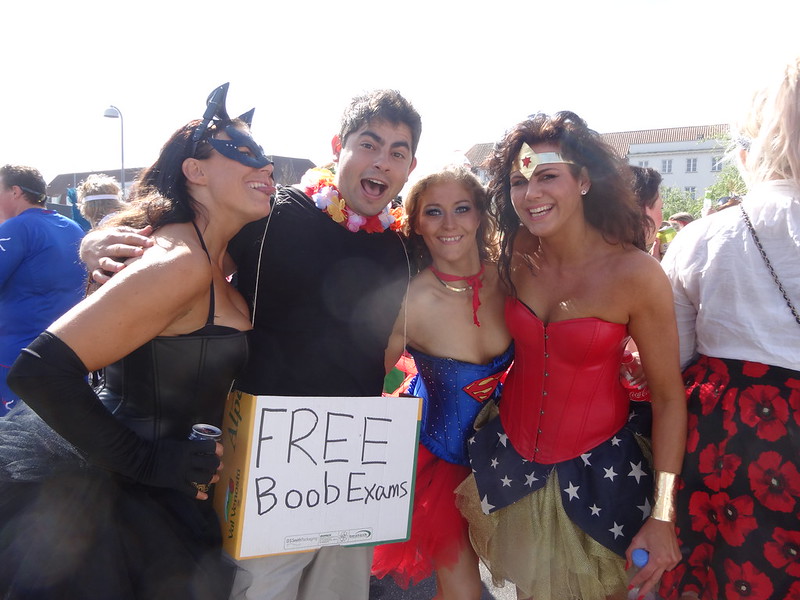 Not long afterward, I bumped into these three superheroines. They insisted I inspect each of their breasts in turn, which I was only too happy to do. Catwoman had quite the pair, and maybe it was jealousy that inspired Wonder Woman to tell me that she was saving up money to buy a bigger set for herself. I told her that each pair of breasts is its own beautiful and unique snowflake and not to bother. 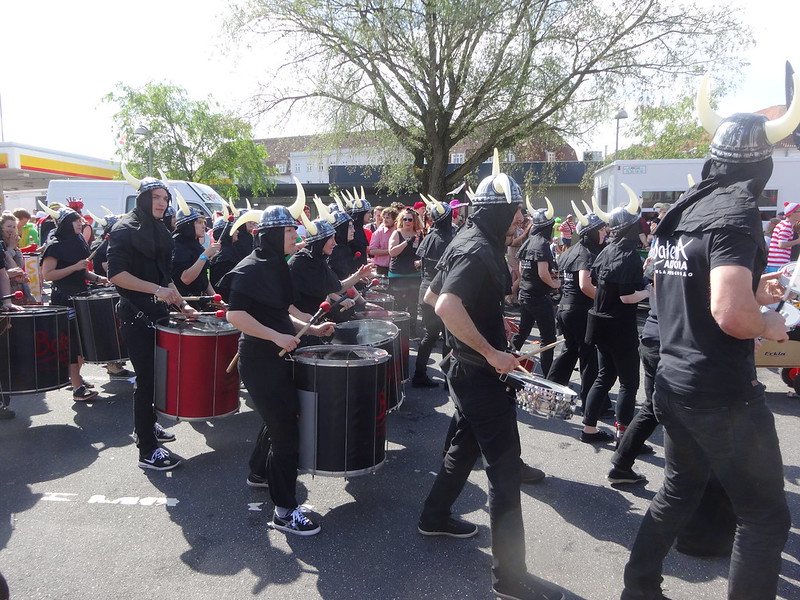 Soon the parade passed by, and we all joined up. A gaggle of drummers wearing Viking hats led us out onto the street. 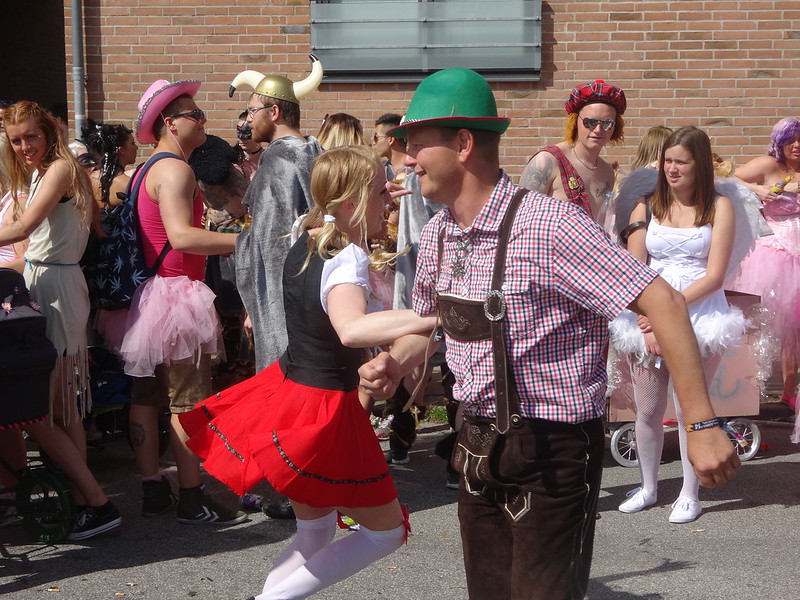 Adjacent to a parade float that was probably meant to resemble a Bratwurst but looked more like a penis, two Danes in German costume danced merrily. 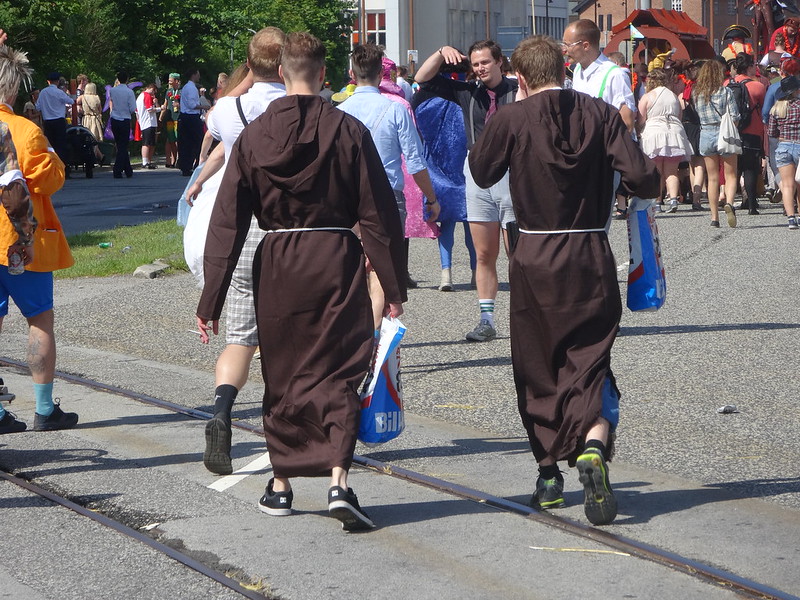 Speaking of making merry, there were a lot of inebriated monks around. It’s been 1500 years since St. Benedict wrote his rules for monasteries and there are still drunken brothers floating around. 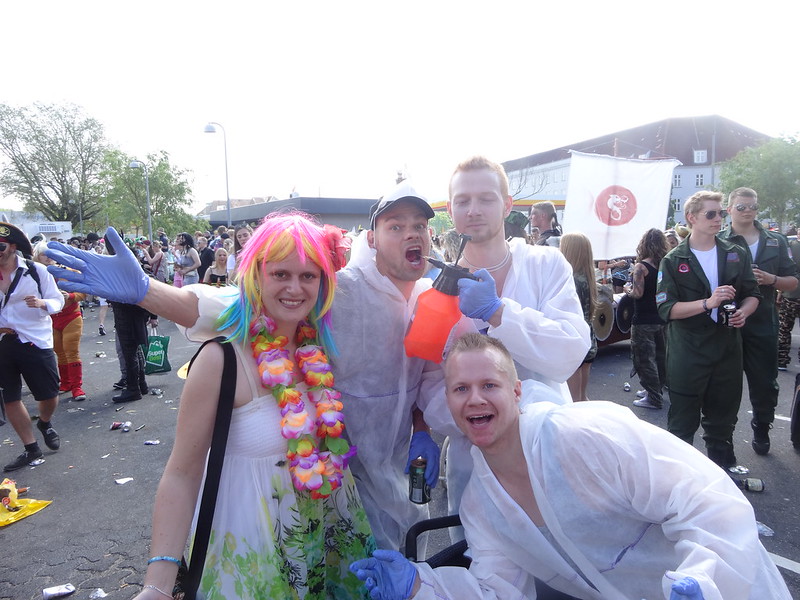 One of the more clever ways of administering alcohol that I noted were these house painters, who carried high-pressure sprayers filled with God knows what sort of mix. Line and I tried a few squirts each just to be polite. 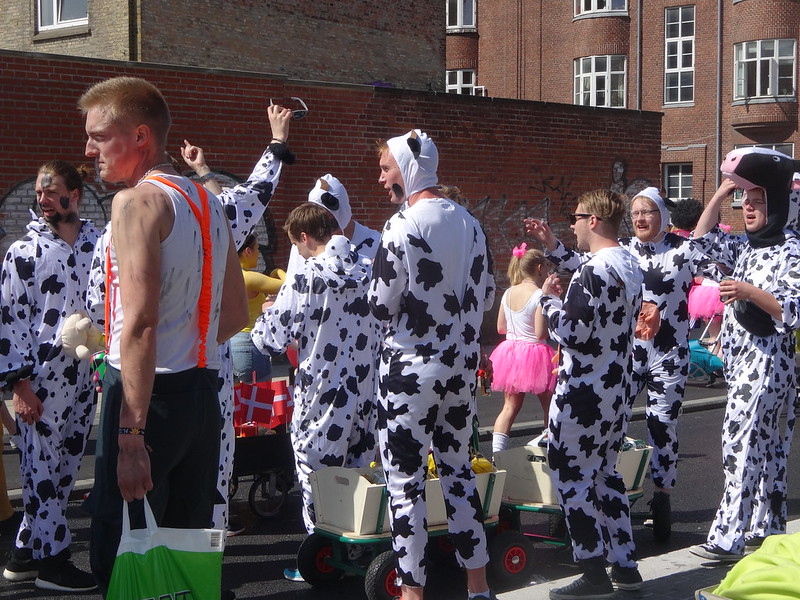 This herd of cows was certainly not drinking milk. 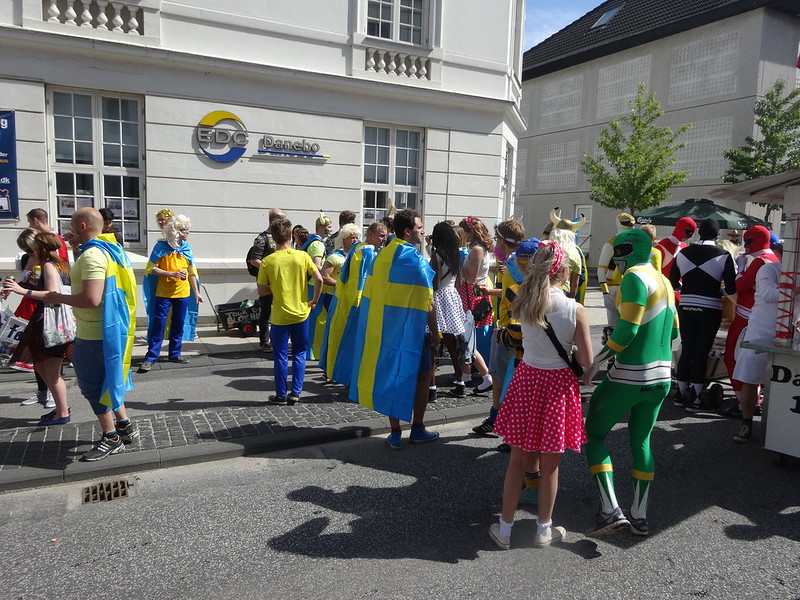 We saw a flock of Swedes who were secretly Danish. 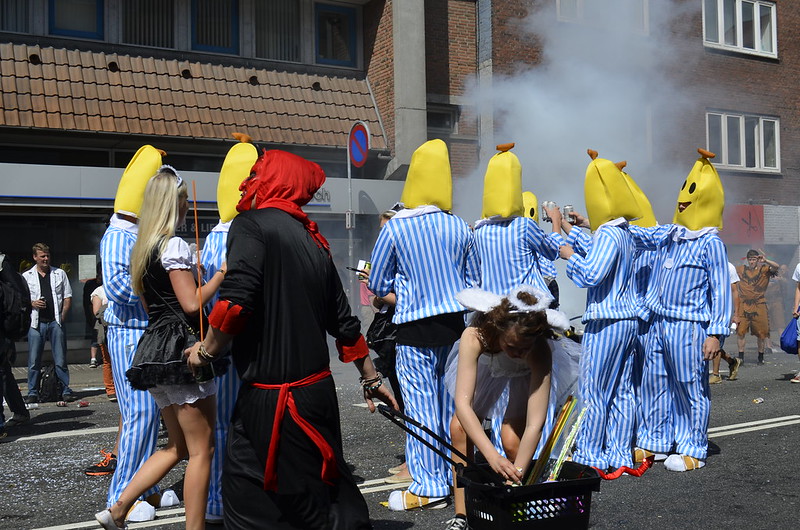 The juxtaposition of Bananas in Pajamas with the risque French maid and residents of Heaven and Hell summed up the colorful absurdity of the day. 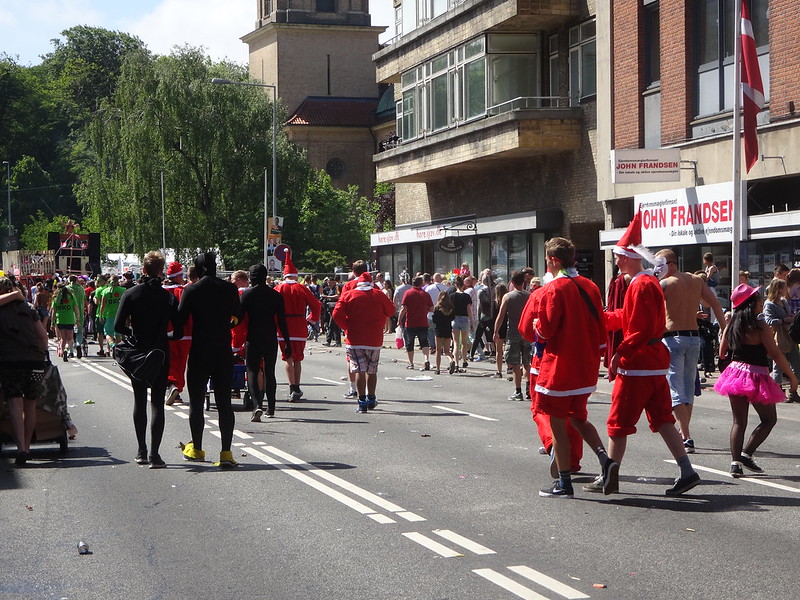 One thing that didn’t make any sense to me was the decision to wear a heavy Santa suit on a warm sunny day. 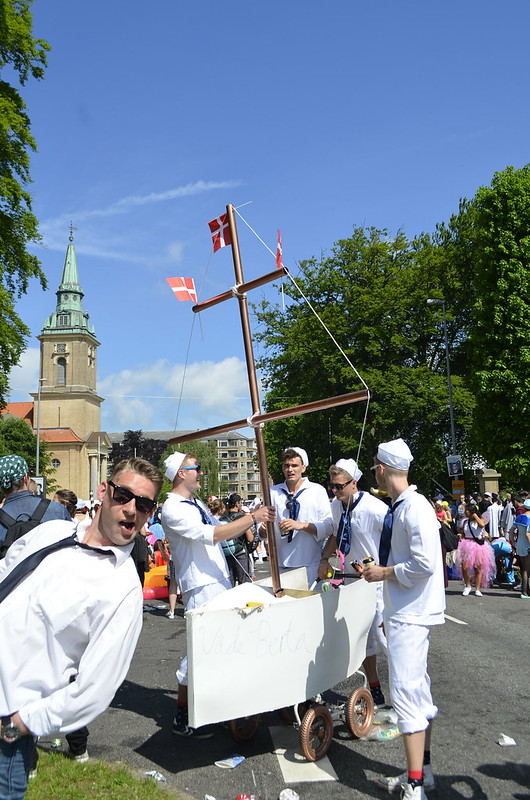 These sailors were a bit too drunk to navigate properly, and they may or may not have run into the photobomber dead ahead. 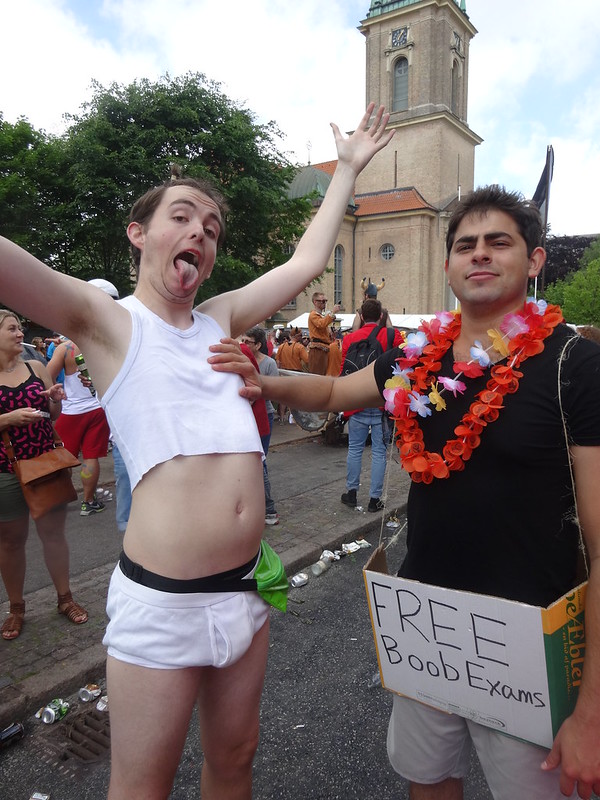 Even Miley Cyrus got in on the action (and of course asked me to fondle her breasts). 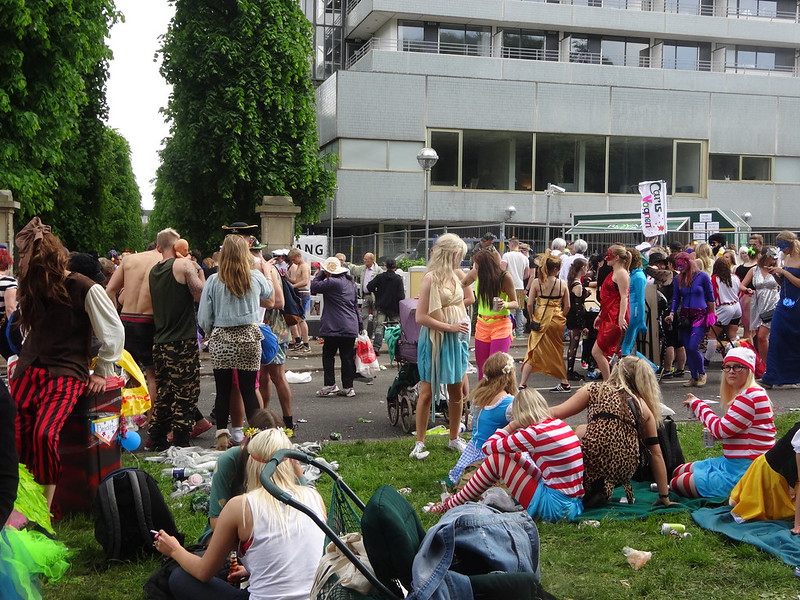 After several hours we reached the parade route spilled into a grand park on the other side of town. Everything was stagnant and yet kinetic at the same time. 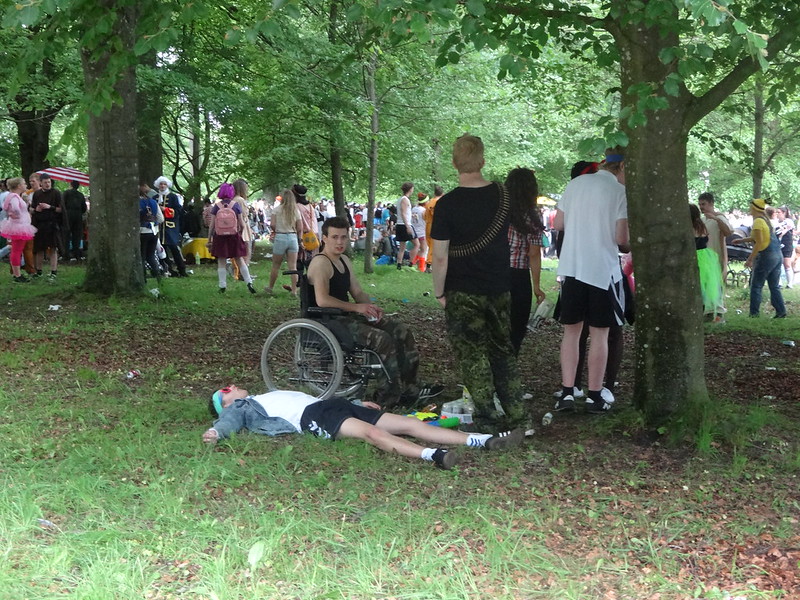 Except for the young man lying on the ground; there wasn’t a kinetic fiber in his body. 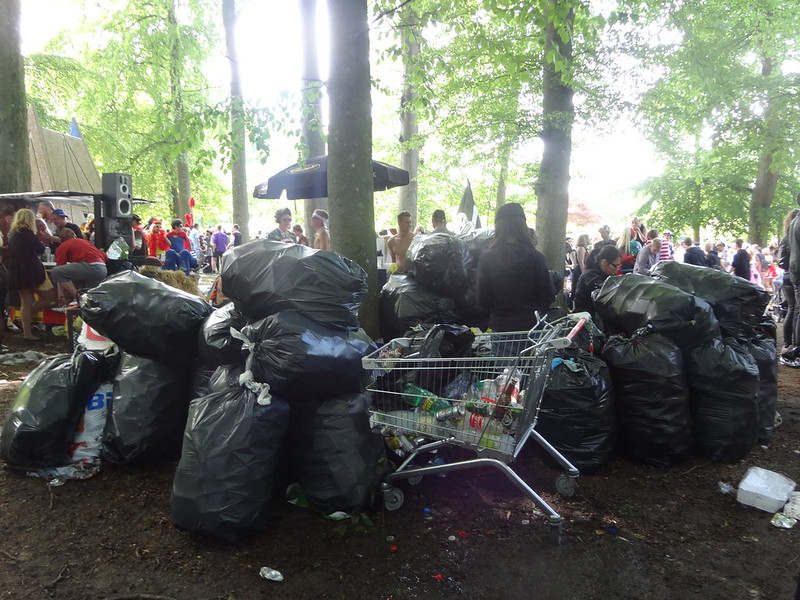 Like many states in the USA, Denmark offers cash back for recylcing, and an opportunistic family of Chinese people probably had a few thousand dollars’ worth of bottles and cans bagged up in the center of the park. 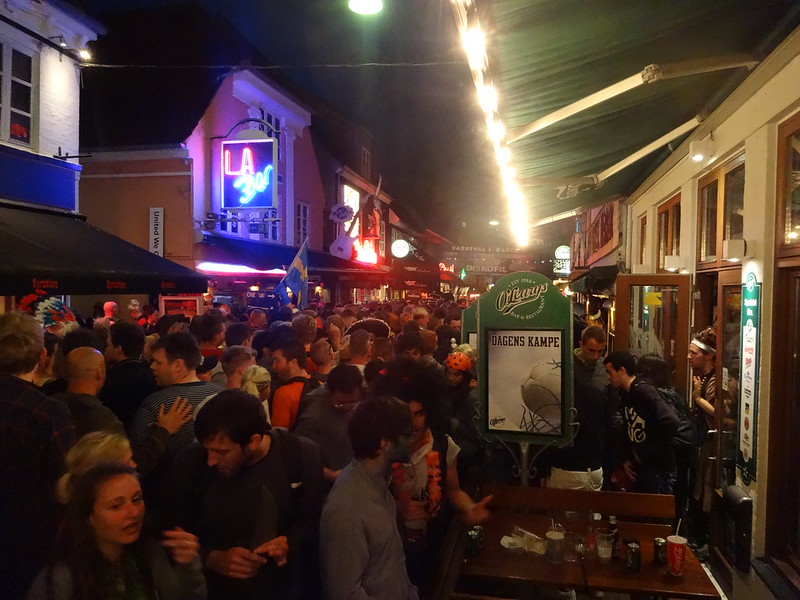 We departed the park for the comforts of home, but came back out to streets sticky with the sweet smell of spilled booze and caught the last hour of the Champions League final. Though most people clearly had no rooting interest, it did provide them with yet another excuse to drink–and if there’s anything I’ve learned from Carnival in Aalborg, it’s that the Danes will take any excuse to go wild. At least they’re good about getting their breasts checked.

If you couldn’t be here for the debauchery but want to know more about crazy happenings like the Aalborg Carnival, follow my blog! It’s free and awesome and filled with vitamins, nutrients, and voluptuously-clad women. OK, not really, but you’ll enjoy it anyways.

4 thoughts on “Many Breasts Squeezed, Many Beers Downed: Debauchery In Aalborg”