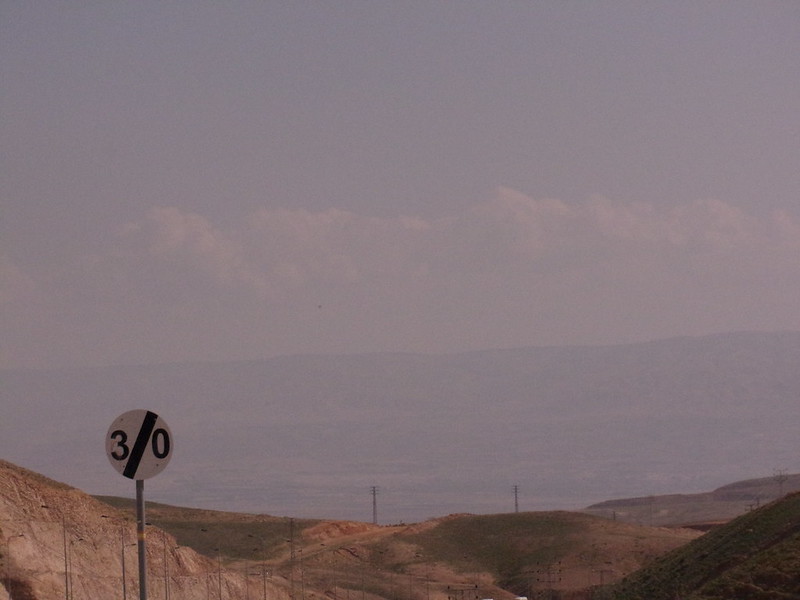 The first thing you notice about driving to the Dead Sea is that as you descend below sea level, your ears pop.

It’s a strange feeling–normally that only happens when you’re flying upwards in a plane, or descending back to sea level after a trip into the mountains.

My dad and I rented a car one Saturday in Tel Aviv and drove the few hours to the Dead Sea, with Masada as our final destination. There’s a monument set at the 0 mark , and with mountains behind me and a long road down, it underscores just how far below sea level the Dead Sea is. 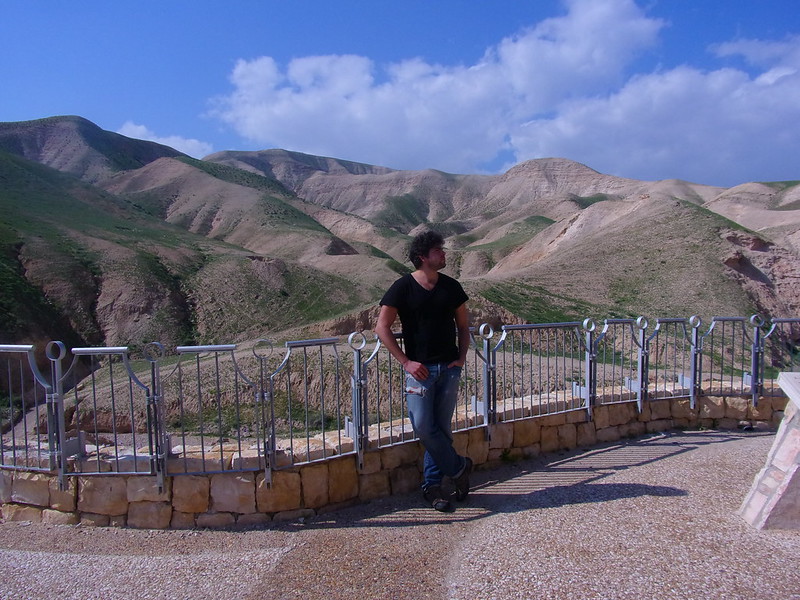 After what seemed like nothing but downhill driving we finally reached bottom and began driving south along the Dead Sea. I hadn’t expected it to look so startlingly blue. 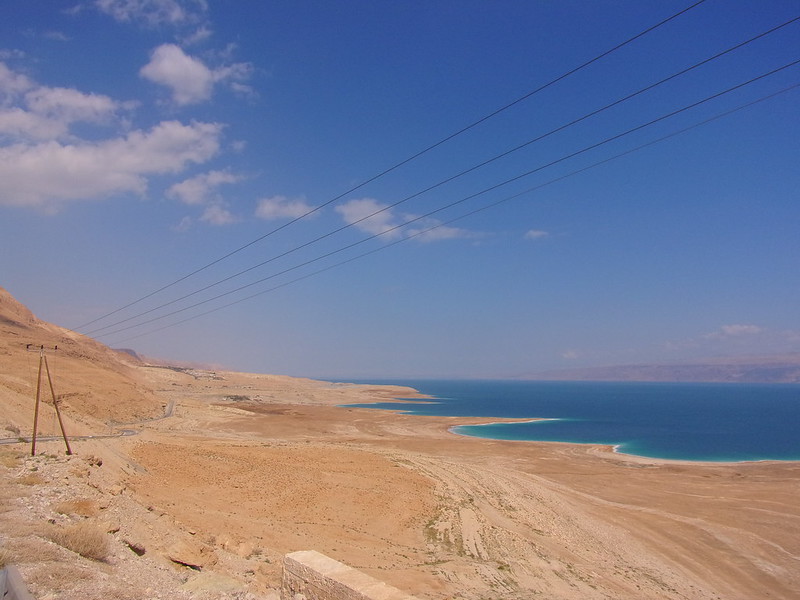 With the sun beating down on us when we arrived at Masada, there was no debate about how we were going up the mountain: we paid for a cable car ticket and enjoyed the view of the valley below. Several hardy tourists were doing it the old fashioned way, sweating their way up to the top. I hoped they remembered to bring water with them.

Masada has a place in Israeli/Zionist lore because of the last stand a hardcore group of Jewish rebels made against the Romans around 73 CE.

But before it became the site of a bloody siege that came to represent Jewish intransigence against outsider control, Masada was basically a Roman-style pleasure palace built by King Herod a little less than half a century before the year zero. I took this picture of my dad standing at the threshold of Herod’s palace on top of the mountain. 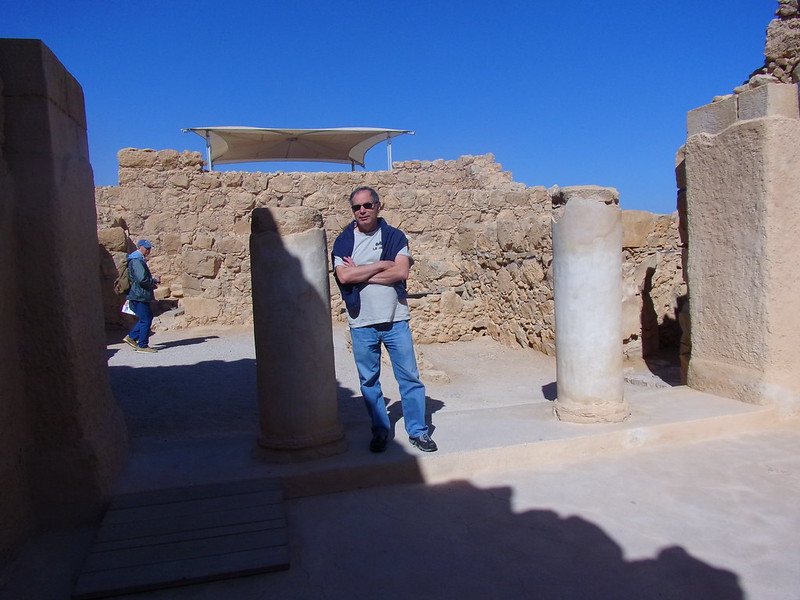 During peacetime, Masada was one helluva place to live. It had massive storage areas for grain, oil, and other necessities. There were heated Roman baths, sumptuously decorated rooms with killer views of the Dead Sea below, and water was ingeniously diverted across a canyon into several massive cisterns lining the lower part of Masada. As always with the Romans, I could only shake my head in admiration at their ingenuity. 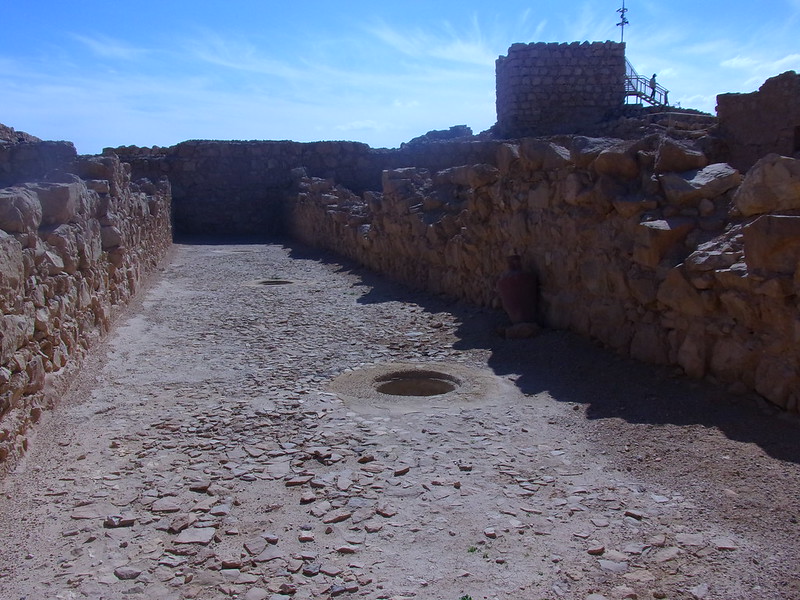 This was one of many huge cisterns capable of holding months’ worth of water and easily refilled by the canals snaking their way across the ravine. It’s no wonder that when the fortress was captured by Jews around the year 70 they were able to hold out for three years. 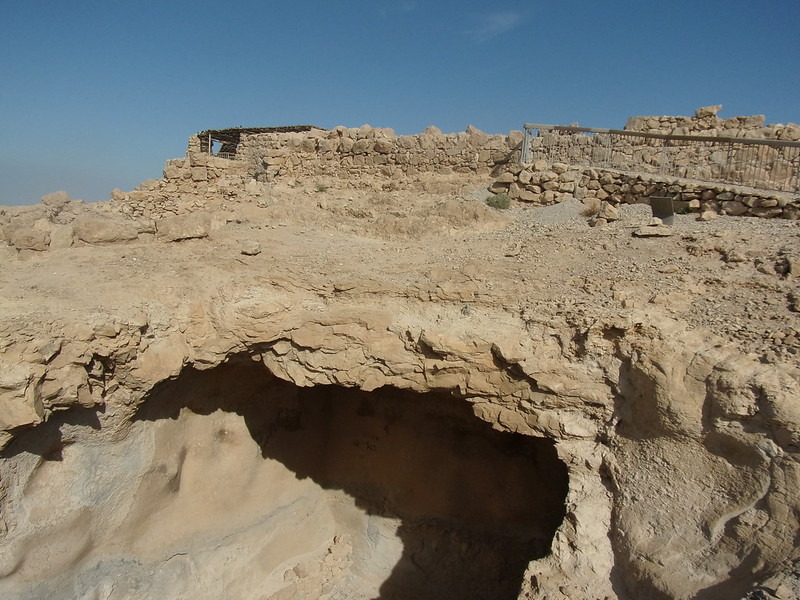 Probably my favorite innovation at Masada was this building, which housed numerous pigeons and doves for–you guessed it–delivering and receiving messages. 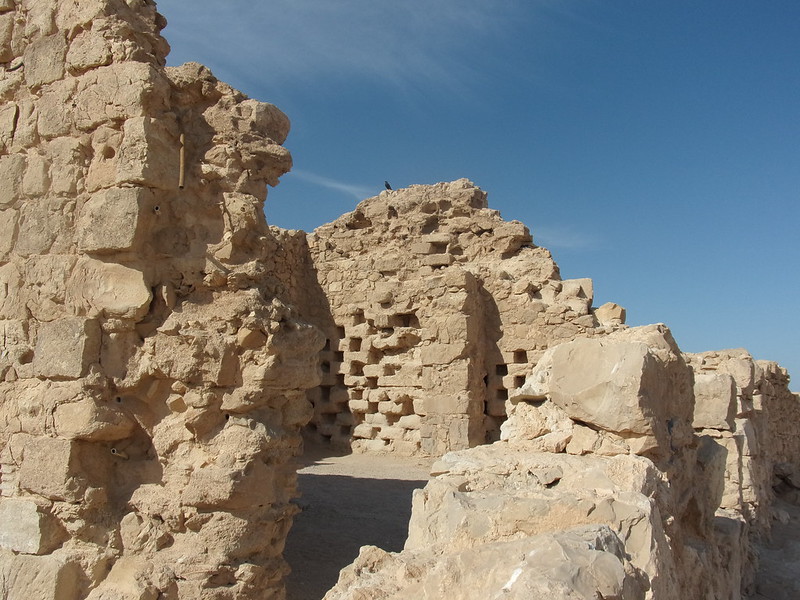 From this angle you can get a sense for how well Herod’s engineers designed the fortress. A modern set of stairs–not for those with vertigo–follows where the old ones hugged their way down the cliff-face. The two levels below the top were where Herod threw some of his most lavish and exclusive parties; you can see a semi-circular ring at midlevel and a clutch of columns at the bottom level. I remarked to my dad that after a particularly heavy night of drinking there must have been quite a few accidental deaths as people stumbled their way up the mountain in the dark. 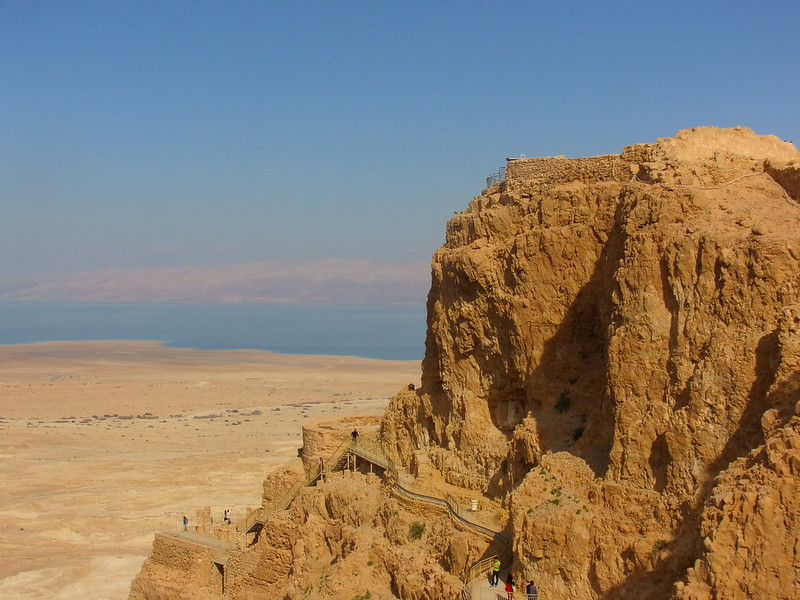 Once the Jewish revolt temporarily kicked the Romans out in the year 66, things must have looked pretty good for the revolutionaries at Masada. But of course, the Romans came storming back. By the year 70 they had wrested control of most of Israel. In the year 73 the X Legion built a massive siege ramp up the back side (the one facing west, away from the Dead Sea) of Masada and the night before the Romans breached the walls, Masada’s last desperate defenders committed mass suicide. 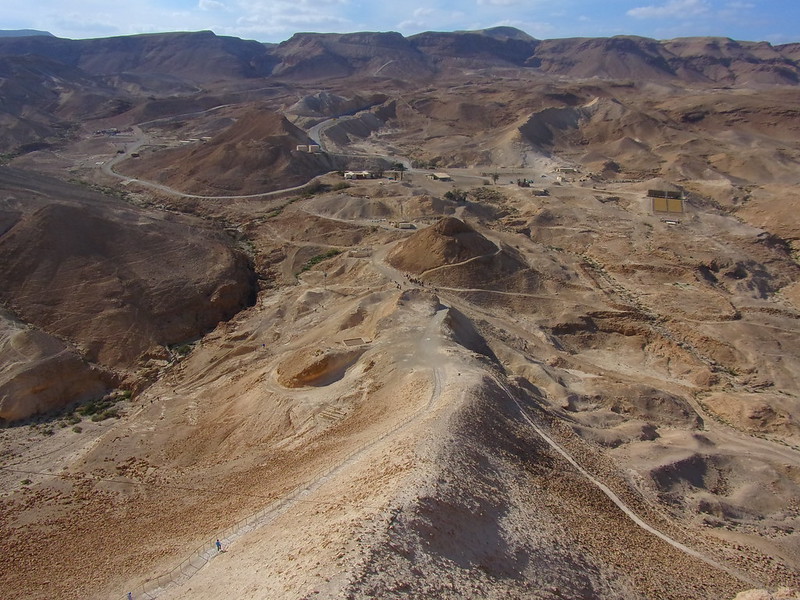 When I wrote that last sentence I gave pause to consider how to describe the people at Masada. Were they desperate? Certainly. It was no secret that if captured by the Romans the men would be executed or enslaved, and the women would face the same, plus the horror of rape. Yet I do think that Masada’s defenders were, for all their defiance against an imperialist army, fanatical. It’s part of a paradox about Judaism that I have been coming to terms with for the past few years. Were it not for the hard-liners of Masada, or the Jews who were willing to leave Spain instead of convert in 1492, or the many who endured pogroms in Eastern Europe, there probably would be no Jews today. It’s conceivable that the Israelites of 2,000 years ago could very well have gone the way of the Gauls of France, or the Iberians who lived in Spain: Romanized and assimilated, footnotes in history. The part of me that was raised on a romanticized diet of semi-mythological legends such as Masada takes pride in the fact that we have resisted the sword of change for thousands of years. The part of me that looks at the world today and sees an increasingly polarized and partisan political sphere–at home in the USA as well as Israel and its neighbors in the Middle East–wonders if clinging onto romantic ideals of nationhood will only lead to another Masada-like bloodbath in the future.

One thought on “The Dead Sea, Masada, And Some Thoughts About Fanaticism”