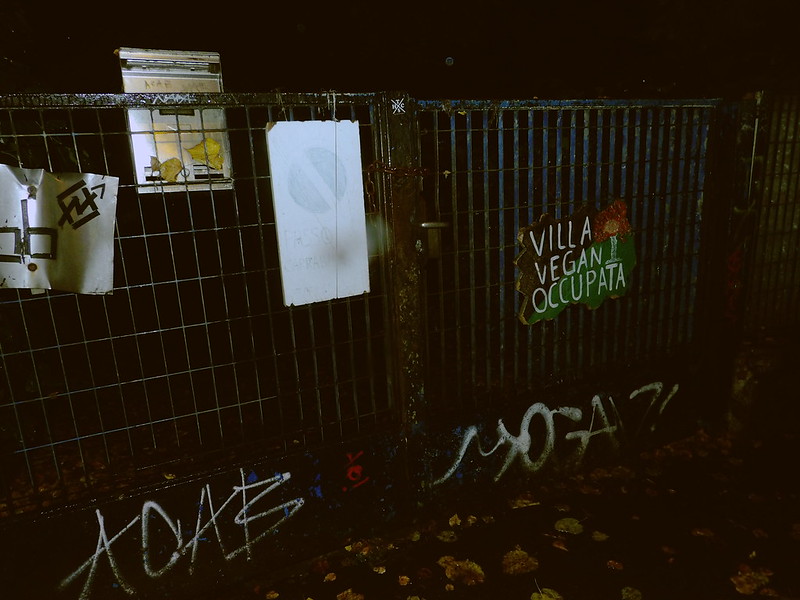 “We barricade the house every night before we go to sleep,” Alessandro said, shuttering the windows from the outside before sliding a steel gate across and padlocking it shut.

“Why?” I asked, knowing the answer almost as the words came out of my mouth.

“Police, bandits, vandals, whoever…” was his reply.

I left the perceived security of the main house and walked across the yard to the un-barricaded, un-shuttered, and slightly drafty guest house. This was the first of 2 nights I stayed at the Vegan Villa Squat in the semi-industrial northwestern section of Milan, and I didn’t sleep very well that night. 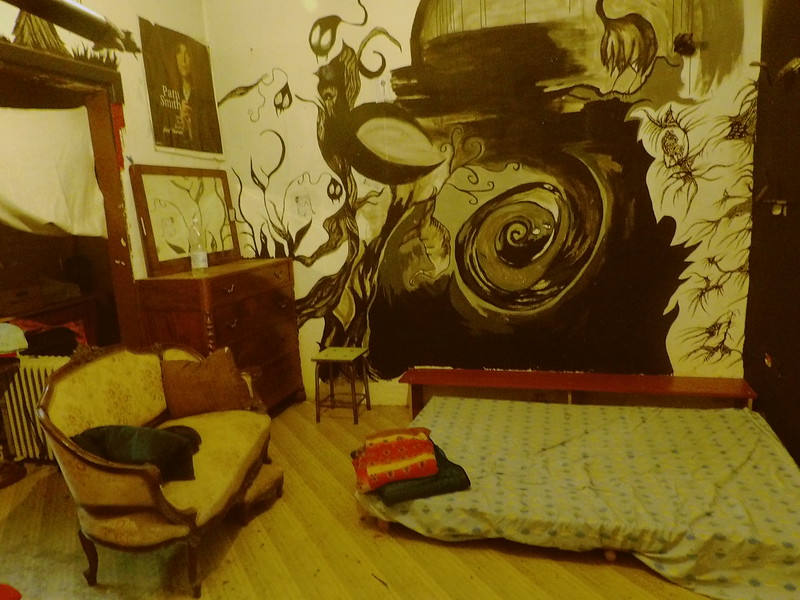 It had nothing to do with the slightly lumpy mattress I lay on, or the sound of trucks downshifting as they roared down the road and rattled the aging walls of the semi-reclaimed garage-cum-guest house.

For the first time in over a year of hitch-hiking countless times, finding myself homeless on numerous occasions, and running into strangers late at night, I felt genuinely vulnerable.

This wasn’t my first experience staying in a squat, either. Almost a year ago Lizzie and I spent our last night in Paris with some squatters in a converted pharmaceutical lab in the southern outskirts of Paris. We felt safe, but more importantly, welcomed by a colorful bunch of people best described not as anarchists, but simply anti-capitalists. 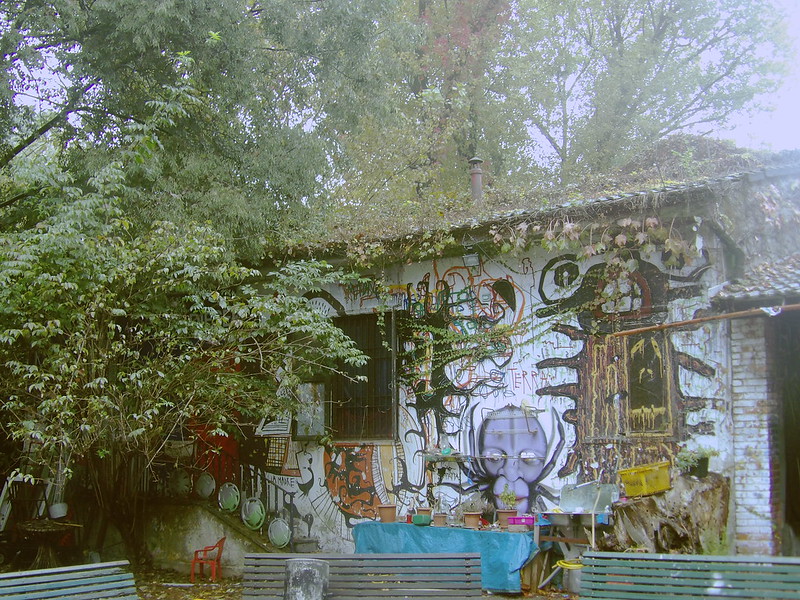 They were certainly against the cycle of materialism, consumerism, and the 9-5 work week, but they were happy living outside the system without trying to destroy it.

In Milan, the inhabitants of Vegan Villa went a bit beyond my comfort zone. To their credit, they obviously had no obligation to host me, but did it out of kindness.

I found them on this travelers’ forum and made contact the last time I was in Milan, 6 months ago and on the same day a massive anti-fascist protest took place.

The people at VV Squat took themselves very seriously. When I arrived they were planning a rally in support of one of their colleagues who was currently incarcerated for some form of violent dissent or another.

While I’m all for saving the environment (veganism is one way to do that), rescuing animals–they had over a dozen chickens destined for slaughter that now roamed the yard–spending less money on stupid things you don’t need, enjoying life more and working less (unless you truly love what you do), I think that society is long past the point where capitalism will ever be replaced.

Perhaps if this was Barcelona in 1936 and I found myself in George Orwell’s shoes–an outsider walking into the midst of a bona fide people’s revolution–I would be more inclined to go along with the anarchists, or hell, even take up arms with them and fight fascism (and in their eyes, capitalism, which are one and the same). 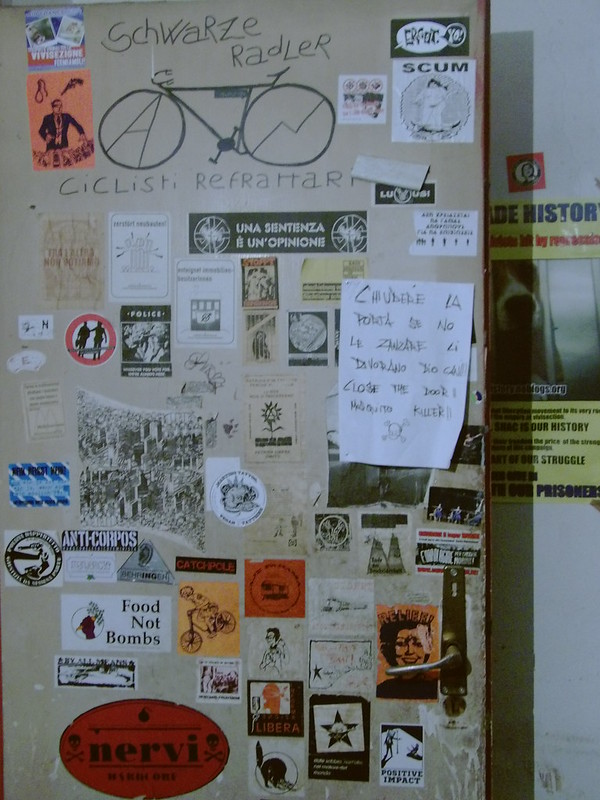 But the time for revolution is long gone. We live in a post-1984 world: Our governments watch us closely. Big companies sell us an endless array of shiny gadgets that don’t make us any happier. We eat processed food that is empty of nutritional value. Anti-depressants keep us on an even keel and shift us away from the natural highs and lows of living. Our short attention spans can hardly cope with the advertisements which bombard us, and when we do need to focus, they have pills to help do what once came naturally.

The people at Vegan Villa Squat want to change all this, when they might have better luck tunneling through a mountain with their bare hands. It’s one thing to step away from the system, but it’s another thing to risk everything over a war that was already fought and lost decades ago. As this brilliant anarchist comic ‘zine puts it, anarchists either sellout, go to jail, die, or turn crazy. But win? Nah. 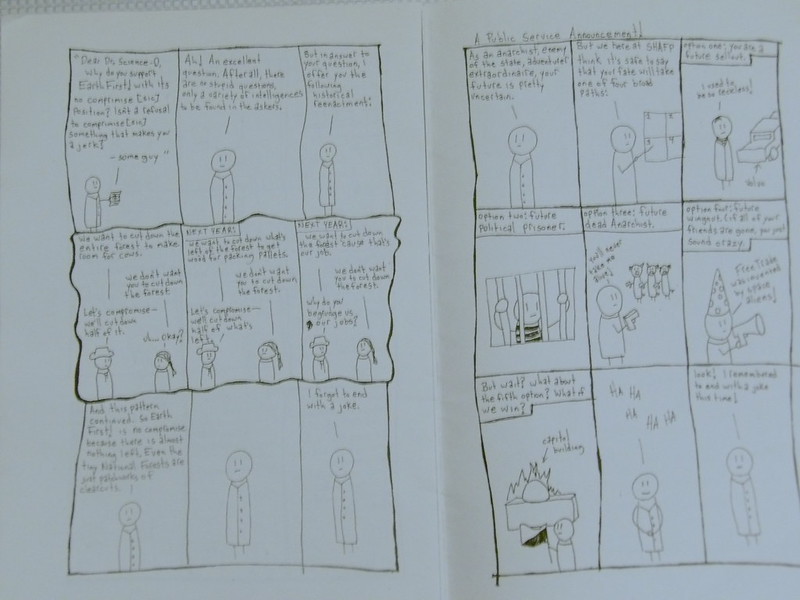 Does this mean I’m a complete sellout? No. For as long as I live, I want to pick up hitch hikers after being one myself. Once I stop traveling I can’t wait to host couchsurfers. Depending on where I live, I hope I can grow at least some of my own food and herbs or rely on locally raised products. There will probably never be an anarchist revolution, but that doesn’t mean we can’t make the world a better place.

7 thoughts on “I’m Not Cut Out For This Shit: My Brief Stay With Milanese Anarchists”