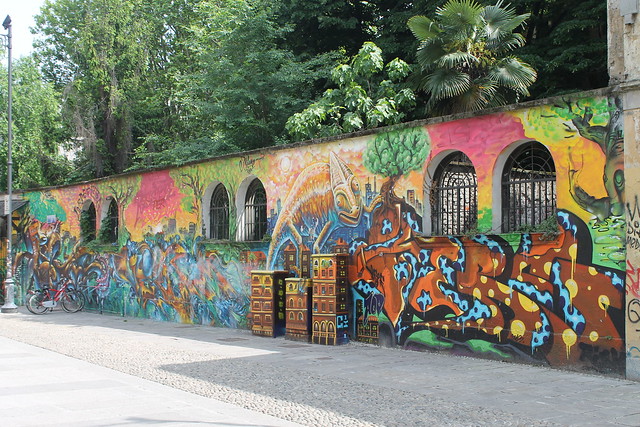 When you think of Milan, fashion shows, finance, and one of their two famous football teams usually springs to mind. 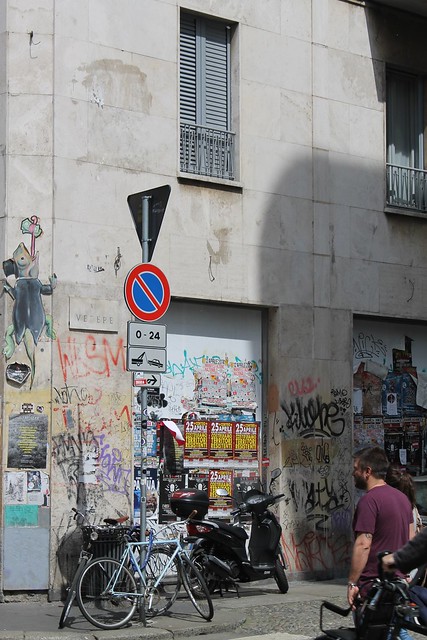 But protests against the evils of fascism and capitalism? Not so much. 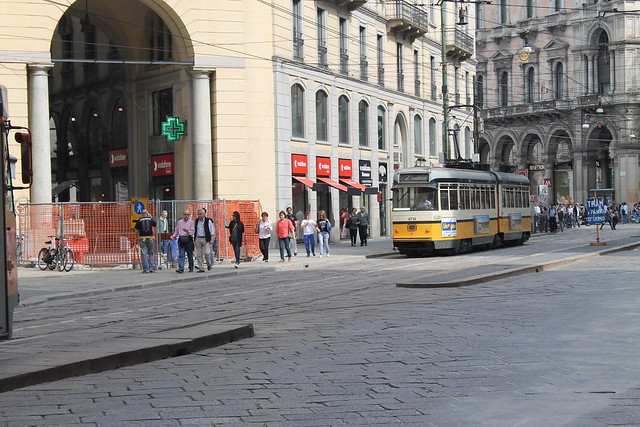 I spent a few days in the city visiting an old university chum and slowly warming to the concrete jungle that surrounded me. 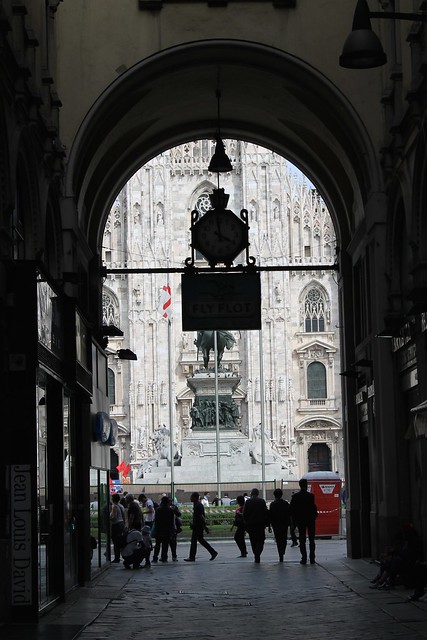 On my last day in Milan I decided to pay a short visit to the Duomo, one of the largest cathedrals in the world and something of a wedding cake with all of its sculpture-bedecked spires. 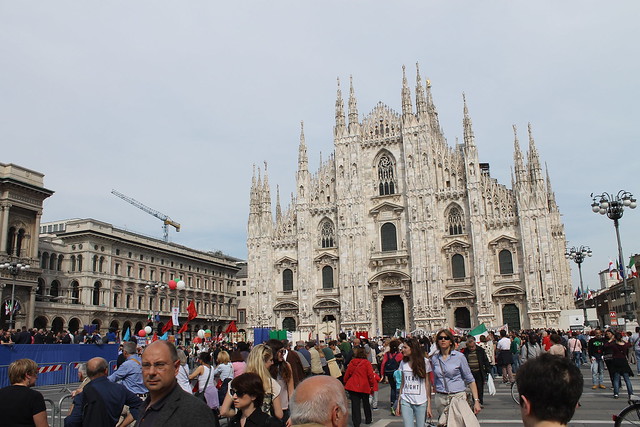 As expected, the Duomo was spectacular and the only thing missing was a layer of icing with pastel-colored sugar flowers pasted on the sides. What I didn’t see coming was the swarm of humanity occupying the center of the grand piazza in front of the cathedral. 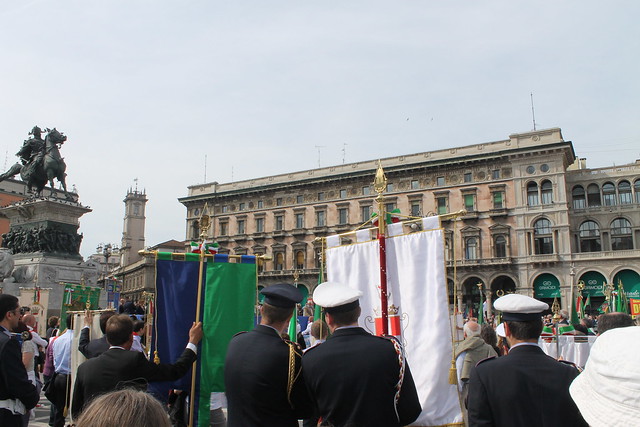 In the very center of the square stood a legion of men and women dressed in full military regalia; at first I was confused as to allegiance of these people but after questioning my fellow onlookers I was told that they were part of an organization called the ANPI and represented the partisan brigades which resisted Mussolini’s fascist horde. 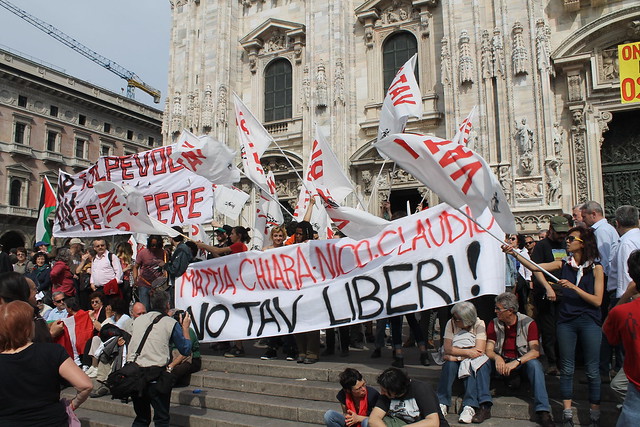 It seemed like the only truly organized event of the demonstration was limited to that small gathering in the center, where a few men and women spoke in uplifting tones about freedom, the beloved homeland, etc. The vast majority of the tens of thousands of people in the square seemed to be perfectly content to wave their own flags, sing their own songs, and shout their own speeches. 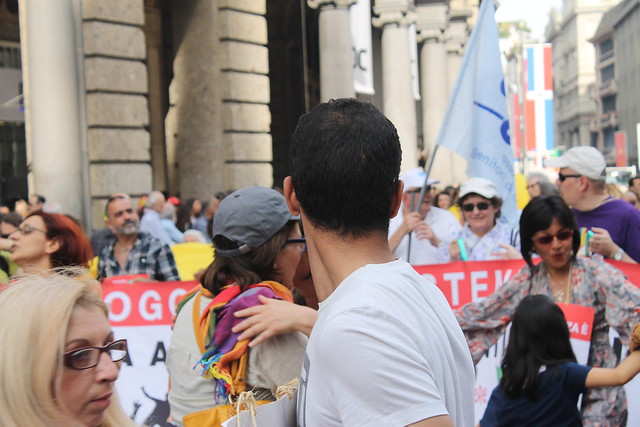 Although it seemed like the square was already full of people, thousands more marchers slowly went up a street by the side of the Duomo and joined the multitude. 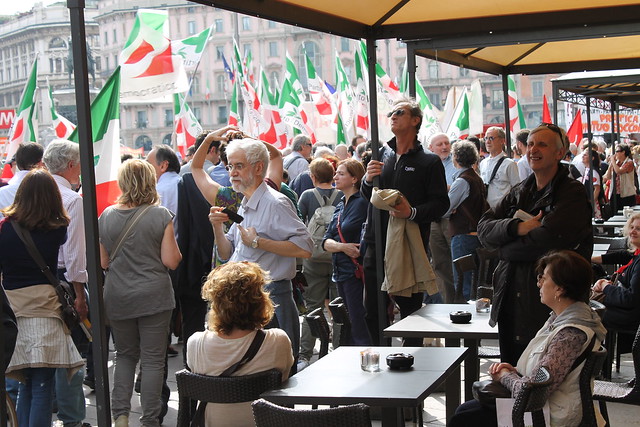 On the way by they passed numerous cafes, and I imagine some of the tourists sipping their espressos were a bit surprised (or thrilled) at the protest unfolding before them. 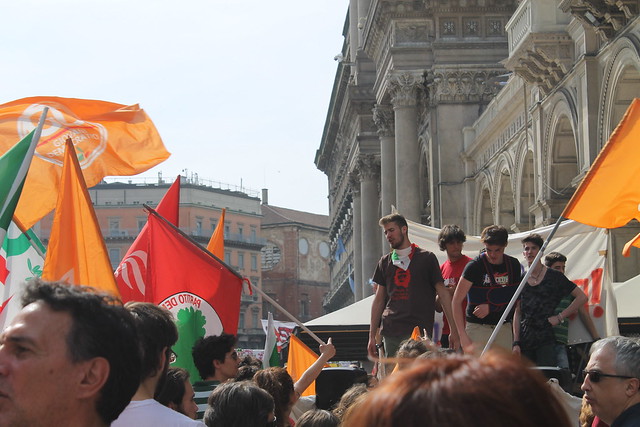 Flags of just about every color were waved–indicative of the partisan nature of Italian politics but also of their tasteful knack for color coordination. 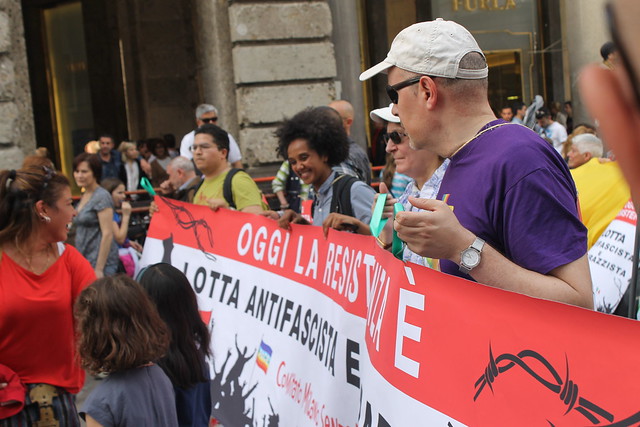 They sang anthems, shouted slogans, and hurled epithets against fascism into the sun-drenched spring air, made stifling by the mass of people cramming into it. 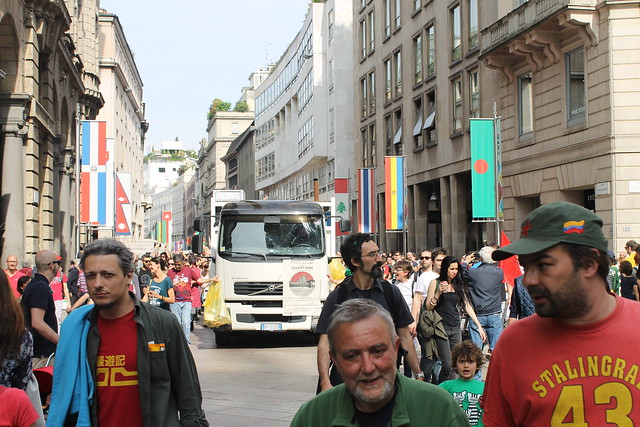 Every hundred feet or so a truck or van would creep at turtle-like speed along the ground, blasting dance music in every direction and lending a festive tone to the atmosphere. 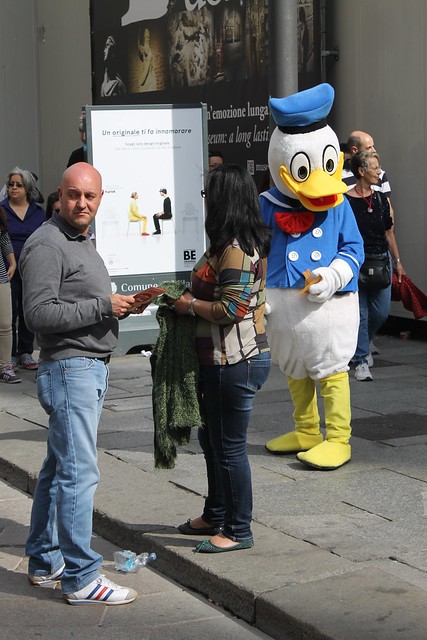 There was a small streak of absurdity about the protest, best epitomized by the chap walking around in a Donald Duck costume. I’m not sure if Donald Duck is such a heroic symbol of anti-fascist sentiment, but the tourists in the vicinity may have thought differently. 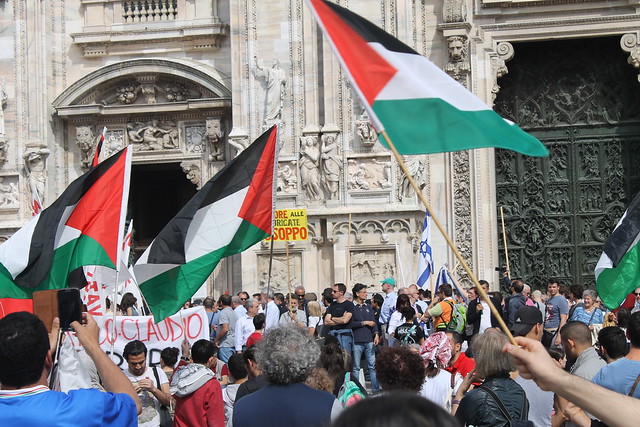 Perhaps because this was Italy and people here jump at the excuse to protest anything and everything, there was a large contingent of Palestinian flags and a decidedly smaller one of Israeli flags. The two groups seemed to be doing a lot of passive-aggressive waving at each other but not much else. 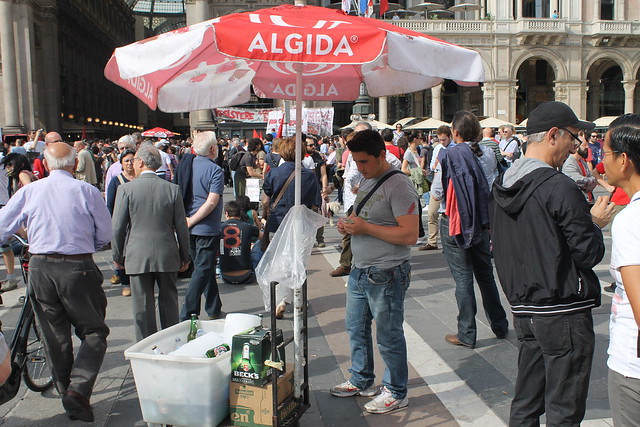 One opportunist seized on the cloudless sky and parched protesters to sell bottles of cheap beer; when the world burns there is always someone looking to make a buck or two. 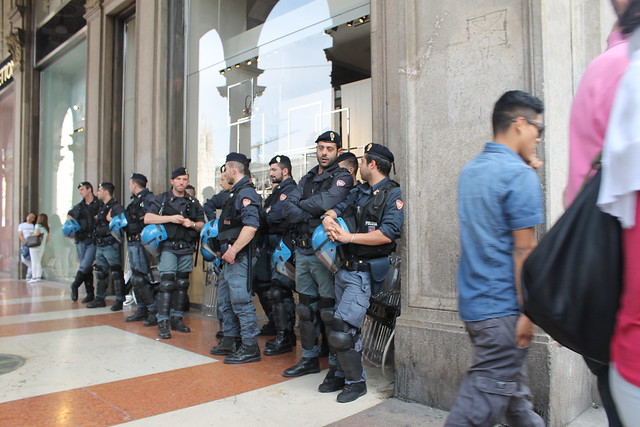 Probably owing in part to the heavy cloud of marijuana smoke that enveloped the marchers, the closest thing to violent police involvement came when I noticed one of the Carabinieri discreetly using his smartphone to play Angry Birds. 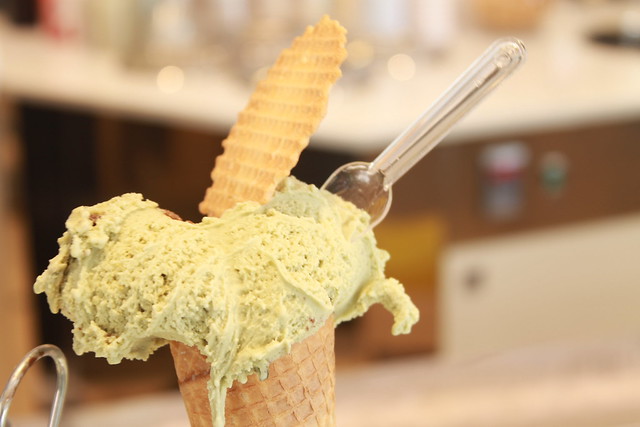 Satisfied that the Milanese are as firmly opposed to fascism as they are in favor of peaceful protest, I purchased a pistachio brownie gelato and ate it as I walked home.

If you’re interested in learning more about anti-fascist movements around Europe I can’t really promise you extended coverage, but if you find yourself in that awkward position of wanting to travel and not being able to for whatever reason, you should probably follow my blog. It’s free, and I don’t believe in spam–click on the “Follow!” button up there on the right for updates on my travels (or indirect participation in protests) and inspiration for the next time you go somewhere new!

2 thoughts on “No Fascists Allowed In Milan!”