It was an overcast Sunday afternoon in Stockholm and I was walking through Gamla Stan, a small island lined with cobblestoned streets and touristy pubs. As I neared one of these pubs I heard the unmistakable sound of drunken men singing without reproach.

I don’t know anything about Swedish football, but I was bored and looking for an interesting way to spend the rest of the day. So when the crowd of about 500 boarded a caravan of public buses to take them to the match, I joined them.

As we packed onto the bus like sardines, I realized I had no idea which club these supporters followed. They were wearing scarves with white and baby blue stripes, with Malmo FF imprinted on them. I vaguely recalled hearing not long before that Malmo were the reigning Swedish champions, and that they had just beaten Greek giants Olympiakos in the Champions League.

It took us half an hour to reach Friends Arena, the stadium where AIK Solna, a relatively successful Stockholm team, would be hosting Malmo FF. The entire duration of the bus ride was a non-stop succession of chanting, banging on windows to get the attention of passersby, and general delirium.

A general rule when it comes to football is that away supporters usually represent a more hardcore faction than the average fan. With the exception of Malmo transplants living in Stockholm, the overwhelmingly male contingent of Malmo supporters making the long trip up could best be described as ultras.

When we arrived at the stadium a sizeable cordon of riot police, some of them mounted, funneled us up a staircase and to the ticket gates. Every single supporter received a full pat-down. After four more flights of stairs we emerged into a corridor reserved exclusively for away supporters. A stream of humanity poured through several doors leading to our upper-deck seats.

Although the match was still about 30 minutes away from starting, the roar of noise that flooded my ears was comparable to a bomb going off. That’s when I realized that there were actual explosions happening all around me, mostly flares but a firecracker or two.

As the kickoff neared and the stadium filled up, the AIK ultras unfurled a massive banner that covered the entire north section of the arena. On our side, yet more flares were lit, and the Malmo section puffed its collective chest out through a sea of red flames and smoke. The match started slowly and the quality wasn’t what I would call world-class, but Malmo did score a goal in the first half, making it 1-0 at the break.

During halftime I started talking with my neighbor, a Malmo transplant named Holgar now living in Stockholm. From him I learned that if Malmo won the match today they would win the Swedish title for the second consecutive year. He pointed out the obvious: it was incredibly good timing that I was here.

In the second half play opened up a bit more, and after Malmo scored a second goal pushed up the field in search of two equalizing goals. Remarkably, they tied things up in the 85th minute courtesy of a mediocre free kick which the Malmo keeper flailed at (this summed up the lackluster level of play).

With a comeback in the works, the AIK ultras across from us lit up more flares, and the 20,000+ home supporters finally found their voice. But champions are made of stern stuff, and only a minute passed before Malmo’s captain calmly slotted home a third goal to shut them all up.

While the goal turned off the noise in the rest of the stadium, it set off an explosive wave of celebrations in the stands. Grown men hugged each other and leaped up and down like little girls, more flares were lit, scarves were twirled, flags were waved, and songs belted out in triumph.

When the final whistle blew, we waited for the rest of the stadium to empty out so that we could exit. This was when I noticed a large group of black-clad AIK ultras coming towards us. Holgar leaned over to me and explained that AIK’s ultras have strong fascist tendencies, and I noticed that many of them wore ski masks over their faces.

Strangely, there didn’t seem to be much of a police presence around; were it not for a large net separating us from the rest of the stadium, things definitely could’ve gotten ugly. Still, this didn’t stop an idiot fringe within the Malmo support from ripping off the backs of seat chairs and tossing them towards the AIK ultras below. To the credit of the majority, many people were visibly rebuking those who were behaving like idiots—some things don’t require translation.

While it could have been worse, this incident was more memorable to me than the game itself. For the first time since I began traveling around Europe I saw with my own eyes the (masked) face of the far-right that has won ever-increasing support across the continent despite—or because of—anti-Semitic, Islamophobic, racist, and homophobic platforms. I wonder what future these neo-Nazis have, and how their rise to prominence can be averted before they become anything more than a handful of thugs confined to spewing hatred at football matches.

Brief highlights of the match:

Pyrotechnics before the match began: 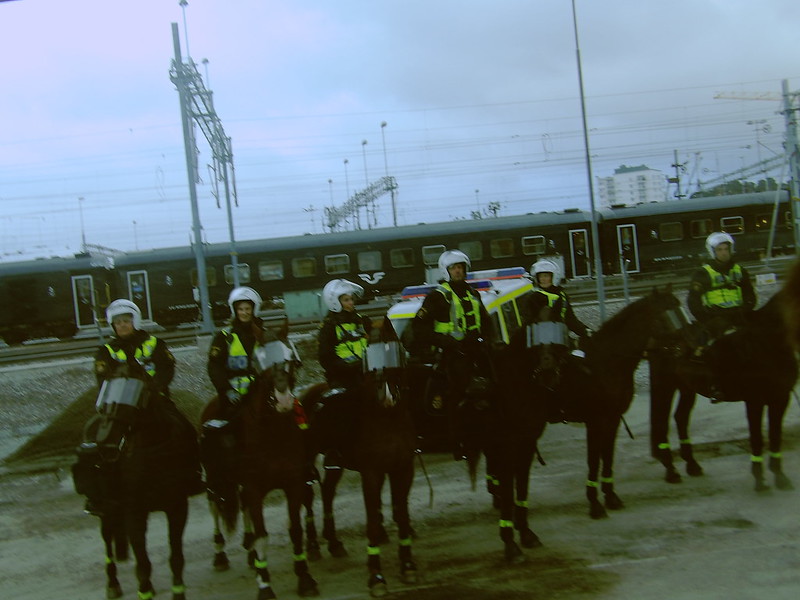 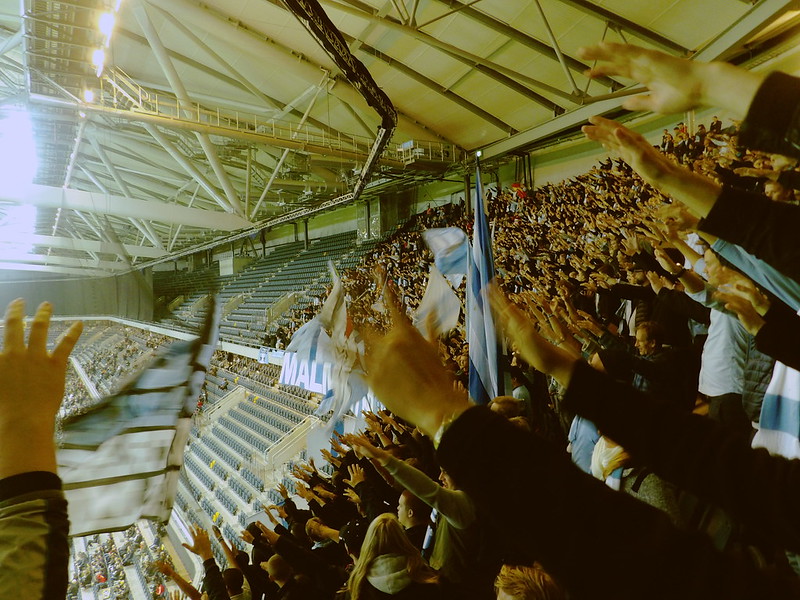 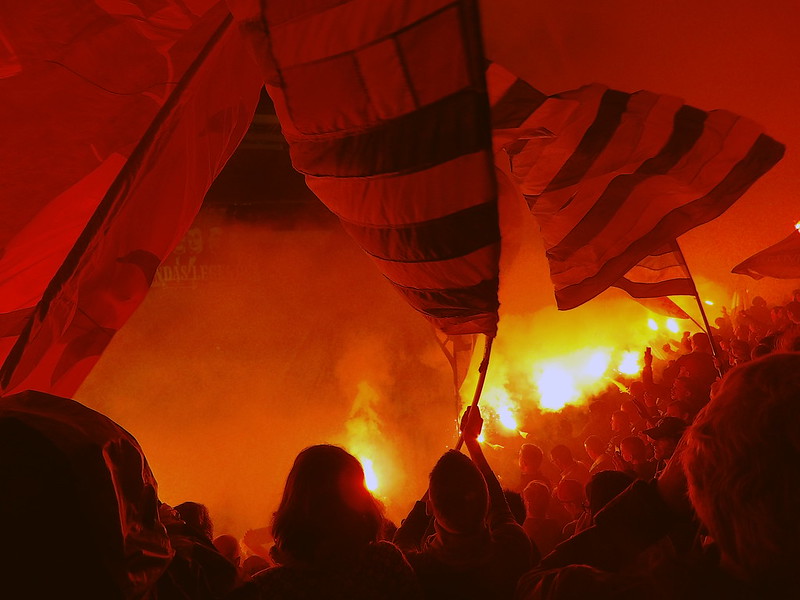 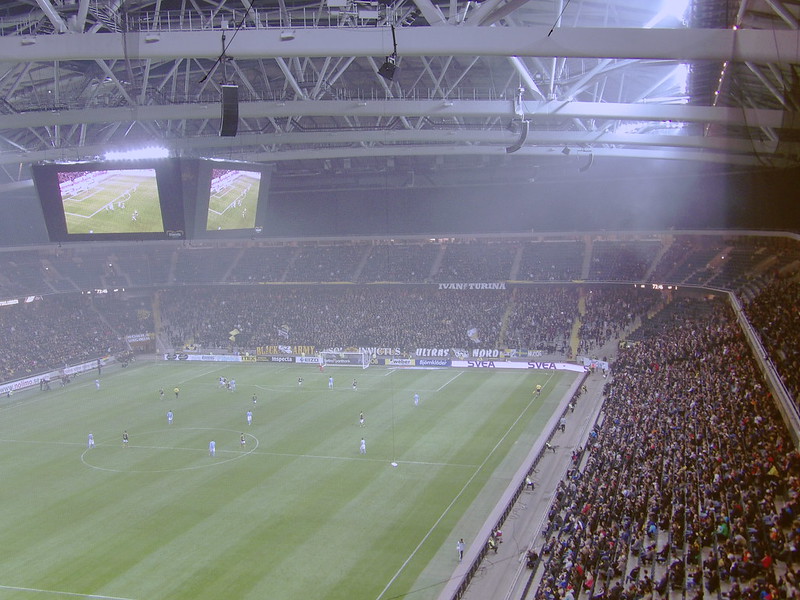 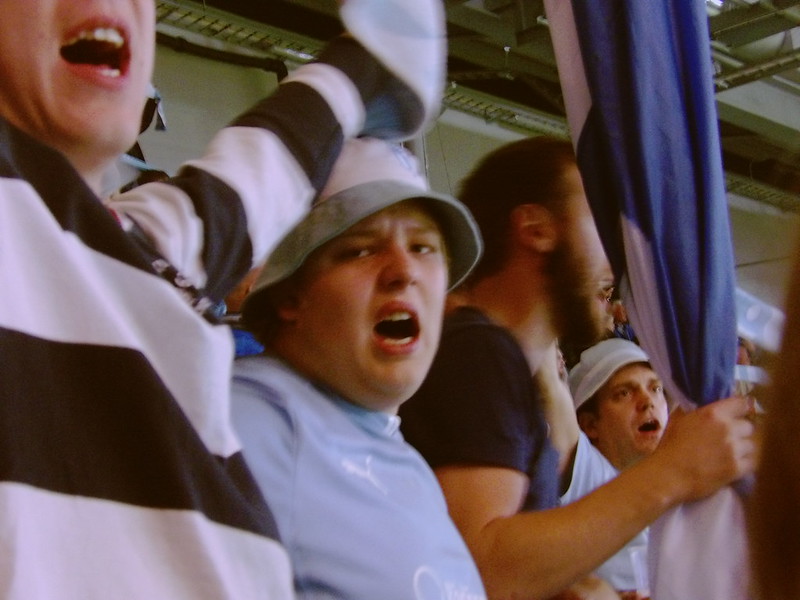 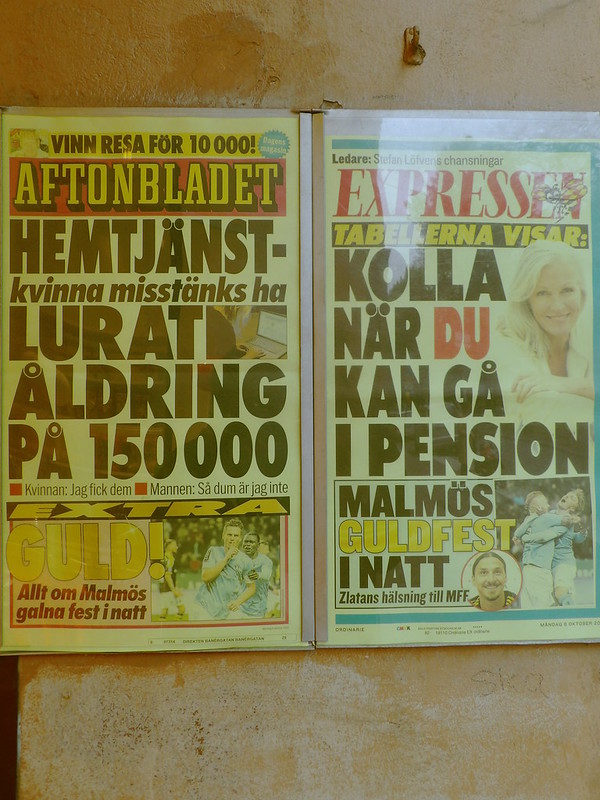 3 thoughts on “Stumbling Into Neo-Nazis (Oh, And There Was A Football Match Too)”