First of all, let me say that this isn’t a paid or sponsored post.

This is about preaching the gospel of perfect pintxos; of shouting from the rooftops, “this is the place!” and guiding other souls to culinary salvation. San Sebastian, or Donostia in Basque, is home to some of the best cuisine in the world, but one place rises above them all: Borda Berri, an unassuming bar set along an ordinary street in San Sebastian’s old city. What is so beautiful about Borda Berri is that despite serving Michelin-worthy cuisine, its prices are as humble as its scrubbed wooden bar and the guys wearing simple black t-shirts who pour your wine and serve you plate after plate of delicious pintxos.

My cousin Salo and I spent five days in San Sebastian and went to Borda Berri just about every night for dinner; mind you, coming from someone who tried to do Madrid on 10 Euros per day, this was no minor expenditure. For between 12 and 15 Euros you can have 4 pintxos and a cup or two of house wine–basically nothing for the experience of world-class dining. Alright, I’m going to shut up and let the pictures do (most) of the talking. 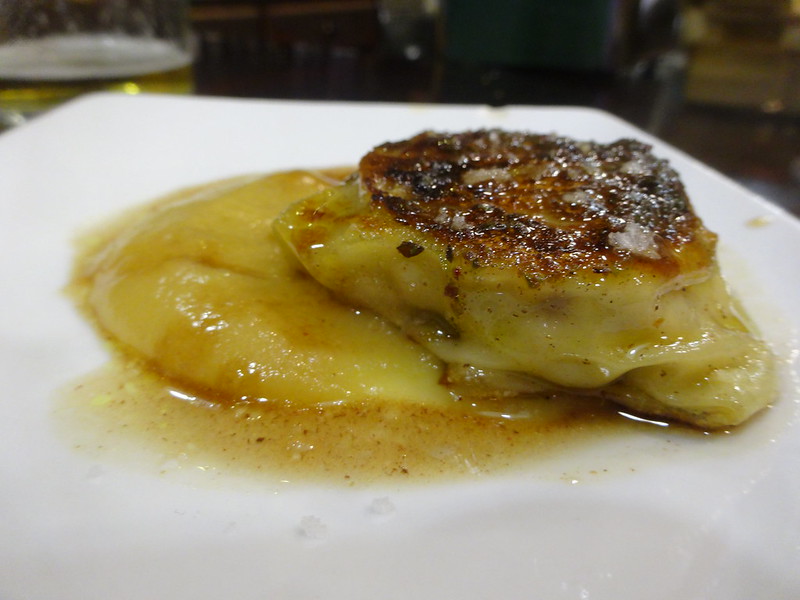 This salty and wondrously rich dumpling was packed with duck meat and served with a side of applesauce. 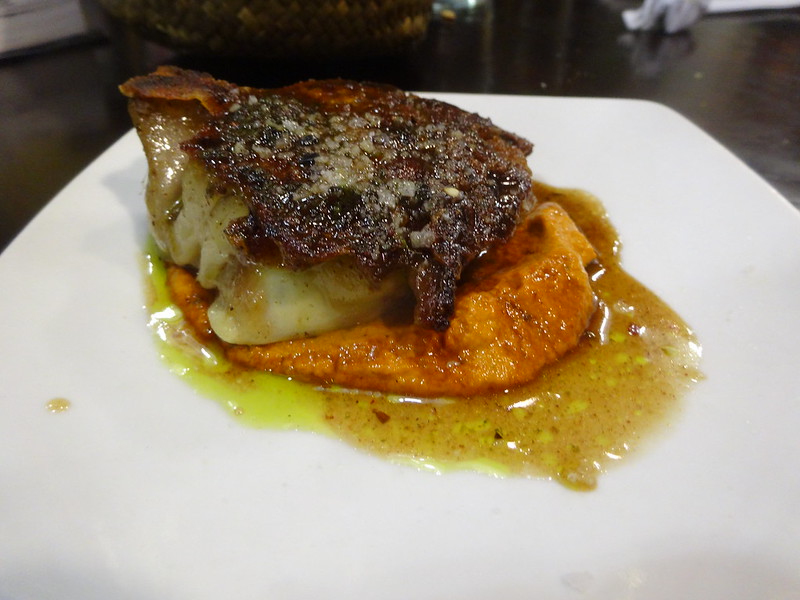 Crispy on the outside, a bit too much cartilage everywhere else, the pig’s ear is worth a go merely for the sake of trying the piquant roasted red pepper sauce that came with it. I will be honest and say that it was the first and last time I try pig’s ear–but if you haven’t tried it yet, this is the place to do it. 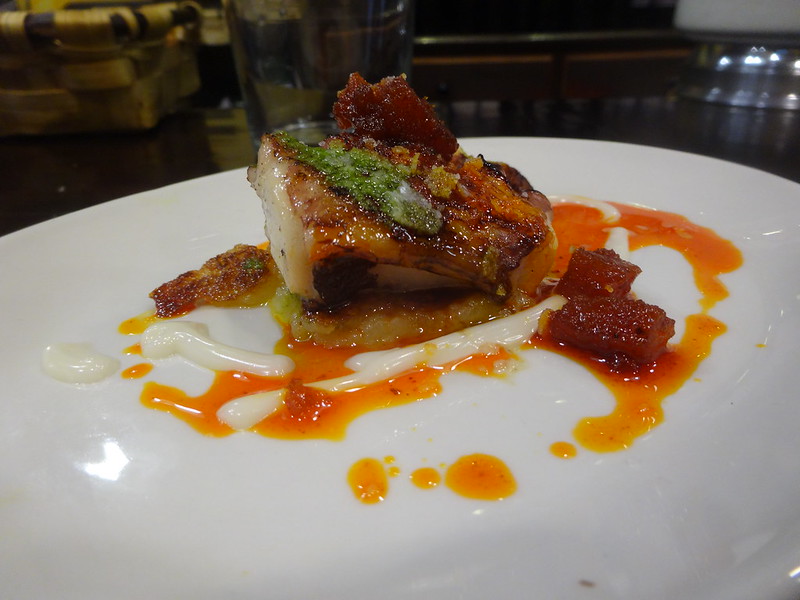 The grilled octopus is gorgeous–there is a slightly spicy paprika sauce to offset the jewel-like morsels of quince paste which crown the meaty hunk of octopus. A smooth garlic aioli rounds it all out. Probably my favorite dish after the veal cheeks (which unfortunately never turned out well in front of the camera, for some reason 😦 ) 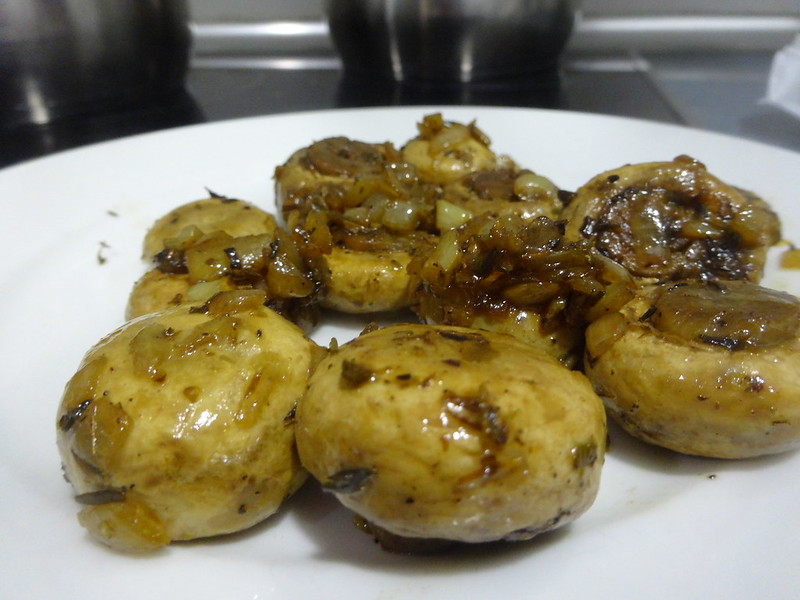 Marinated in white wine, garlic, and thyme, the mushrooms here were actually made by yours truly, but maybe you were fooled for just a second. I promise they’re restaurant quality–but not quite good enough for Borda Berri! 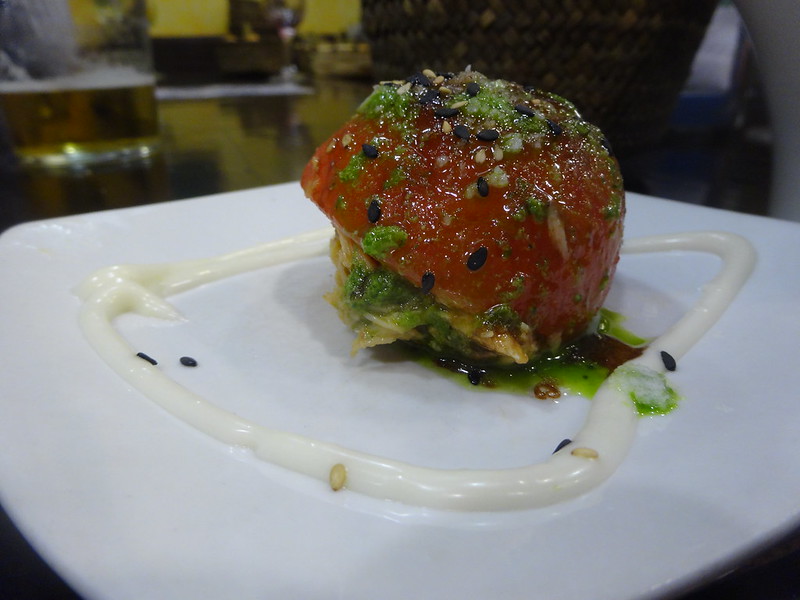 A very interesting plate was the tomato “sirloin” stuffed with salty bonito and garnished with chimichurri and aioli. As far as the level of quality went, this was great but not my favorite. 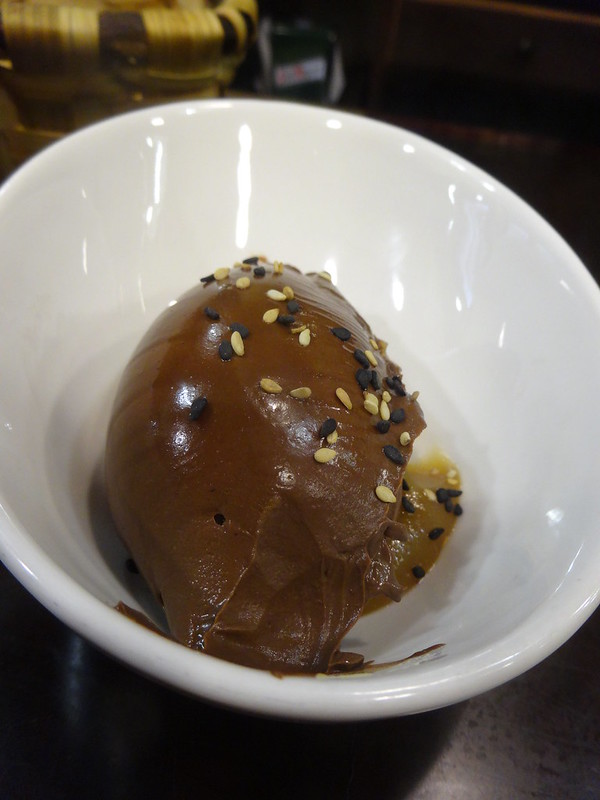 Because no world-class meal is complete without dessert, Borda Berri offers a chocolate ganache with a Cointreau and applesauce emulsion. It lives up to everything else on offer. 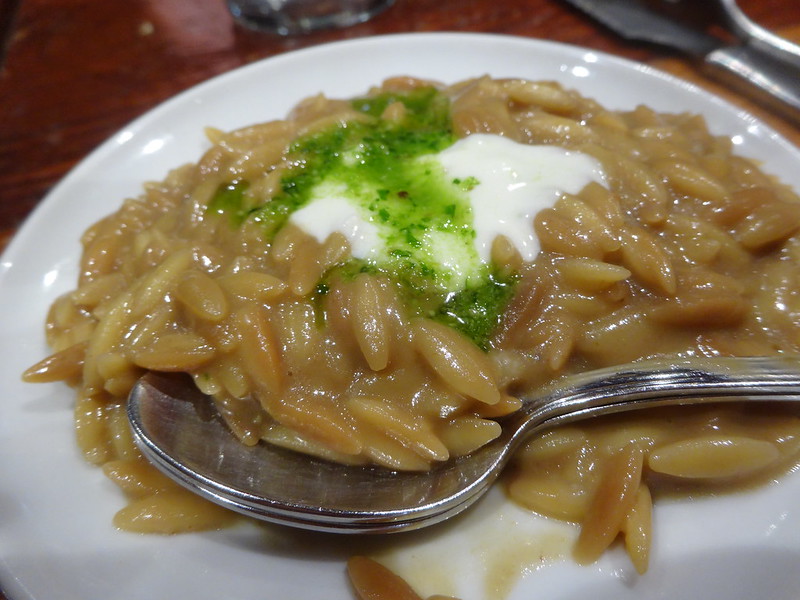 Before you go thinking that Borda Berri is the only great place for pintxos in Donostia, I do want to give an honorable mention to La Cuchara de San Telmo. It features a very similar menu, like Borda Berri prepares all its plates as they are ordered–no microwave here, folks–and offers creative and innovative dishes at equally reasonable prices. The mushroom risotto here is but one of their many excellent plates. 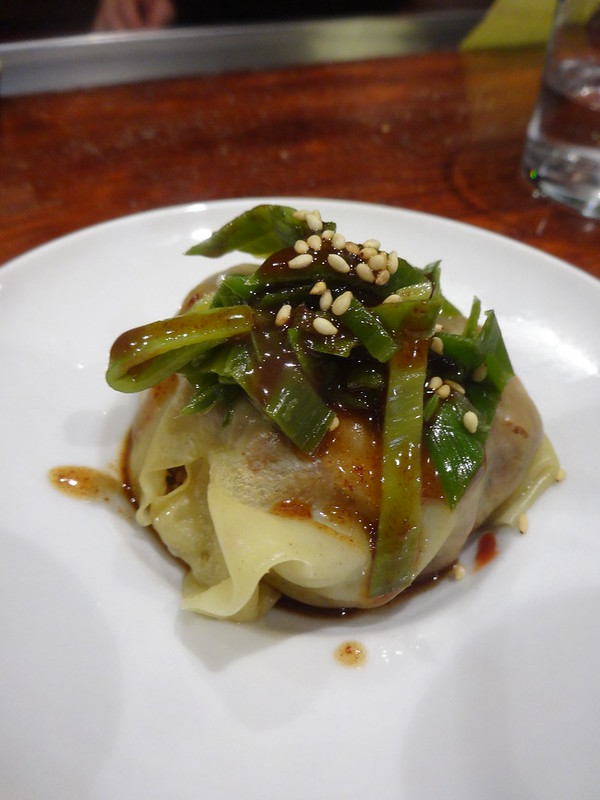 Probably the best dish at La Cuchara de San Telmo is the duck ravioli; out of everything we tried here, it was the only one that was better head-to-head than a similar dish at Borda Berri. What set it over the top was the leak garnish–slightly buttery and a refreshing change of pace from the fattiness of the duck–and the quasi-ponzu sauce that laced the outer edges of the dumpling.

Have you been to San Sebastian before? Did I miss your favorite place? If you want to see more orgasmic shots of pintxos, check out what Pamplona is serving up these days. More of a dessert person? I have 5 places in San Francisco that you need to know about. First time here? If you love eating and traveling in style but on the cheap, you’ll want to have more of what’s cooking! Follow the blog for free updates from me on the road!

7 thoughts on “In San Sebastian, Perfection Comes In Edible Form”