The sun was beating down on our necks as we trudged northbound along the narrow, dusty road passing out of Taghazout and going to Essaouira. Two black goats peeked out of a nearby dumpster, briefly delaying their scavenging to peer out at us with glazed eyes, a piece of orange peel sticking out of the mouth of one and another chewing on the remains of a candy bar wrapper with the letters “ERS” printed on it. Just in case our aims to hitch a ride the 150 km up the coast were fruitless, we decided to stop not too far out of town, and we set our bags down next to a marker for km 153.

On one of our recent hitching forays from Zagora to Ouarzazate we had the idea to create a three piece sign that, when held up from the road, looked like this:

Lo and behold, only 20 minutes after we began our attempt a compact sand-colored Hyundai pulled over, and we ran over to make the usual “hey thanks for stopping, are you going to ___?” greeting. Our drivers were a Lithuanian couple on vacation for a couple weeks, both in their late 20s. The woman had blonde hair almost the color of ice and was wearing a tight blue shirt that displayed her ample bosoms to the world; the man was top heavy and had a gut that extended well over his waistline, with relatively skinny white legs exposed by some rather low-cut swim shorts.

Conversation dwindled soon after we hopped aboard, as it became clear that English wasn’t something they had great mastery of.  Nor was Russian an option for us, and conversing in Lithuanian bordered on the absurd (Luise knew the word for “darling,” a whopping 1 word between the three of us).

The Moroccan coastline north of Taghazout reminded me a little of the rolling chaparral hills of my home back in San Diego, although here the hills ended abruptly in precipitous drops straight into the Atlantic, which was a mashup of turquoise and limestone brown, with countless interruptions of white chop where the wind transformed the crests of passing swells into fine spray. It looked like the sky from Van Gogh’s “Wheatfield and Cypress flipped upside down so that it became the sea.

We stopped briefly near the top of a steep mountain ridge overlooking the ocean on our left, and after Franziskus had taken some pictures and a brief scare where we thought oil was leaking from the overworked engine, we were off again. When we arrived in Essaouira we thanked the Lithuanians and waded into the crowded Medina in search of our host Khalif.

We found him with two other couchsurfers, a German named Toby and a Frenchman named Sylvain, smoking cigarettes and taking a coffee by the main plaza. There were street cats lying about the sun-baked stones of the plaza, although one audaciously decided to steal my chair from me when I got up for a moment, so I sat on the edge of the seat and leaned back over it—it seemed to prefer that position, because it stayed there for another 15 minutes.

I was feeling a bit tired from all of the exposure to sunlight in Taghazout, so while the others stayed up late I passed out a bit earlier. The next day we went out for a late breakfast, and sometime between the two hours we were gone a thief came in and stole Khalif’s laptop and Luise’s iPhone. It turned out we had forgotten to place a padlock on the outside of the door when we left; we found him distraught when we returned from our meal. After frantically searching the flat, we went to a souq full of electronics, asked around for the stolen goods and even took a taxi to the outskirts of the city to rummage around a massive junkyard that extended to the edge of the shore. The smell was horrendous, the landscape was depressingly contaminated with every sort of detritus imaginable, and nothing turned up.

Things took a bizarre turn later that night, when out of nowhere the lights went out—I shrugged it off as faulty wiring, but Franziskus wasn’t convinced. Confirming his suspicions, not much later an older man pounded furiously on the door and demanded he speak with our host, who had left to pick up two more couchsurfers. The landlord threatened to call the police and have Khalif arrested for illegally hosting foreigners, and it turned out his rage was somewhat justified: we never found out how much Khalif was behind, but the landlord had gone without rental checks long enough to march upstairs and drag his tenant to the police. We calmed him down enough to let him go on his way (not before asking if he knew about the theft from earlier—I suspected it may have been a form of collateral) and then I developed a full blown fever that kept me home while everyone else went out to hear some music.

I was operating on almost no sleep from the night before so we took the bus 500 km north to Rabat instead of trying to score a major hitch-hiking victory. I passed in and out of consciousness and stared out at the windows—unlike the road from Taghazout to Essaouria, we rode inland most of the way. Mountains turned to sparse grassland, then finally to plowed fields with the occasional grove of oaks or olives. It could have passed for the Spanish Meseta in springtime.

When we arrived at night in Rabat, we were reunited with Victoria and Alina and were hosted by three really chill students who live with their parents just inside the Medina. Franziskus, Luise and I almost wept with joy from their hospitality—they had a genuine hot water shower, a real toilet, and fed us local Rabat cuisine of duck and chicken until we were full. I’m still not 100% but the good news is I have a flight to Barcelona in 9 days, so salvation draws near.

Also: My apologies for the lack of new photos. When we were at the music festival not too long ago my camera took a hard fall, so I’m going to search the souqs for some magical camera fixing genie in a bottle. Wish me luck! 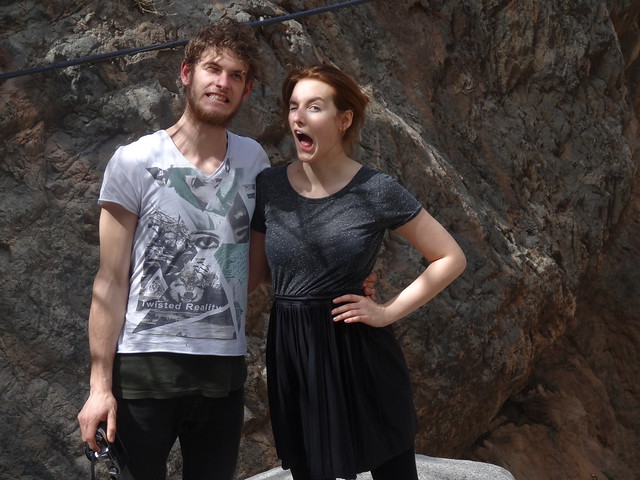 Double also: Luise and Franziskus depart today to London for a short break before Berlin. Thank you so much for your companionship, gallows humor, enthusiasm for hitching rides, and for being two of the most lovely hipsters I know! See you sometime soon in Berlin, my friends 🙂

If this is your first time on my blog, let me know in the comments section below! Wouldn’t it be awesome to read more about cool places like this every time you opened your email? Following my blog is free, and I don’t believe in spam–click on the “Follow!” button up there on the right for updates on my travels and inspiration for the next time you go somewhere new!