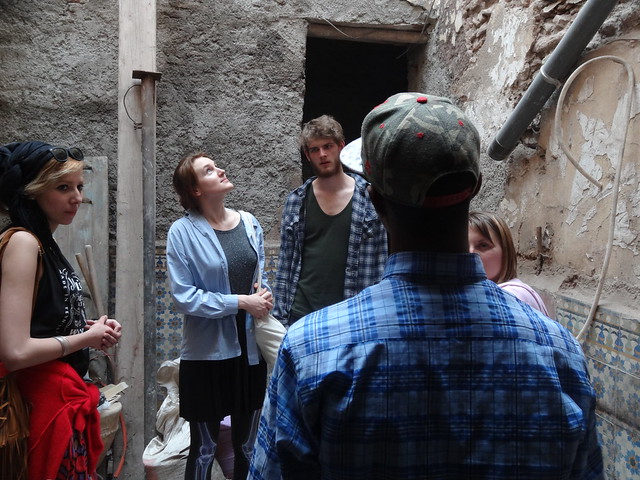 Etiquette dictates you make Couchsurfing requests two or three days in advance, and if you have to do them last minute you should provide a phone number or email for contact. What seemed like a benign gesture to ease communication backfired into a deluge of offers from Moroccan men for companionship or straightforward offers of sex with the pretty German girl who had posted a simple request for a place to sleep when we arrived later that night from Essaouira. 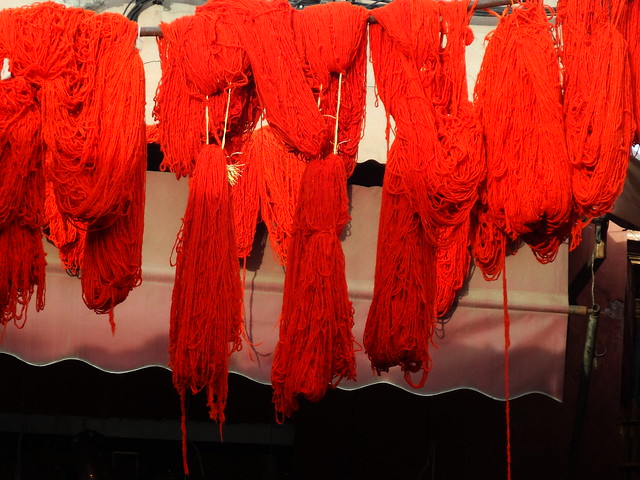 As fate would have it, the first person who contacted Vicky mentioned nothing of sexual favors and seemed very willing to host us for a few days in the city; his name is Marwan and despite stiff competition from hosts in Belfast, , Ghent and many other cities, I don’t think our experiences from the past 72 hours could have happened without him leading the way through the mazy Medina of Marrakech.

Marwan’s dad is Senegalese and his mom is Moroccan, and Marwan has lived here in the Medina his whole life. He’s a student at the local university and seems to know everyone in his quarter of the city. On our first night together we went to an anonymous looking restaurant (distinguished from normal street food stalls with the addition of chairs and tables, nothing more) in an obscure section of the Medina and ate a delicious concoction of ground beef with fried egg, cheese, Merguez sausage, and a dusting of mysterious spices. It smells very much like In-N-Out as it is being prepared, it costs less than $2 and it fills the belly. 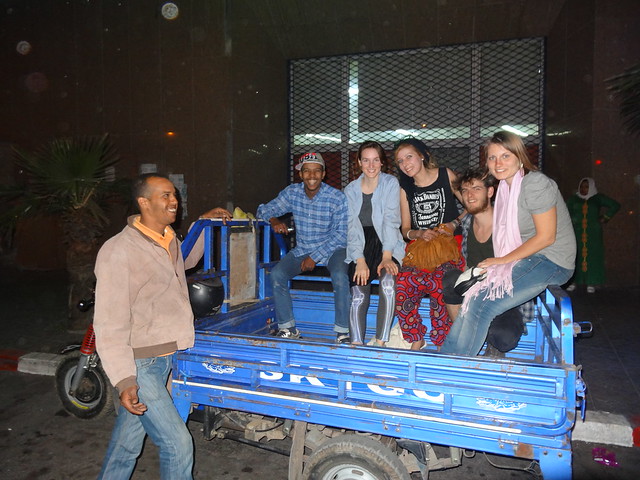 The next day featured the addition of two more couchsurfers to our trio: Francescus and Louise, architecture students from Berlin, had just started a three week long trip to Morocco without a set itinerary. Odds on finding someone you’re looking for in the vast old city are literally about the same as finding a needle in a haystack, but as Marwan, Alina, Vicky and I were walking about we bumped into the Germans on the street. And so four became six, and after an excellent lunch of tagine and avocado smoothies at a stall Marwan has been eating at since he was a boy we retreated back to the apartment to relax and make plans for an excursion into the mountains, but not before taking a wild ride through the streets on the back of a motorcycle driven by one of Marwan’s brothers. 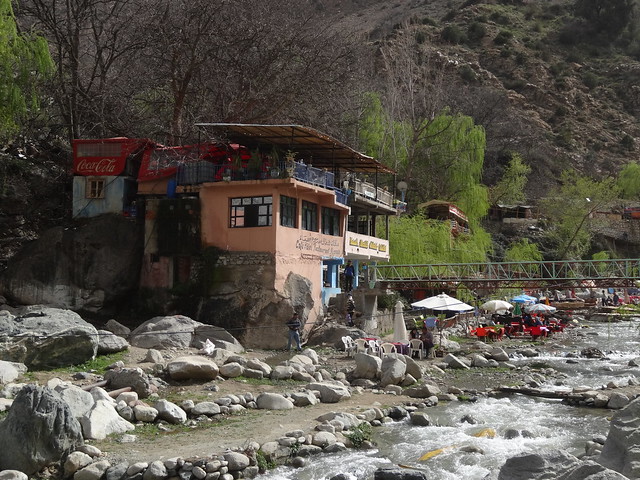 Ourika is the name of the small village tucked into a valley two hours’ drive by grand taxi from Marrakech. Since we had Marwan as our guide our accommodations were far from ordinary: for one day and one night we stayed in a freestanding tent covered in thick blankets and embroidered pillows. Nestled at the base of a waterfall, our tent was a home base for hikes up the river and into the mountain. 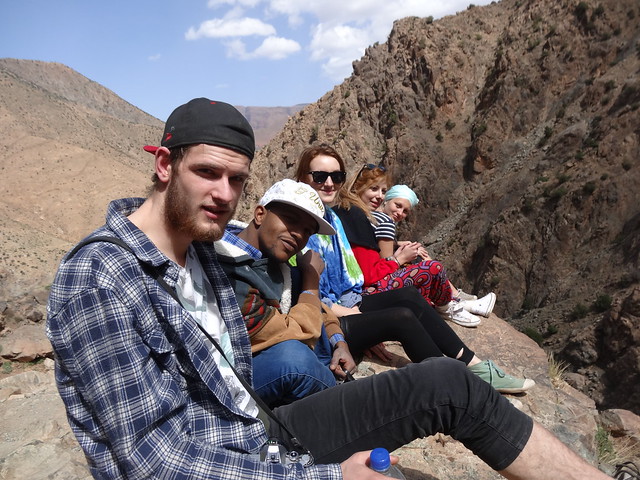 On our first day in Ourika we hiked up to the first section of the waterfall, scrambling over boulders and crossing a couple of rickety wooden bridges before emerging onto a shady perch overlooking the river valley below and the waterfall above us. 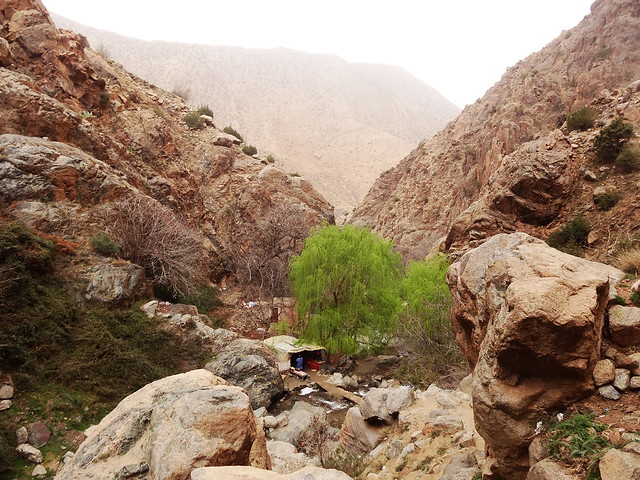 The hike and the thin mountain air whetted our appetites, and a sumptuous dinner of tagine and hot mint tea greeted us upon our return. 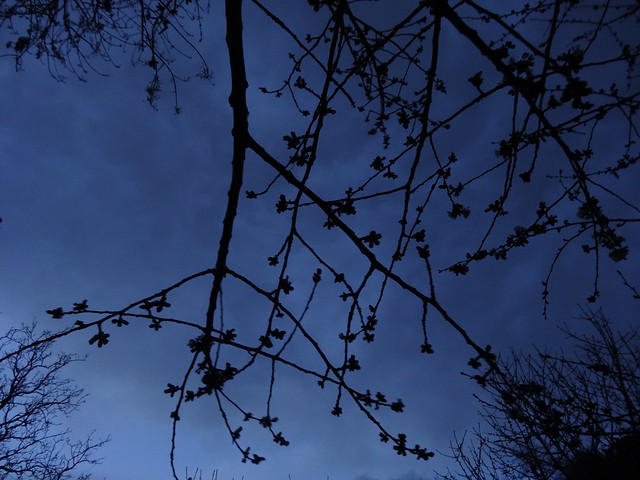 I awoke at dawn to the sound of birds singing, and a few hours later we set off on a more strenuous trek that immediately took us above the river valley and onto a narrow, rocky path that skirted the side of the mountain. 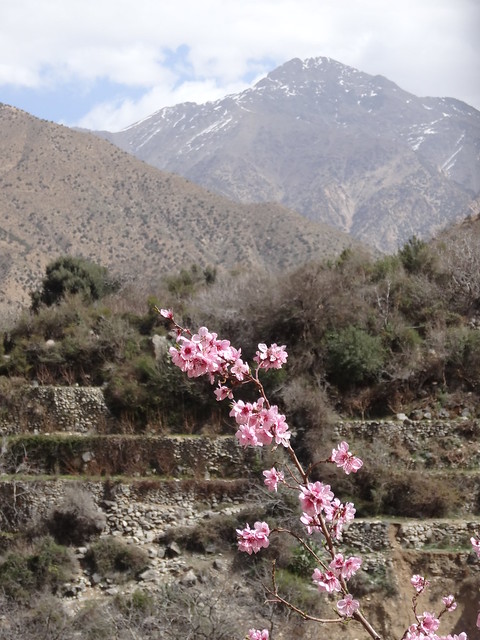 In America, trails like this might have a guard rail to protect hikers from falling over the edge, but Moroccan safety regulations either don’t exist or no one cares enough to enforce them. 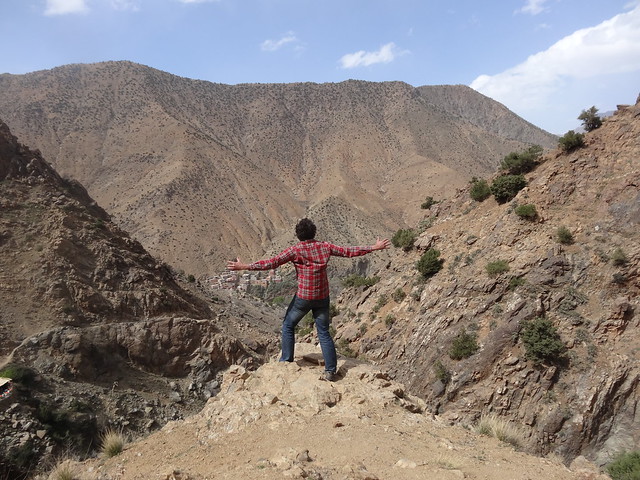 Vertigo wasn’t really an issue for us, but as we went higher up the path it became clear that not everyone was going to make it the full distance. 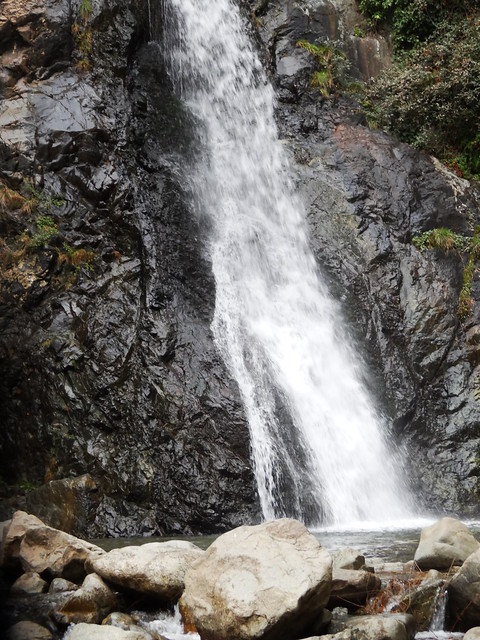 Eventually we made it to the base of the last waterfall, and after taking a refreshing dip in the pool at the base of the cascade Francescus, Louise and I decided to keep climbing while the others waited below for us. 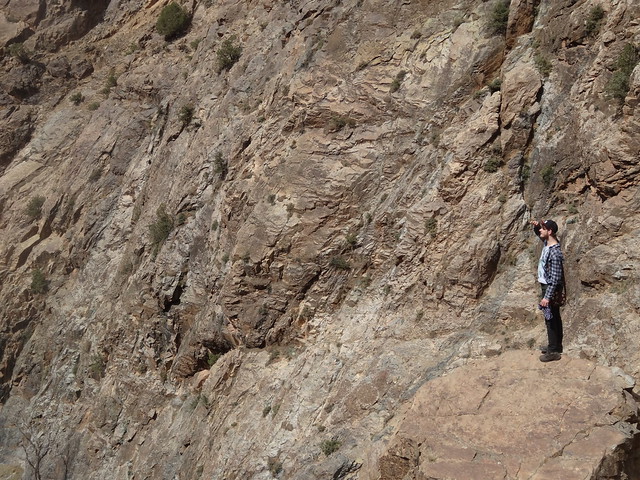 Ascending the steep rock face wasn’t very difficult but it was tiring work, and for a while it seemed like the mountain was never going to let up. 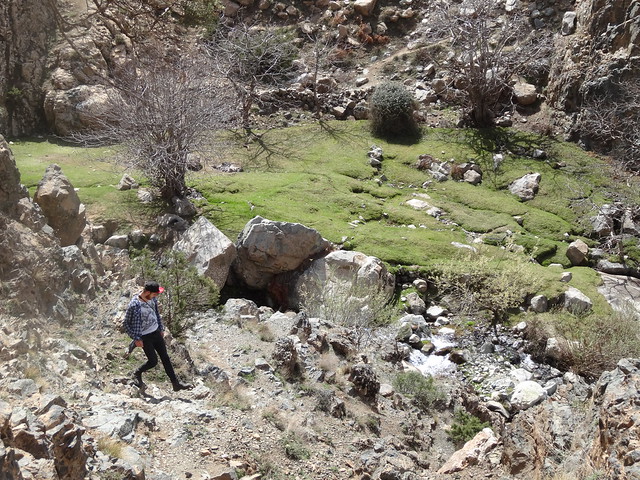 Francescus pushed ahead of us and when we heard him gasp in awe we knew it was worth the sweat. We had made it to the top of the waterfall that had drenched us only thirty minutes before, and the oasis of soft green grass and budding trees that sat between two steep faces of rock and dirt seemed like a mirage. 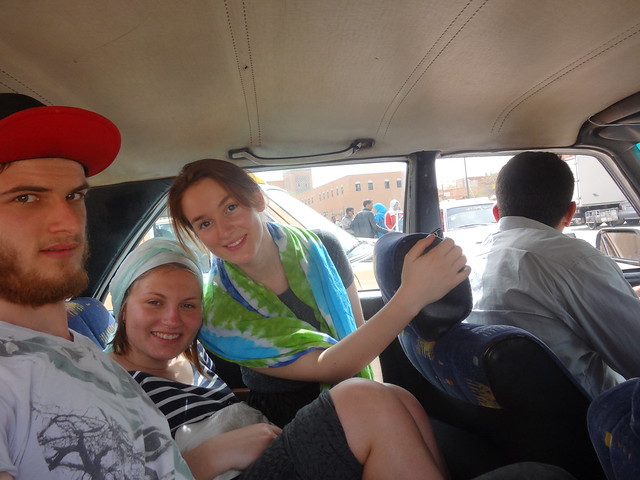 Because our friends were waiting for us at the bottom of the mountain we didn’t linger too long, and after regaling them with tales and photos from the top—Marwan had never been up that far before, so he was pleasantly surprised at what we found—we walked down the mountain back to our tent for one last meal before taking a taxi back to the big city.

Lost amidst all the excitement of the past few days was the rather smelly fact that none of us had properly showered in days, so when we arrived in Marrakech last night Marwan took us to a local hammam, or bathhouse. The girls went into a separate area of the hammam, leaving the three of us men to wash ourselves in buckets of scalding water inside a series of sauna-like rooms. After an hour of sweating and scrubbing we exited the washing room to put our clothes back on.

Francescus went over to the reception desk to drink some water, and as he put the bottle to his lips he collapsed onto the floor, his head thankfully the last thing to hit the ground. For a second or two Marwan and I thought he was playing a joke on us, but then we realized he had actually fainted. We turned him over onto his back and quickly sprayed his face with cold water, calling his name and tapping on his chest. I was trying to remember whether his head should be tilted forward or back in case of a seizure and simultaneously wondering how long it would take an ambulance to shuttle Francescus to the nearest hospital by way of the Medina’s topsy-turvy streets. All of this happened within the span of about 10 seconds, but then Francescus woke up, dazed and confused and mildly concussed. We’re going into the desert for a music festival and at the very least the fainting spell should be a good reminder to stay hydrated; an ambulance call in the Medina is daunting enough and I’d rather not imagine requiring medical attention in the middle of nowhere.