It’s about midnight and I’m walking down Brick Lane with Nathan.

The other Nathan–my couchsurfing host here in London–has decided now would be a good time to go for a tour of Aldgate, the nerve center for banking in this part of the world and Nathan’s neighborhood for the last two years.

We’ve been walking past neon-colored signs advertising the best curry this side of Delhi when an abrupt change in cuisine takes place.

All of a sudden, there’s a change in scenery. Neon signs with names like Chillies and Bengal have disappeared; there’s a white sign that reads “BEIGEL BAKE / BRICK LANE BAKERY / OPEN 24 HOURS 7 DAYS” and its milky gleam spills onto the worn asphalt pavement. 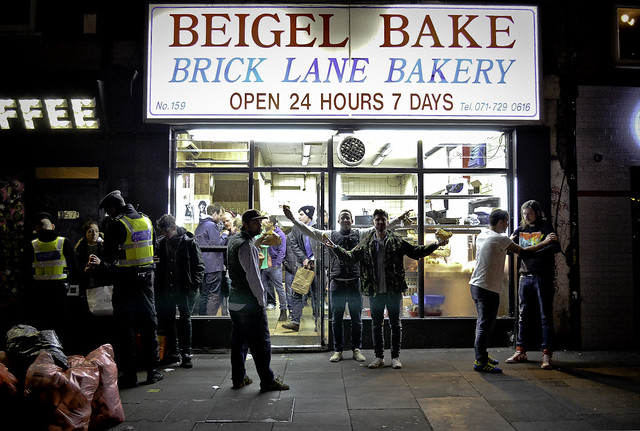 Two seconds ago I wasn’t even hungry. Thanks to a radical assault on my nostrils by the scent of fresh baked bagels and the mouth-watering sight of a slab of salt beef sitting alluringly in the window, I’m famished. We enter this heavenly place.

Nathan has been here before, and he advises me to get what everyone gets when they come here for a late night snack: a bagel with salt beef. I get mine with mustard slathered on it, then walk over to a standing-only countertop and bite into it. It’s less greasy than I expected, but just as beefy and salty as I’d hoped. The bagel is humble but stands up to the hefty pile of meat on it, and the tang of the mustard leaves my mouth feeling fresh.

I ask Nathan to grab a shot of me with his iPhone.

“First time for you, isn’t it?” asks the man standing just a little ways down the bar.

I grin, my mouth still full of salt beef and bagel, and nod happily.

The man moves a bit closer to us. He’s black, about thirty years older than us, and wearing a purple blazer that’s much less flashy than you’d think it would be.

He introduces himself as Gerard, and asks what I’m doing in London.

So I tell him–at this point I’ve become a master of condensing a year’s worth of travel into a brief 20 second introduction.

It turns out Gerard is part of the old guard. He grew up in Brixton, the heart of Afro-Caribbean London. He doesn’t live there anymore, but he’s seen it burn, seen it flower. I ask him if he’s met Linton Kwesi Johnson–he hasn’t, but his face lights up when I say the name. Everyone in his generation knows the name.

I have to tip my cap to Contemporary British Literature 101, sophomore year at Brandeis, for that one.

Gerard has seen a lot and done a lot. He handles the council housing (what we would call the projects in the USA) for Shoreditch, an area that’s just about completely gentrified. Apparently there are still some hangers-on. It’s good to see people like him, and know that the place isn’t becoming completely over-run with yuppies.

One of his other favorite writers is Gerard Manley Hopkins, who I know from another class I took as an undergrad. As Kingfishers Catch Fire is a great poem, I tell him, and he agrees. Meanwhile, other Nathan, who works in accounting, is probably wondering if he’s walked into an English nerds convention.

Gerard remarks how this place has changed a little bit in the decades that he’s come here. Apparently there used to be an older grizzled man who worked in the back of the kitchen. If you asked him nicely, he toasted your bagel before putting the meat on, which was a godsend on cold winter nights.

“The ones who work here now”–he glances cryptically over his shoulder at the ladies behind the counter–“are alright, but they don’t know all the tricks.”

After we finish our bagels–they’re not very big, but they’re definitely heavy–Gerard wipes his mouth with a napkin, shakes our hands, and excuses himself.

12 thoughts on “The Bagel Man”