This is what I looked like after 4 days without a shower, 2 consecutive nights of silent disco, a cumulative 12 hours of something resembling sleep, and getting my face melted for 3 days by some of the best post-, math-, and psych-rock bands on earth. All told, I think I came away looking pretty good. 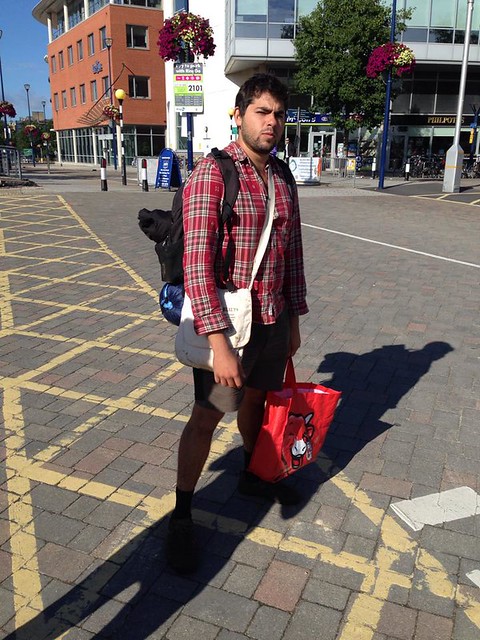 Out in the rain-soaked fields of Fernhill farm in Somerset, UK, a second-year music festival called ArcTanGent shook a few thousand weirdos and me down to the core. It was an endless storm of noise, humanity, mud, and all-around good vibes, and I was lucky enough to be caught in the middle of it. Here are my top 5 takeaways from what is probably one of the most underrated music festivals in the UK or anywhere else.

1. The lineup is devastatingly good

One of the best things about this festival was that the lineup was incredibly deep—and this was also one of the worst things about it, too. Everyone I talked to bemoaned at least one clash that made them choose between two equally great acts. 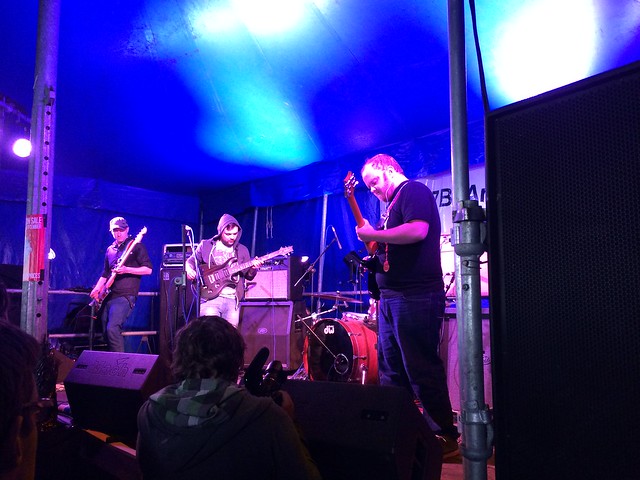 Upbeat and unheralded Waking Aida put on an energetic and inspiring show in the cozy PX3 Tent at the same time that Mutiny on the Bounty— the only band from Luxembourg that I’ve ever heard of— took over the main stage and blew people’s faces off. Similarly tough decisions included Maybeshewilland El Ten Eleven, LITE and I Like Trains, and many more.

Unless ArcTanGent lets bands play from sunrise til midnight, next year will throw up equally terrible dilemmas for attendees.

2. People at ArcTanGent are awesome

Somehow I didn’t get the memo that the weather was going to suck and brought an emergency shelter—essentially a tin-foil blanket—in lieu of an actual tent. Were it not for Danny, Harry, and Joel, three Yorkshiremen who took me in out of kindness (or pity), I would’ve drowned in the rain. They let me sleep in their tent, provided booze, and even took me back to Bristol when the festival ended. They’re saints. 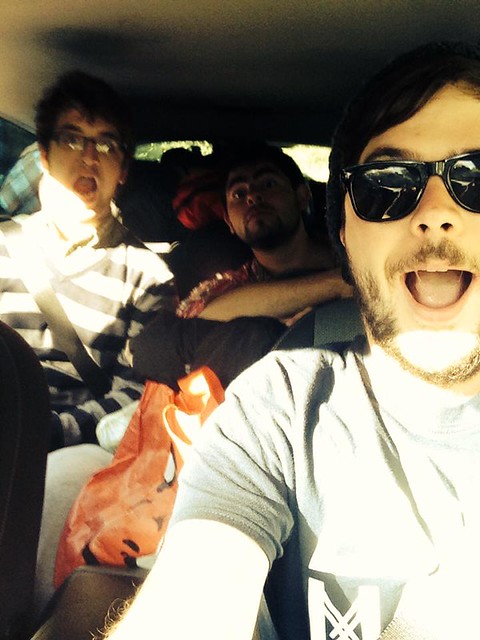 Not to be outdone, my friend Nick—who I met last December in Glasgow—introduced me to Alex from Leicester. Since I lost my own camera, the photos you see here are from Alex; I couldn’t have asked for a better stand-in photographer! Nick also introduced me to Lizzie and Katie, two sisters from London, and Lizzie (who looks a bit like Zooey Deschanel if you squint) insisted on buying me drinks and food when my money ran out after the first day. 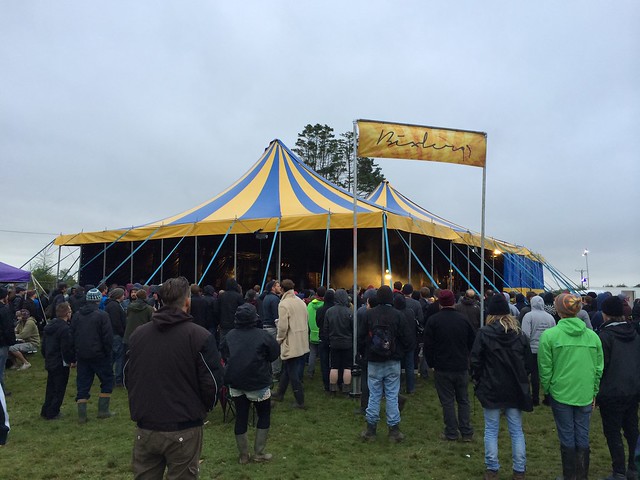 Were it not for these amazing people, I probably wouldn’t have enjoyed ArcTanGent nearly as much—as I have come to learn from traveling, it’s more about the people you meet than the places you go.

3. Don’t bring your camera into a moshpit

And So I Watch You From Afar (who I was fortunate enough to catch at Light Colour Sound Festival last month in Ireland) can always be counted on to lift people off their feet with their in-your-face sound. 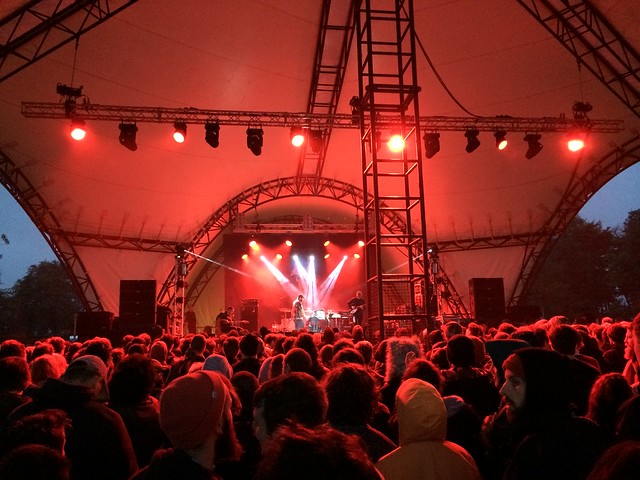 I joined in the mosh pit that formed in the center of the audience. At some point the scuffle caused me to lose balance, and I fell briefly to the ground before being pulled up to my feet (despite the belligerence associated with mosh pits, people take care of each other).

Not much later I reached into my pocket to get a shot of the band and realized my camera was gone. Did it fall out when I hit the floor, or did someone pickpocket me? Either way I never found my camera. I silently cursed myself for about 15 minutes of their set and then stopped griping because cameras are replaceable but moshing with music-happy rowdies are not.

4. For the middle of nowhere, Fernhill Farm is an
excellent venue

ArcTanGent was held 15 miles southwest of Bristol and roughly half that distance from the city airport, sitting on a hilltop overlooking the Mendips Music festivals in off-the-grid locations have a tendency to be covered in mud, feature disgusting toilet facilities (if they even exist), and sell food severely lacking in quality relative to the price. 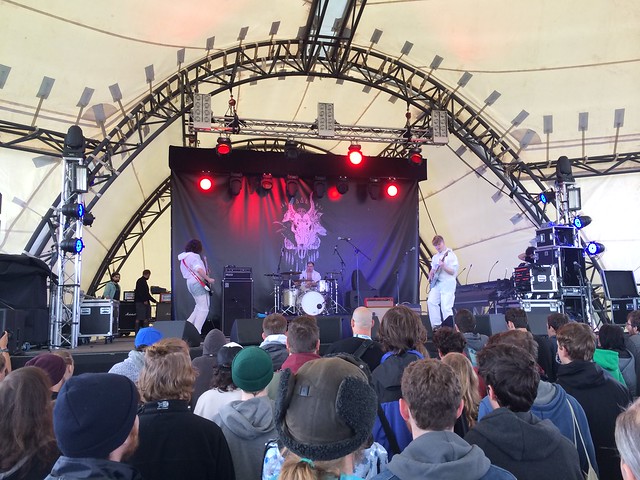 There was no getting around the mud factor at Fernhill Farm—the place resembled a pigsty by the middle of the second day—but despite the mess the facilities were the cleanest I have ever seen at a festival. While the food wasn’t cheap, a stall run by the farm itself featured meat and produce sourced directly from the farm, so quality was never in doubt.

5. There’s the right mix of
unknown gems and big names

ArcTanGent struck a balance between heavyweights like God is an Astronaut and This Will Destroy You with relatively unheralded acts such as Rumour Cubes and Theo. Whoever at ArcTanGent was in charge of curating a list of performers also did an excellent job of mixing up various genres of music; this was hardly a one-track sort of festival. 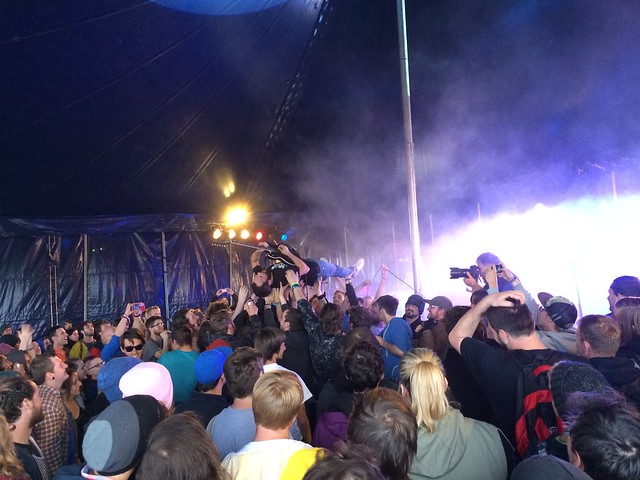 Year of No Light veered off into territory between darkjazz and metal; Baby Godzilla gave a screamo performance that literally burst beyond the stage; EF gave us beautifully undulating soundscapes and deeply emotive songs; Nordic Giants combined socially-conscious videos, feathered costumes, and voiceovers.

Were it not for my desire to finally return home, I would already have my ticket for next year’s festival bought. If you’re lucky enough to be around, you can buy your ticket here at 20% off—a great deal not to be passed by! 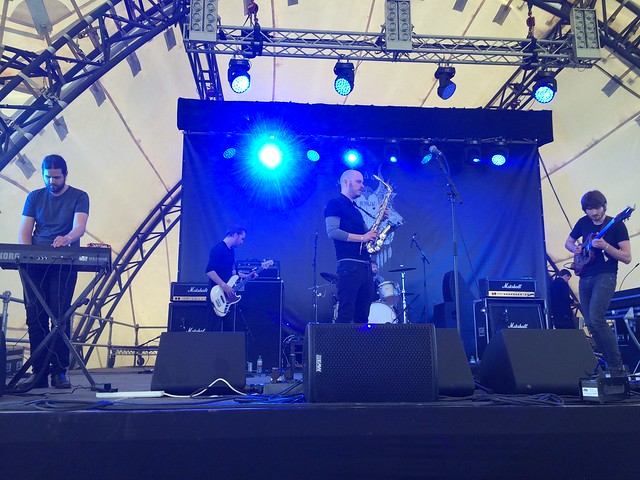 My thanks to Goc O’Callaghan for making it possible for me to attend ArcTanGent without going broke, the lads from Yorkshire, Nick & Friends, and even creepy Rich from London for creeping (Lizzie knows what I’m talking about).

If you were at ArcTanGent this year, I’d love to hear what you thought of it! What were your favorite perfomances? Who do you want to see headlining next year?

One thought on “Don’t Bring Your Camera Into A Mosh Pit: 5 Revelations From ArcTanGent Festival”