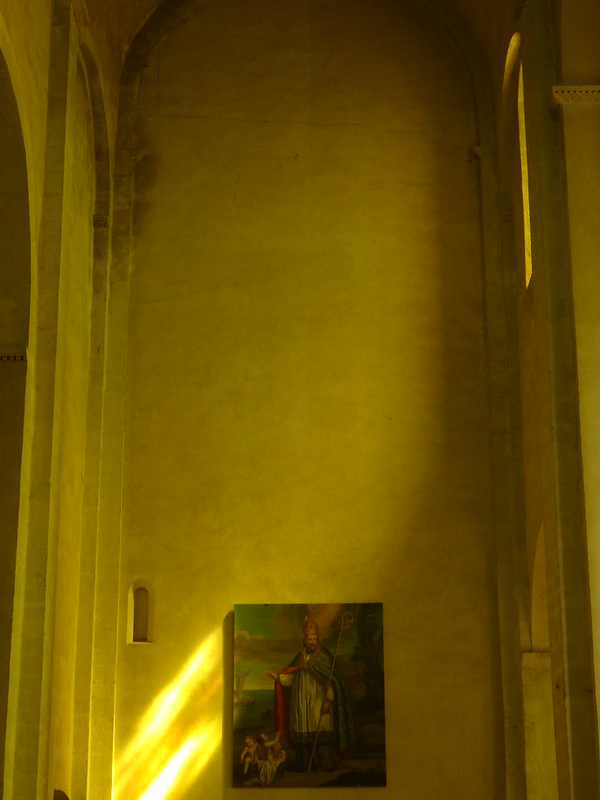 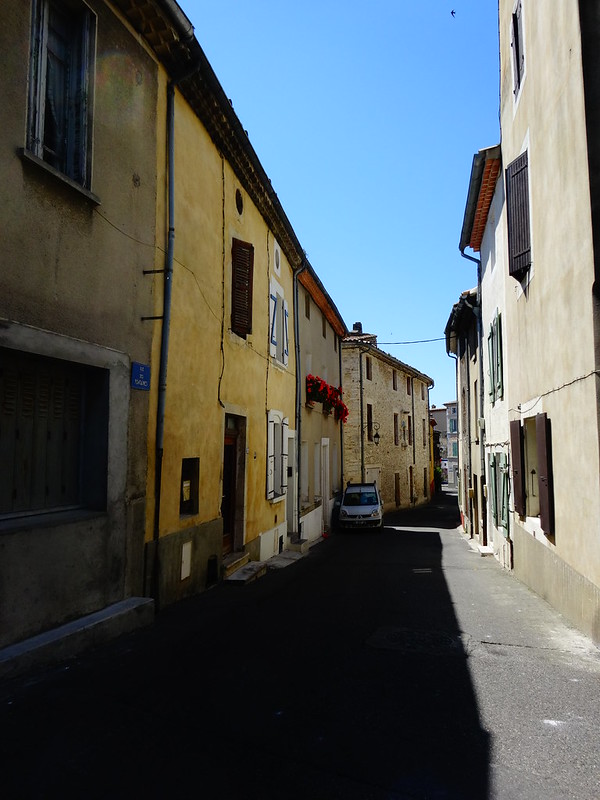 Since they carry around a couple of wide-angle lens behemoths on tripods and I have a slightly less imposing digital camera, my efforts in spaces like Saint Andeol pale in comparison to their shots. So while Dennis arranged shots of the nave and PJ flitted about impulsively in the search for the perfect chiaroscuro, I ventured out into the town. 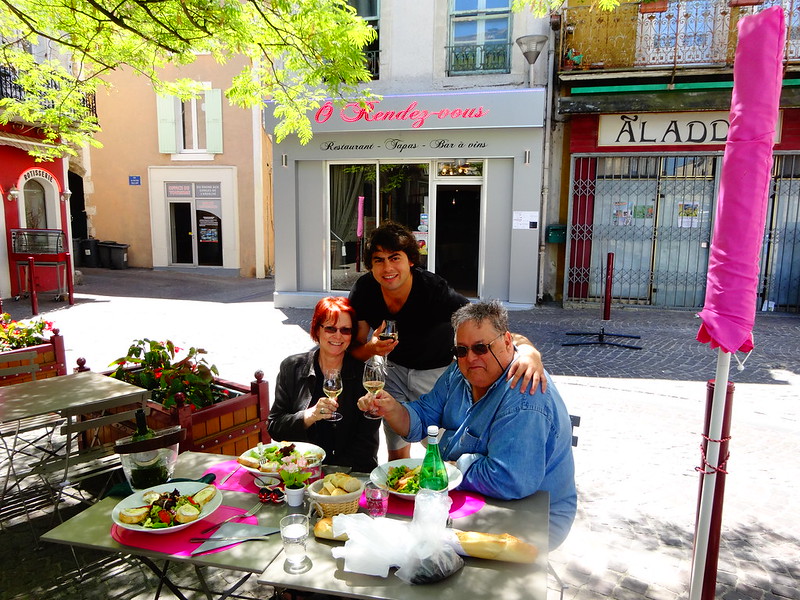 We caught up over an excellent lunch of chevre salad and fresh white wine from the Ardeche before moving on to the next church. 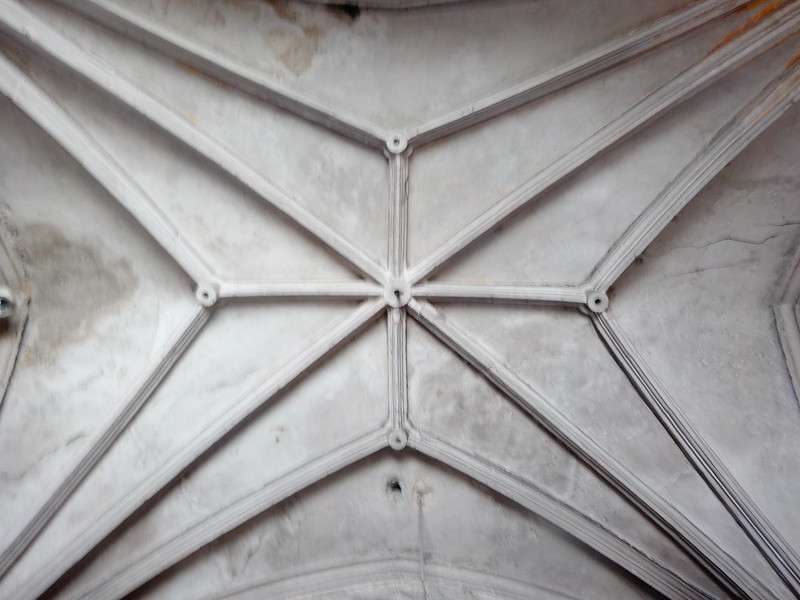 That church happened to be Ruoms, and this is a cloudy shot of the Gothic vaulting in a small side chapel. Dennis just posted an article about the history of the church, which used to be a Cluniac abbey. 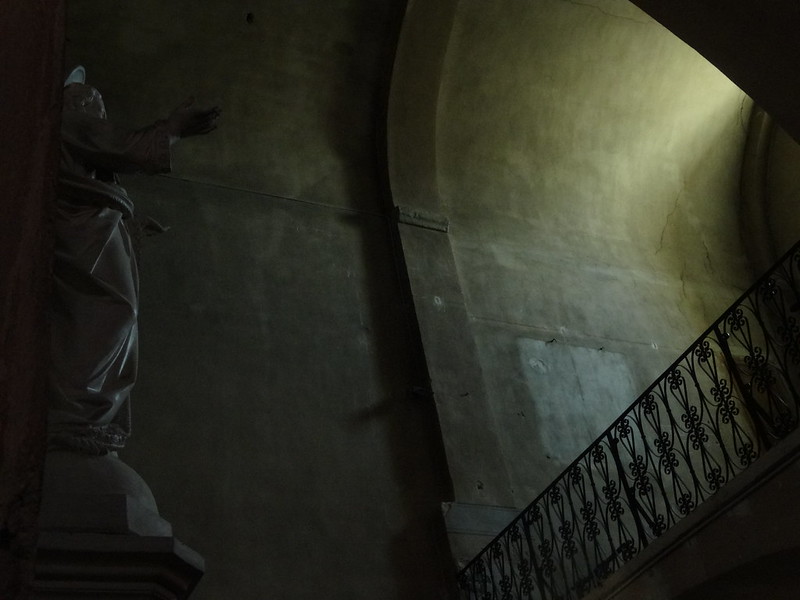 The thick walls of the church allow very little light to penetrate into the nave, but what light does come through is spectacular. 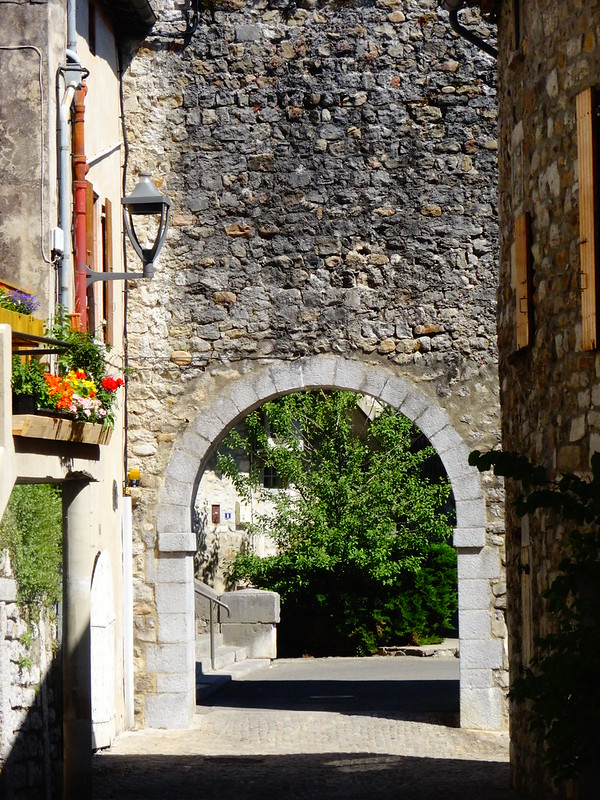 Ruoms has a well-preserved Medieval quarter, and the old walls were incorporated into houses and other buildings along the outer edge. 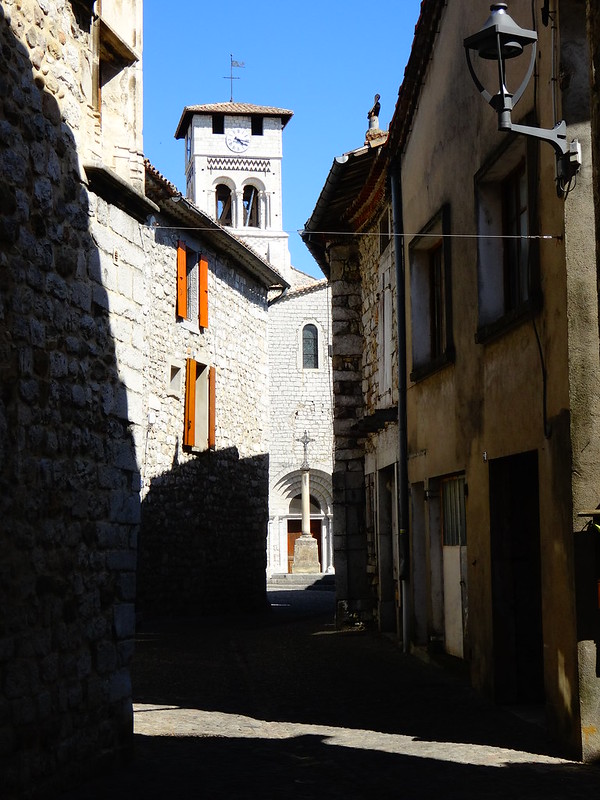 It was a hot Saturday afternoon when we shot Ruoms, and the narrow streets provided lots of welcoming shade. 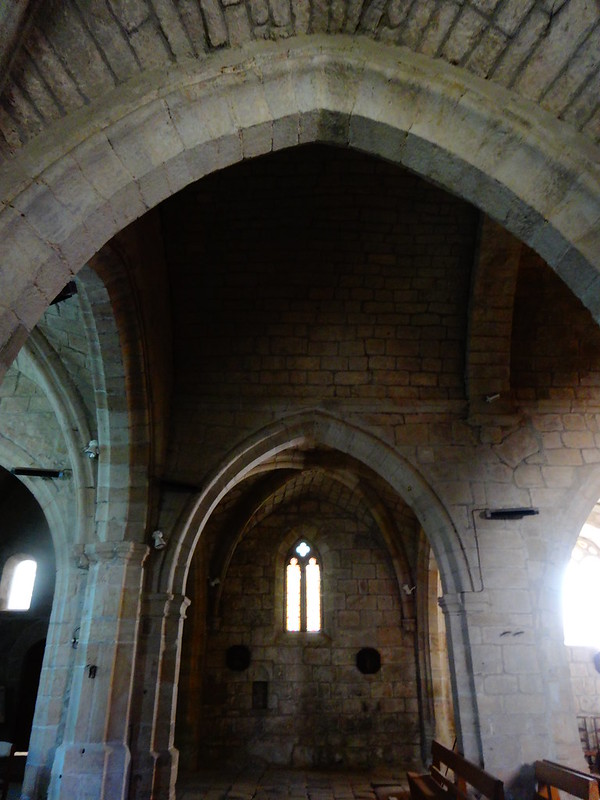 The next morning we drove around in circles several times before finding a proper road to the picturesque town of Ailhon. The parish church there has a Romanesque nave vault, with a redone Gothic arcade. 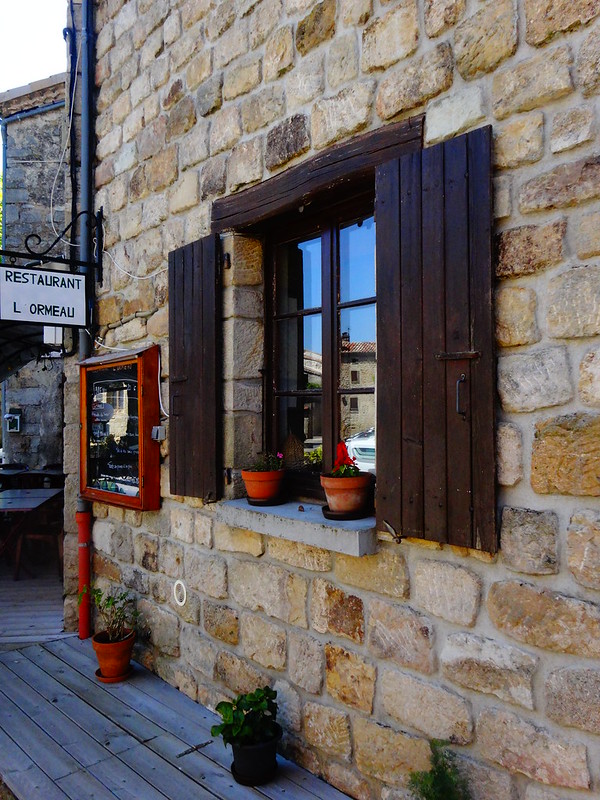 We were lucky to have found our way to Ailhon, because the road the GPS originally sent us down was meant for ATVs. The narrow strip of asphalt that threaded its way through dense hillside forest which we eventually took up to Ailhon wasn’t much wider than our car but at least it was passable! 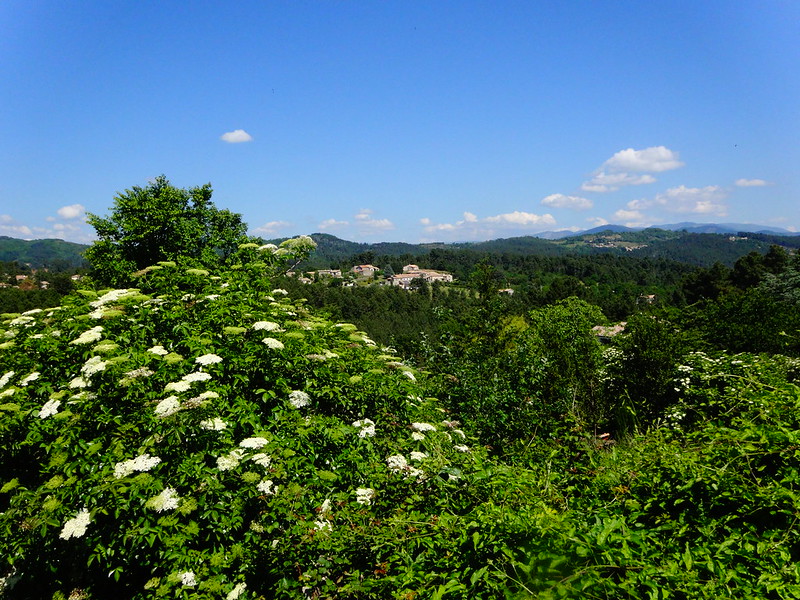 We were rewarded for our trouble with the church to ourselves and lovely views across the valley. 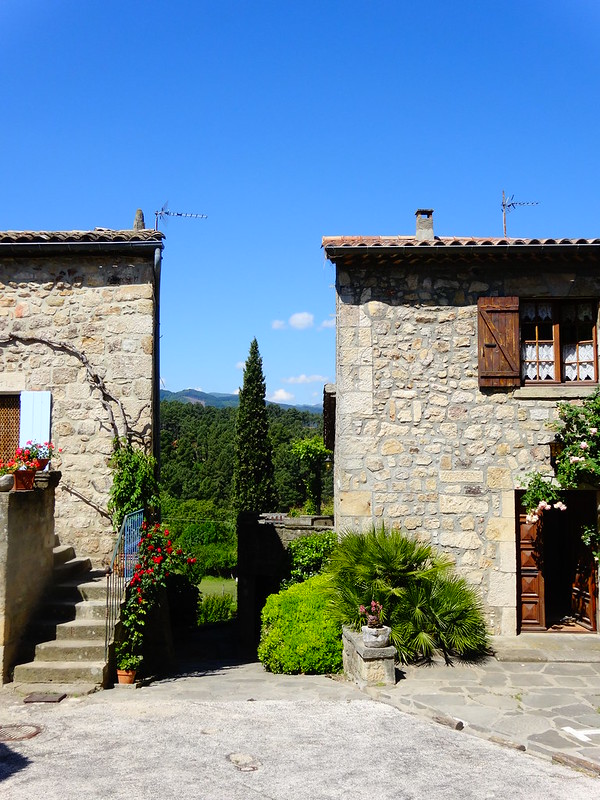 As I wandered around Ailhon taking shots, I ran into a pretty friendly cat that literally leaped into my arms. 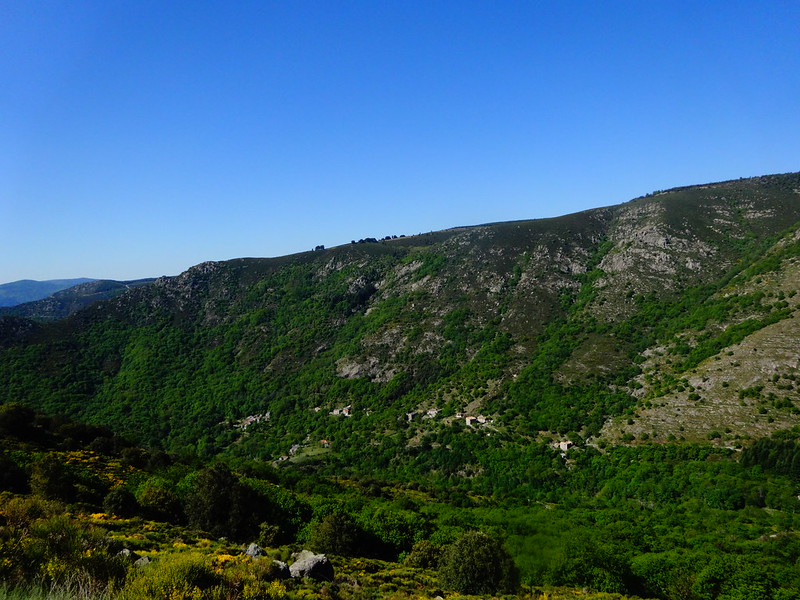 Forgive me for going backwards chronologically, but the day before we were in Ailhon we made the breath-taking drive to a tiny valley nestled at the bottom of a mountain pass. There lies the village of Thines. 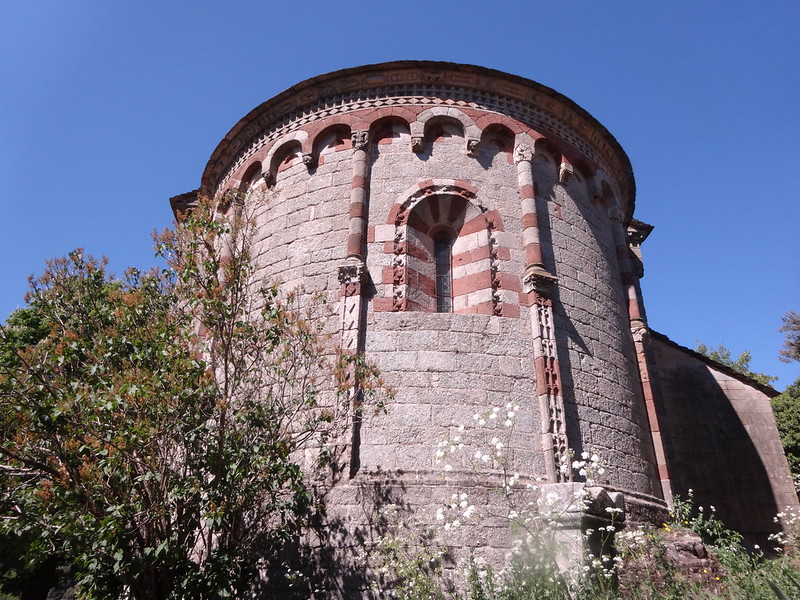 The church of Thines is by no means a humble pile of stone; they hired the best sculptor they could find. Whoever he was, he had talent. 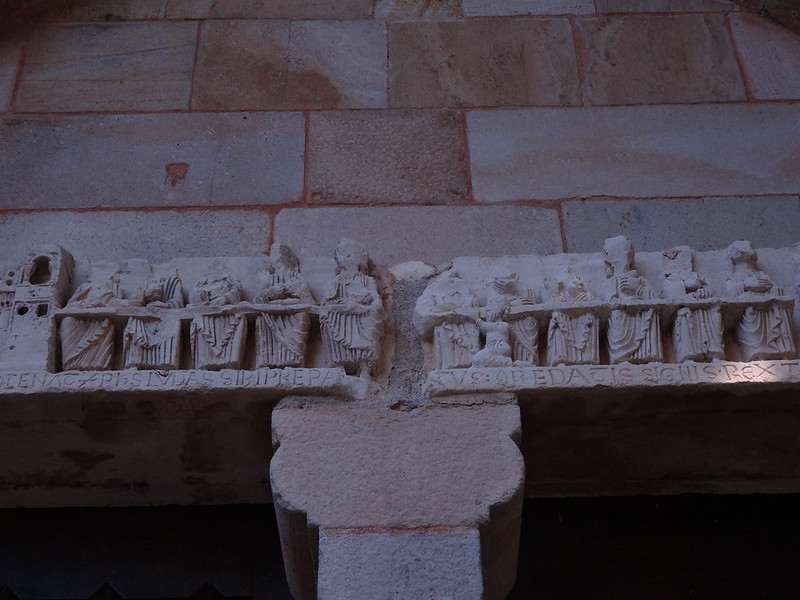 The portal at Thines is south-facing and features a spectacular narrative of the life of Jesus, including a dramatic Last Supper with Judas kneeling at Christ’s feet. 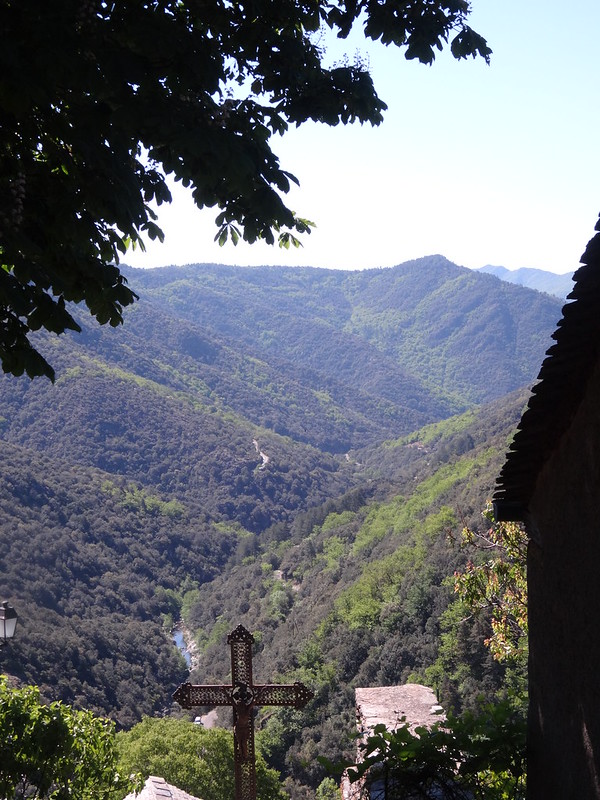 This is the view of the river valley below, which you see just as you exit the church. 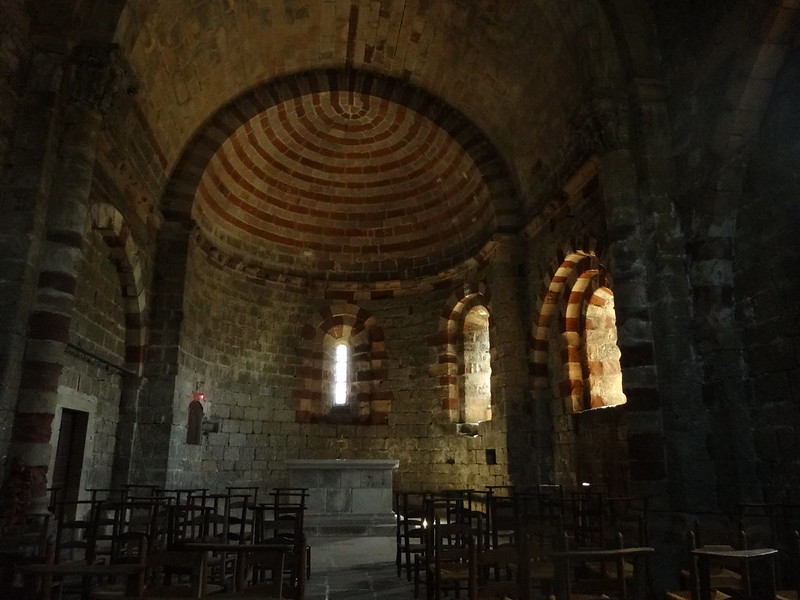 The inside of the church is also stunning; tragically, a Romanesque sculpture of the Virgin was stolen from the church back in the 1970s. The town still sits vigil for the original vierge roman, which you can see a photo of in the back corner of the nave. 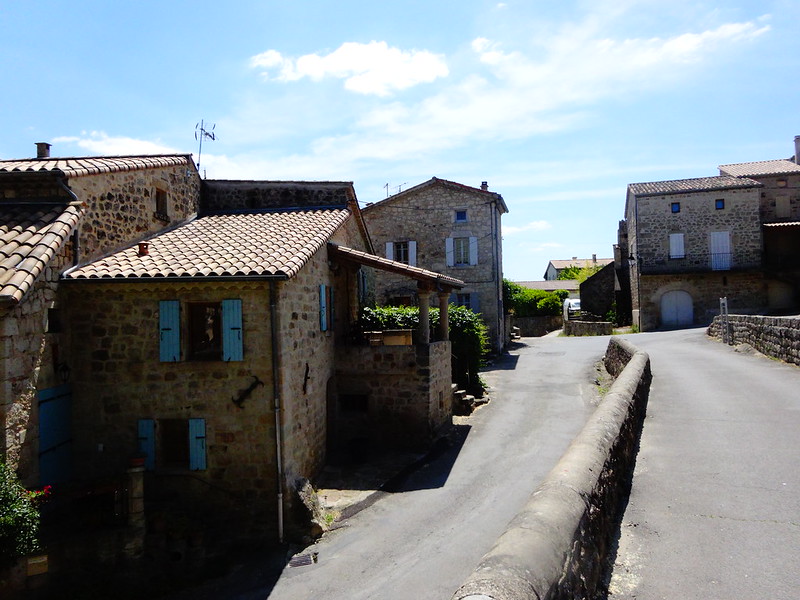 Though Chassiers did not have a church quite as memorable as Thines, I think I liked the look and feel of this town the most out of any we visited. 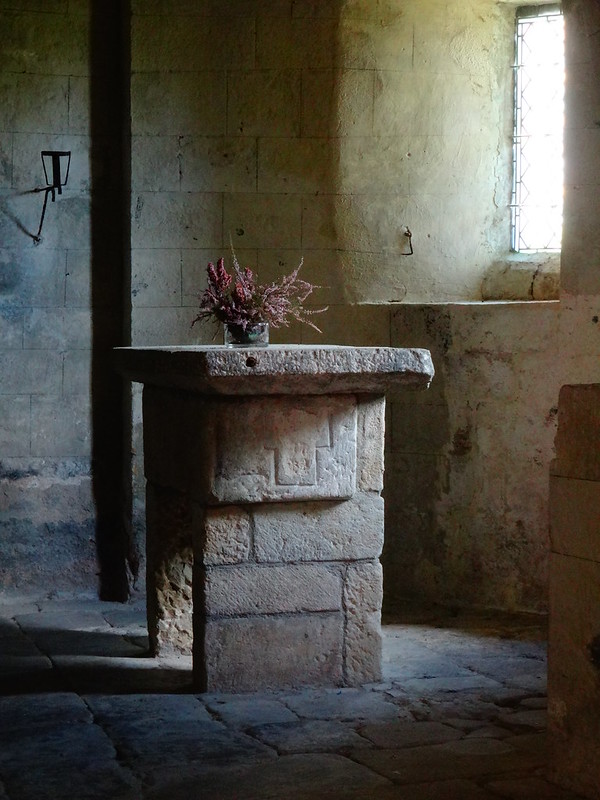 This isn’t to take away from the Romanesque chapel we came to shoot–how could you not fall in love with this? 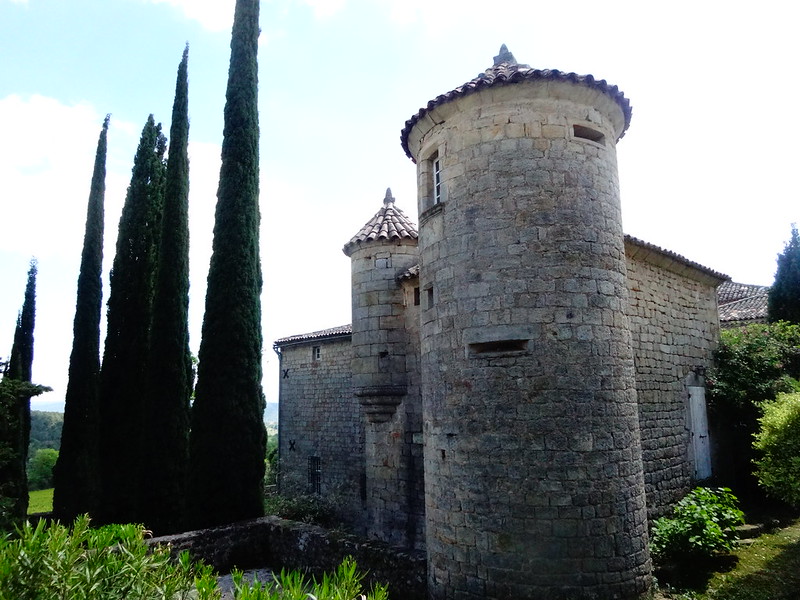 This chateau is privately owned and incorporates turrets from the 13th and 15th centuries. It must be nice to actually have your own castle, although I imagine it gets dreadfully cold during the wintertime, and upkeep is probably endless. 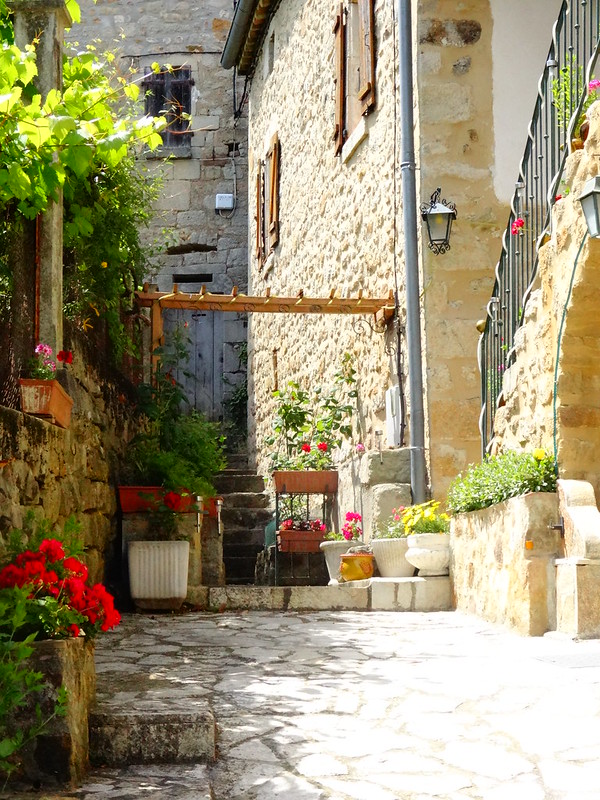 Chassiers seemed to epitomize the bounty of spring: there were blooming flowers everywhere. 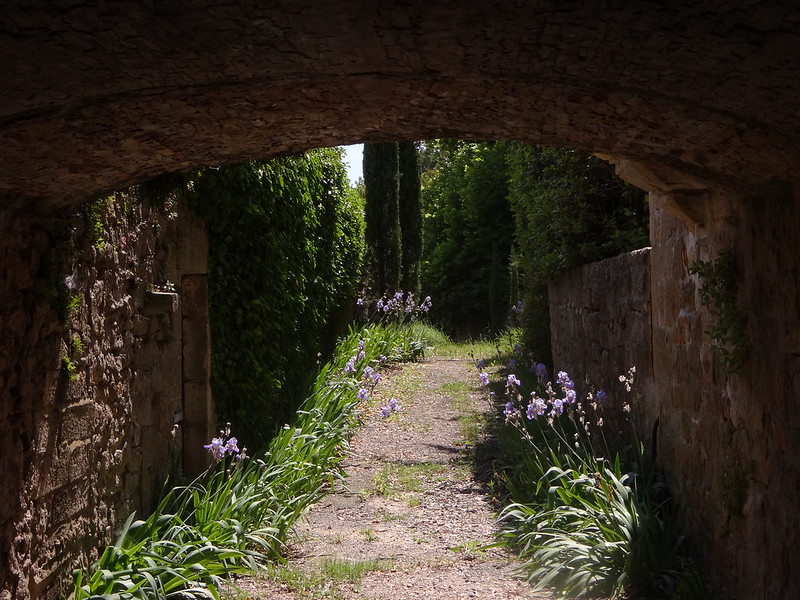 A tunnel running beneath the chateau leads to an olive grove behind the town, with patches of wild lavender growing along the path. 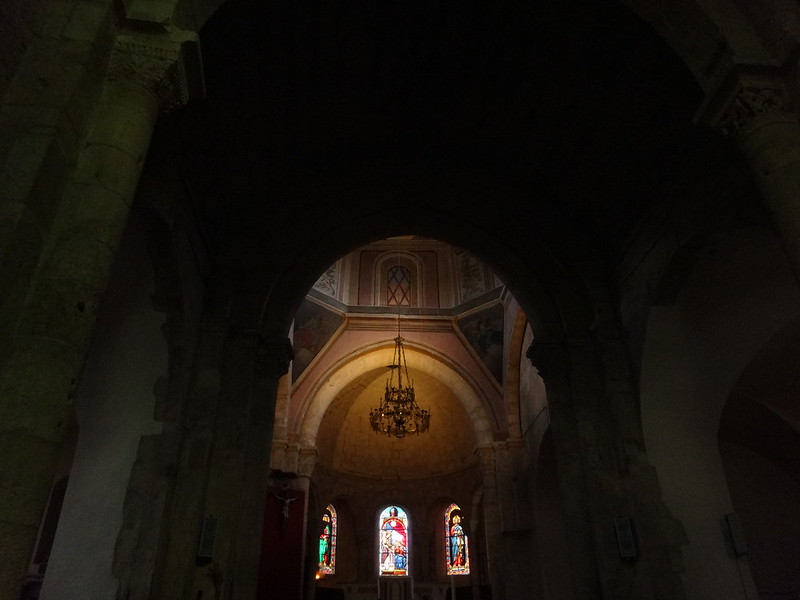 Our last stop was Vinezac, home to a mostly renovated church with a couple of Romanesque remnants. 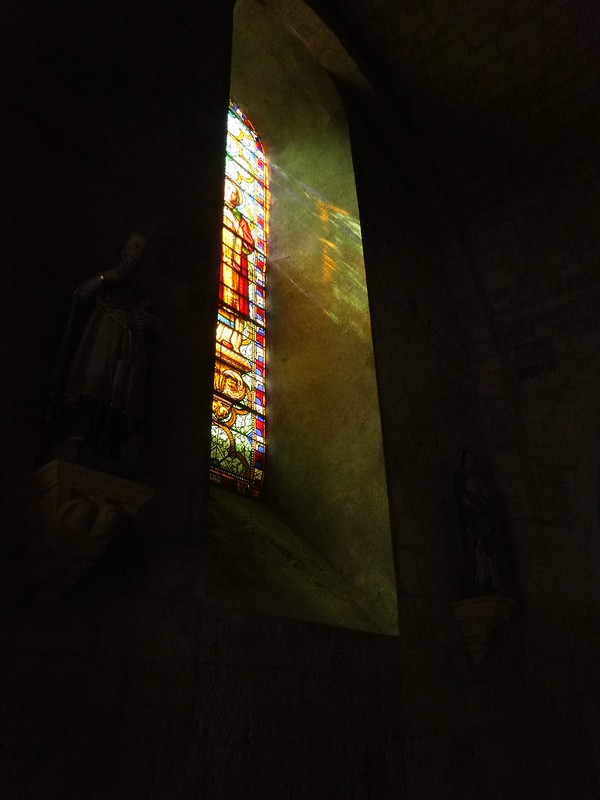 The stained glass was installed in the last couple centuries but just because it’s not as old as the glass at Chartres does nothing to dampen its effect. 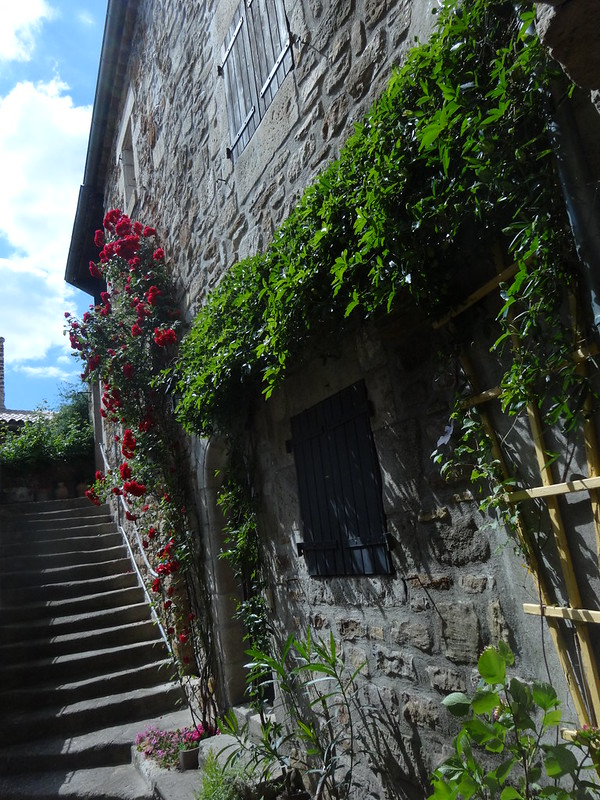 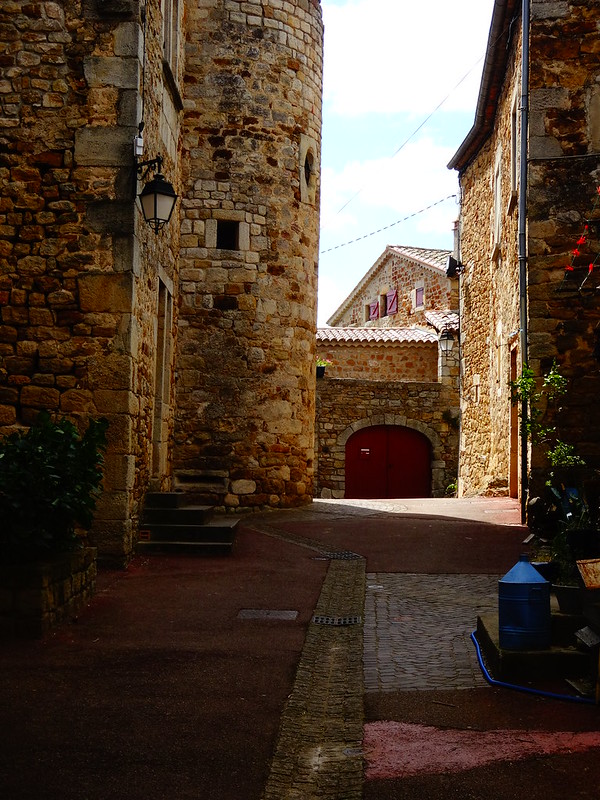 When we were there clouds shifted and the sun came out, only to be covered up again. This was one of the lucky times when the clouds parted. 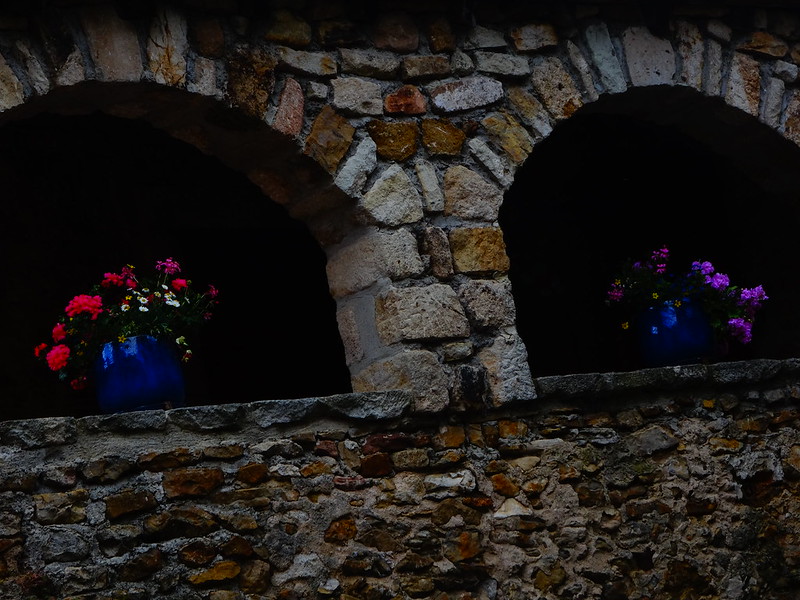 Everything was in bloom. 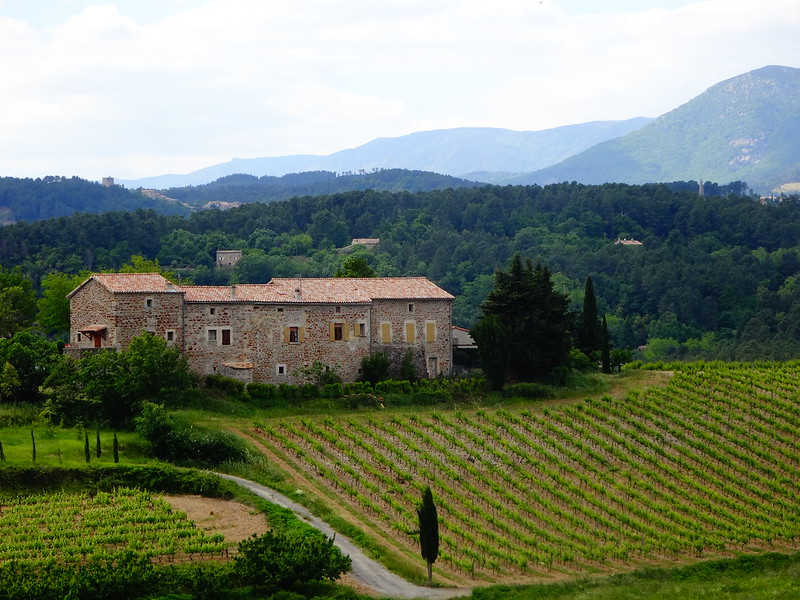 If you go weak in the knees for cozy French villages and untouched churches that are a thousand years old, share my passion for exploring places where tourists don’t go, and going on adventures with people from all over the world, you’re in the right place! Click on the “Follow!” button in the upper-right hand corner, enter your email address, and enjoy the ride. It’s free and I don’t spam my readers.

4 thoughts on “Sacred Spaces And Quiet Towns In The Ardeche”