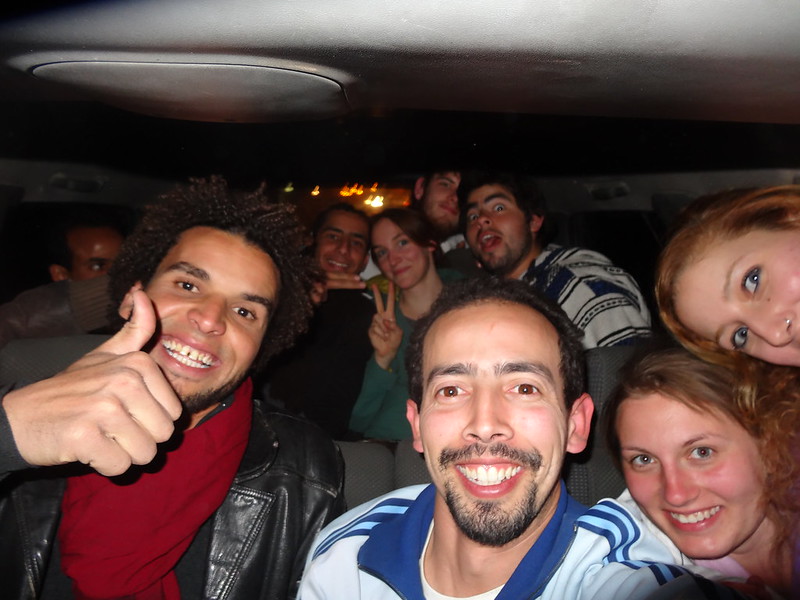 You wouldn’t know it, but I was in a ton of danger here. At least, according to the recent Anti-Defamation League survey which has been making the rounds. I, a 100% Jewish kid from southern California was in Morocco for the entire month of March ( it was a blast) and was surrounded by approximately 17,000,000 anti-Semites. How did it feel to be in a country where about 80% of the adult population supposedly hated my guts? The same as it’s felt for the first 24 years of my life and counting: that is to say, not any different from the USA, where apparently only 9% of the adult population hates Jews. The simple truth that I had suspected before I embarked on my one-way trip to Europe (and my Moroccan detour) and have since confirmed after 9 months on the road so far is this: it’s easy to sit at home and hear from other sources–from the New York Times or Fox News, articles re-posted by friends on Facebook or emails by concerned parents or relatives–that the world is a scary place.

But lately I’ve been seeing a lot of videos posted by Jewish friends and family with tag lines like “frightening anti-Semitic rally in France” or articles like the one about the ADL suvery, which my dad emailed to me only a few hours ago. And I feel that as someone with more experience traveling than many people will ever have in their entire lives, I am qualified to answer the fears that Jews and many Americans have that the world is a dangerous place.

Before addressing the hatred a billion people have for Jews, I want to quickly point out that I am skeptical about the methodology for this survey. It states that 57% of Moroccans think that “Jews are just like everyone else” and yet 63% of them have an unfavorable opinion of Jews–how can you possibly quantify who’s an anti-Semite in Morocco with conflicting answers like that? But I’ll give the ADL the benefit of the doubt on this one and assume that a major portion of the world harbors a senseless grudge against Jews. What do we do to address this?

According to my politically moderate and Ivy League educated dad, the ADL study demonstrates that Greece and Turkey–two countries I hope to visit soon–are places to avoid. Stick to Western Europe and Scandinavia and Latin America–basically, places where Muslims are few and far between. And I should probably avoid Hungary and other Eastern European countries where anti-Semitism is on the rise or has otherwise always been a factor.

While my dad is a prudent man and obviously wants me to stay safe from offensive jokes, hateful epithets, intimidation, and violence caused by people who hate me for being Jewish, I disagree with him–and most of his generation, because he’s not alone–about avoiding countries where anti-Semitism is strong.

I disagree because I went to Morocco for a month and was invited into Muslim homes and treated like family. I disagree because every time I have an encounter with someone meeting a Jew–or an American, especially one from California–for the first time their eyes widen briefly, and they usually ask me if I have been to Israel (not yet) or if I count Tom Hanks or some other celebrity as a friend (also not yet). Then they treat me like a normal person and that’s that.

If Jews stop traveling to places that allegedly hate us, how will this solve the problem of anti-Semitism? Should our countries build higher walls and better defense systems and deceive ourselves into thinking that people who are anti-Semitic will all of a sudden change their minds without meeting a Jewish person? Do we assume that the whole world is either out to destroy us or will nonchalantly shrug at our annihilation, and insulate ourselves from the outside?

No! We don’t! We travel to these places and we meet the people who supposedly hate us, and when we do we realize that our common humanity unites us more than it divides us. I can’t wait to go to Eastern Europe (another hotbed of antisemitism, according to the ADL), Greece, Turkey, and hopefully the West Bank (after I visit Israel, of course) in the coming year. It is possible to hate and fear other people when you are isolated from them, and very, very difficult to do so when you look them in the eyes and see yourself reflected back in them. If you share a meal, get drunk together, play or watch a sport together, go shopping together, or basically do the same things you would be doing regardless of where you happen to be, you will realize how similar you are. This goes not just for Jews, but people of all stripes. More Americans should travel to foreign countries on vacation. Christians should travel to Muslim countries and vice versa.

If we wish to perpetuate the fears and hatreds that have plagued people for centuries, we should continue to avoid interacting with people unlike ourselves. But if we wish to overcome centuries of hatred, bigotry, and ignorance we must meet them head-on and with open arms: with a simple handshake, or a smile, or laughter, anti-Semitism, racism, and xenophobia will disappear, one person at a time.

This blog is usually about the amazing places I have discovered off the beaten path, the incredible people who have made me see the world in a different light, and the  reckless things I occasionally do. If you believe in a more open world, and if you share my passion for traveling on a tight budget, exploring places where tourists don’t go, and going on adventures with people from all over the world, you’re in the right place! Click on the “Follow!” button in the upper-right hand corner, enter your email address, and enjoy the ride. It’s free and I don’t spam my readers.