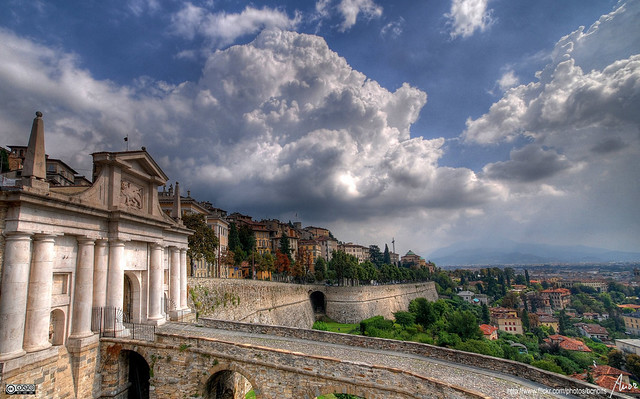 The sky changed rapidly from sunny and blue to cloudy and slate-colored; one moment I was straddling the ancient wall which encircles Bergamo, casually flipping the pages of George Orwell’s Homage to Catalonia and enjoying the warmth of the sun on my skin. The next moment I noticed that rain was imminent, so I put my book away and followed the steep cobblestoned path into the relative shelter of the top of the town.

Despite the chill wind that began to blow, I bought a small pistachio gelato from a stand in the trapezoid-shaped square and continued up the hill into the Citta Alta of Bergamo. On either side of the street narrow corridors that seemed incapable of letting even the most compact car through dove off like wild tributaries from a river made of eroded stone. Many of the buildings had smart facades of stone as gray as the sky above, although when I walked down the alleyways and looked up at their unadorned sides the plethora of cracks, loose stucco, and chipped mortar betrayed their true age. 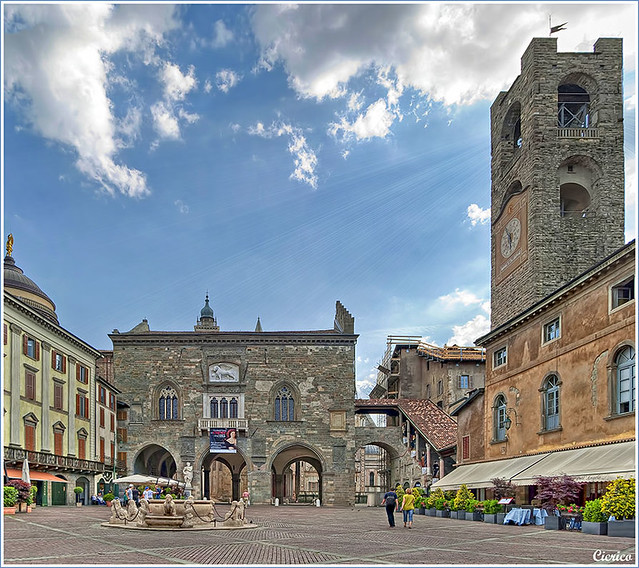 Not much later I came to the main plaza of town, the Piazza Vecchia. Despite the cool weather it was brimming with tourists who, like me, were on a day trip to see the city. Beneath the loggia on the far side of the plaza were several stands selling vintage merchandise and the usual wares meant just for tourists; Luciano Pavarotti LPs rested snugly beside T-Shirts with the silhouette of Bergamo’s old city and BERGAMO superimposed across it. One beggar, a young man who couldn’t have been older than 30, walked slowly around the plaza and approached the clientele of a nearby cafe, holding out his hand for money. He was ignored. 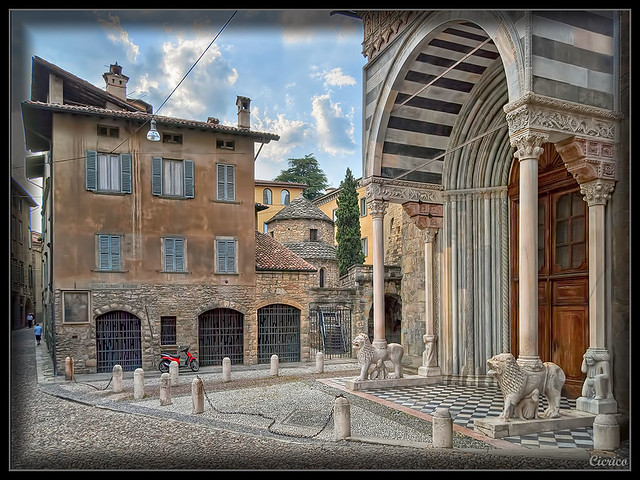 I pushed through the crowded central square and the nearby church and walked up yet another narrow uphill street. This time it was empty, and the sun momentarily pushed through the clouds and the wind came to a standstill. I was at the top of the hill and pausing to view the valley below me, where I could see a lone plane make an approach from the west, dipping low over the city after passing over the tips of straggling Alpine peaks before landing in the airport. Most likely its passengers would disembark and head straight to Milan, never bothering to notice the hilltop city to the north. 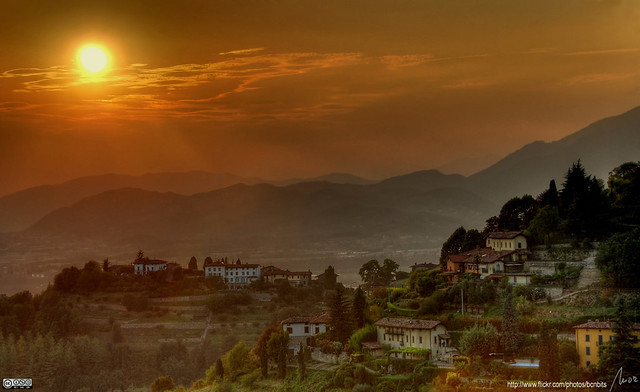 At this point I had nowhere else to go besides back into the main thoroughfare running through town, so I turned down a quiet street called Via Salvecchio. For a few seconds I thought that someone was practicing the violin in their apartment and I was hearing the strains of music out of someone’s window; then I followed the road downwards for a bit more and noticed that the sound became stronger, but also that all the apartment windows I saw seemed to be closed.

The noise bounced gently down the old stone facades and washed-out exteriors, and when I finally came to the intersection where Via Salvecchio and the main boulevard met, I saw a lone woman with a violin and a cloth case on the verge of becoming a soggy cocoon from the oncoming downpour (the clouds had returned with a vengeance). She was playing something classical, that I knew for sure–and I know very little to begin with when it comes to that genre.

For a while I stayed where I was, leaning casually against the side of a nearby building, and when she finished her piece I tipped her a Euro and walked slowly back toward the main gate of the city, trying to beat the rainstorm and the dark. All around me were signs of Bergamo coming alive for the evening: waiters wearing white starched shirts and black aprons were unfolding table cloths inside their restaurants in anticipation of the evening table service. Older women clutched bulging bags of groceries, presumably on their way home to cook dinner. The bells from the nearby Romanesque church began tolling and they briefly overwhelmed the violinist. Then finally they stopped ringing, and the woman raised the bow to her strings and played until night had seeped fully into the day.

Do Medieval walled towns fascinate you? Have you ever wondered what it would be like to taste Italian gelato whilst in Italy? Might you have a hankering to find out who this great violinst was? I can help you with the first two questions, but not really the third. However, if that’s good enough for you,follow my blog-it’s free, and I don’t believe in spam–click on the “Follow!” button up there on the right for updates on my travels and inspiration for the next time you go somewhere new!

2 thoughts on “The Violinist Of Bergamo”