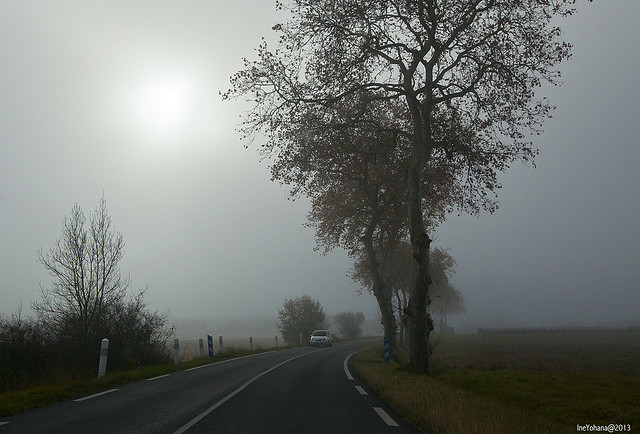 I was on the verge of being stranded somewhere in the northwestern suburbs of Toulouse, dominated by half-finished housing developments and streets with cracked sidewalks and rough brambles poking through wire fences. I stood by the entrance to the peage (toll road) to Albi, a charming small city that drove the Catholic church wild during the Middle Ages on account of the heresy that gripped the populace.

Almost two hours had passed and apart from one driver who said he was only going about 10 km down the road, I had received no offers from passersby. This despite the fact that I had found an over-sized piece of cardboard about 8 feet square and had dedicated one entire side of it to a comically huge question mark. While it was reassuring to see people laugh at the ambiguous question mark, no one was pulling over to offer me a ride and I didn’t want to waste an entire day waiting for someone to take me what was a relatively short distance. 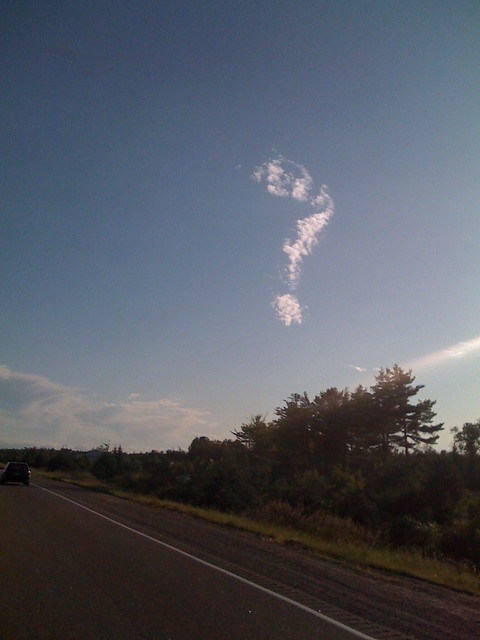 I was on the verge of giving up when a white van stopped and lumbered onto the side of the road so I could get in. The golden truth about hitch-hiking, as is the case with so many things in life that you desperately seek: Only when you seem to have lost hope of getting a ride will it finally appear. I tossed my bags in the back, left the huge question mark sign by the side of the road for any passing philosophers or future thumbers to use as they wished, and climbed aboard.

The man in the drivers’ seat was middle-aged, with a slight paunch and flat gray hair not unlike the kind you see adorning the heads of most Roman statues. He had very dark skin and said his name was Gabi, and immediately I realized the guy wasn’t French. We quickly struck up a conversation in Spanish. Gabi’s parents, grandparents, and so forth were originally from the sun-drenched southern hills of Andalucia, and for generations his ancestors lived in the gilded city of Córdoba before moving to southern France when he was younger, on account of better jobs or perhaps to escape Franco. 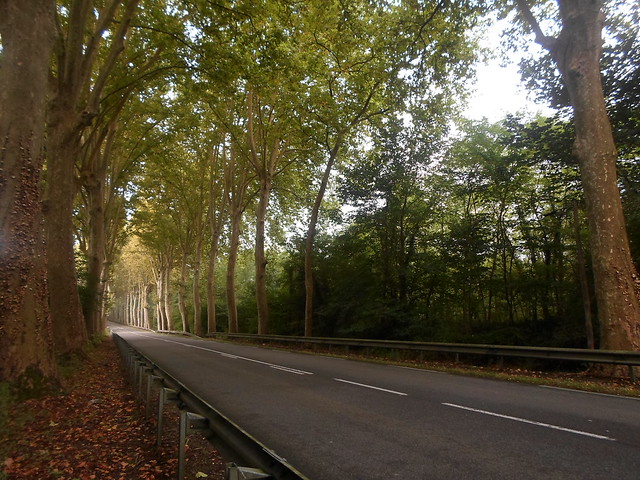 One reason I love hitch-hiking so much is because of the complete randomness of the people you meet, and how usually they themselves were once (or still are) hitch-hikers. Gabi told me that back in the late 1970s he and a friend decided to spend two months hitching all over Europe. I envy people of that generation, and this sums up why: In the northern outskirts of Paris, as he and his friend were trying to pick up a ride north to Belgium, Gabi recalled seeing almost 100 others hitchers, and cars pulling over every few minutes to load up two or three of them at a time.

So what was he doing going to Albi, I wanted to know. For the last two years he had been running a hotel and bar near the center of town, so he did bi-weekly trips to Toulouse to pick up cheap supplies for the business. In those two years he told me I was only the fourth person he had ever given a ride to; it seems like hitch-hiking is becoming something of a dying art. 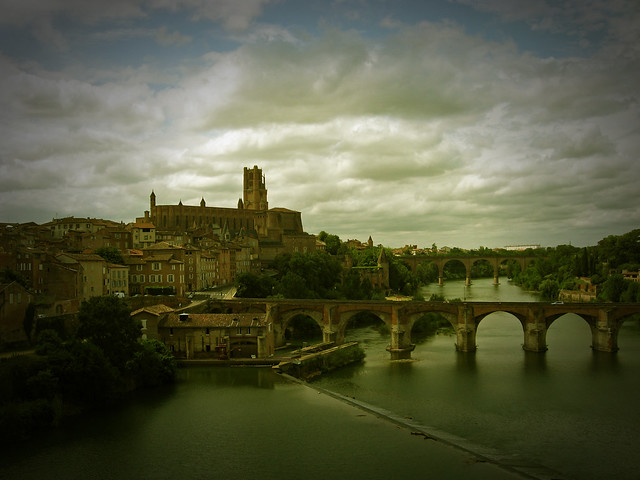 When we arrived in the city he invited me to have a coffee in the bar and let me drop off my stuff so I could wander around unencumbered. As for the city of Albi itself, right next to the cathedral was the old bishop’s palace, which has been converted into the excellent Musee Toulouse-Lautrec, because wouldn’t you know it, but the most famous poster-maker of late-19th century Paris happened to be from Albi.

I couchsurfed for two nights with a laid-back guy named Nick, who lived with a few other girls just outside town, and the highlight of the whole affair was that one of them decided to invite me into her bed instead of have me sleeping on the couch. I didn’t decline her invitation. 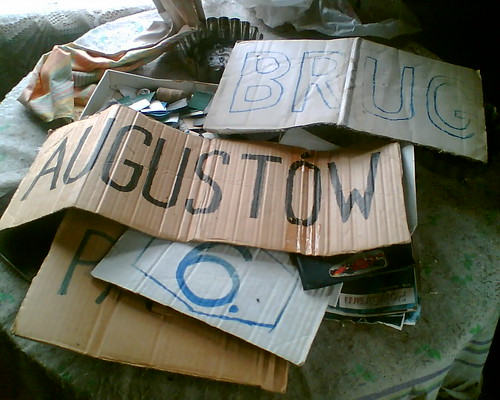 The day I left Albi to return to Toulouse I went back with Nick’s girlfriend Charline. Hitching rides with a girl makes things infinitely easier, and almost immediately we were picked up by a baby-faced teenager who had a few interesting facial piercings. He was only going as far as the next town over from Albi so after five minutes he dropped us off on a major roundabout that led directly down the main expressway to Toulouse.

Our good fortune continued as only a few minutes later we were picked up again. This time the driver was a middle aged man with messy gray hair and a pair of glasses that made his eyes appear to be on the verge of bulging out of their sockets. It turned out he wasn’t going very far either, but we shrugged our shoulders and got in. After talking with Charline in rapid-fire French for a few minutes he turned around and told me in heavily-accented English that he had found Jesus. 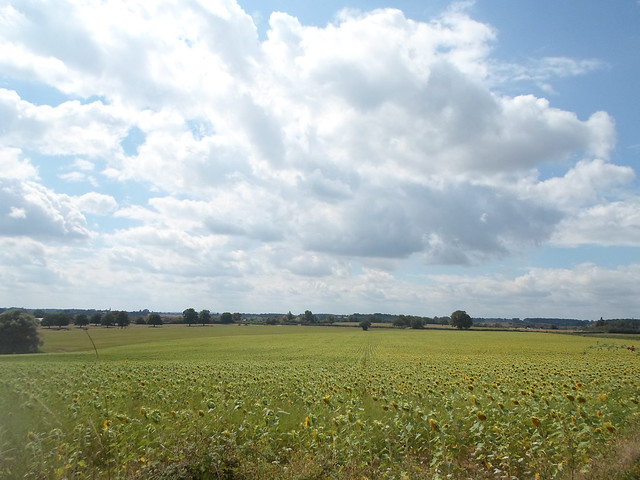 I had been gazing out the window at the passing countryside and was caught off guard both by his sudden turn-around and his bold profession of Christian faith. “Good,” I managed to stammer back with the widest smile I could muster plastered to my face. This wasn’t the first time on my trip that I had encountered a religious European in close quarters, but this guy was borderline proselytizing. I asked if his discovery of Jesus was recent, and he said it happened about 20 years ago.

Apparently his wife at the time divorced him and this sent him down a death spiral of depression and presumably an accompanying dosage of alcoholism, hold the ketchup but add extra self-loathing. And in the end he found religion, and here were two complete strangers holding up a sign with question mark on it and looking very much in need of a ride. Whether it was his belief or just human decency that compelled him to pick us up, Charline and I agreed that as long as organized religion encourages people to be kind to others, there’s no harm done.

After Mr. Born Again Christian dropped us off next to another major entrance to the highway a woman who seemed to look neither completely Spanish nor totally African picked us up. She was half-Venezuelan and was a therapist in Toulouse. The car windows were closed and yet the air conditioning vents were too; the mid-morning sun made things stuffy. Charline struck up a conversation with our new driver and I turned once again to the window and the fields that passed us by.

Fancy hitching a ride sometime in the near future? Or maybe you’re not personally the type, but you think it’s great fun to read about other people’s experiences? I think my blog is for you! Following is free, and I don’t believe in spam–click on the “Follow!” button up there on the right for updates on my travels and inspiration for the next time you go somewhere new!

4 thoughts on “Hitching Rides And Hailing Jesus In Southwestern France”