Serendipitous circumstances brought me to a farm in the village of St. Contest, in the northwestern suburbs of Caen, back in March.

After I visited Beauvais and the remarkably well-preserved city of Rouen, I headed off to Caen, the capital of Lower Normandy and the site of ferocious battles from the time of the Viking conquests in the epoch of Charlemagne up through the Allied bombing campaign and D-Day invasions of WWII. 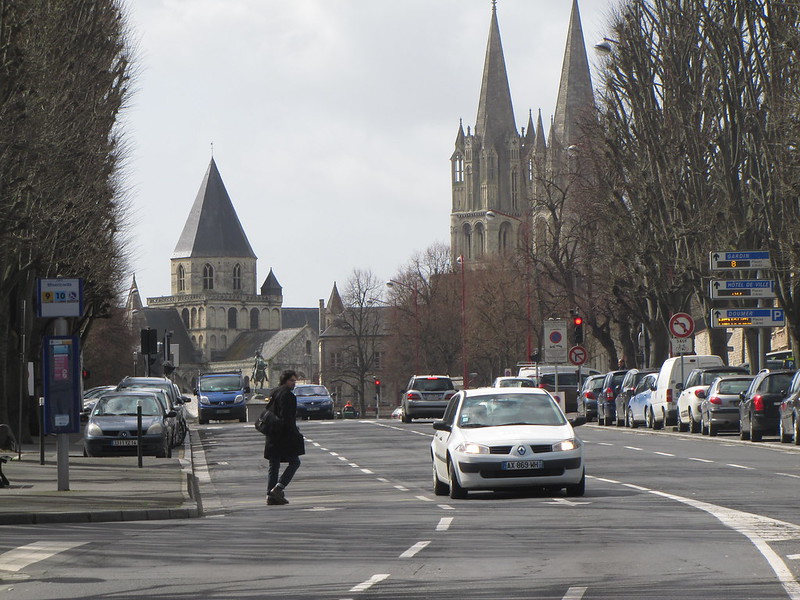 My intention was to spend a few weeks in Caen and use it as a base to visit the richly-preserved milieu of churches and castles that permeate the Norman countryside like the stench of endemic Camembert cheese. 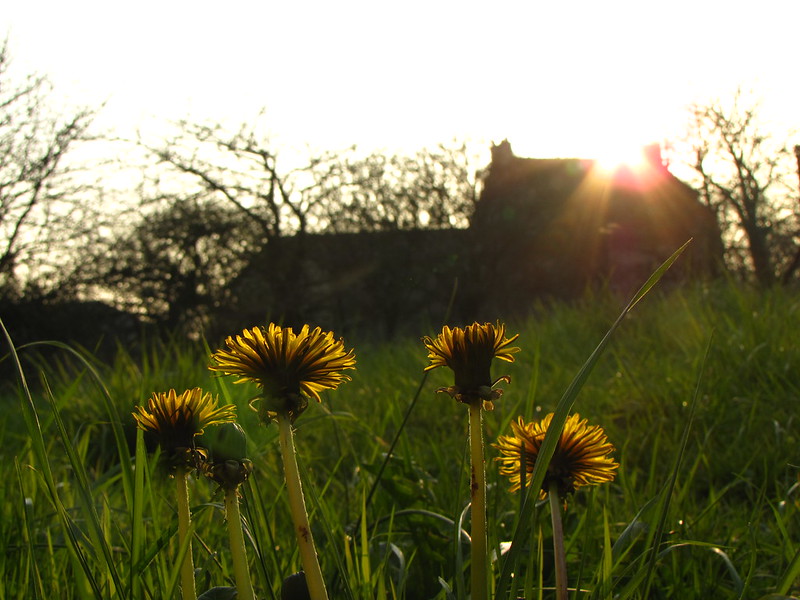 But I didn’t intend to spend it on a farm where, thanks to the still-thawing frost of late March, the only food we harvested came from dumpsters behind major grocery stores in Caen, or gleaning leftover produce at the weekly farmer’s market on Saturday mornings. 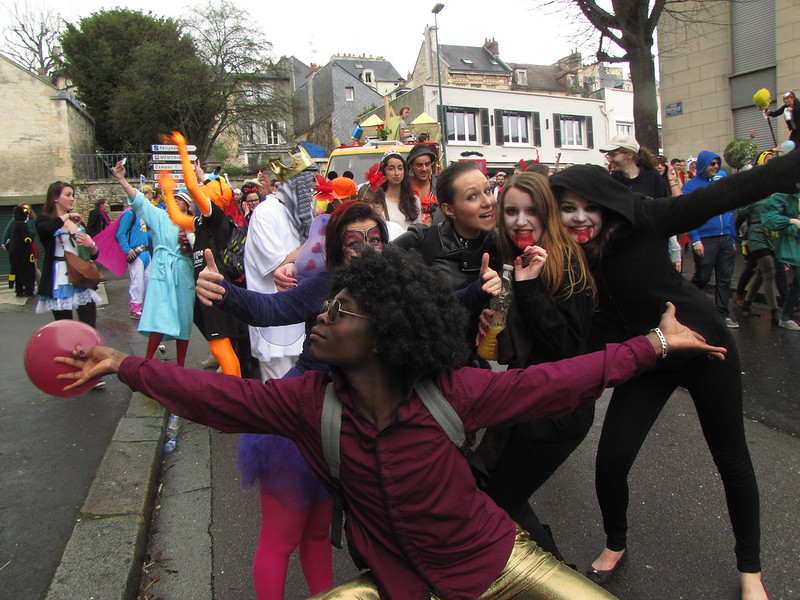 I also didn’t expect to find myself standing in a rainstorm surrounded by costumed, drunken revelers. But that’s where I was when I met Charlie and Virginie for the second time, and that’s where this story begins. 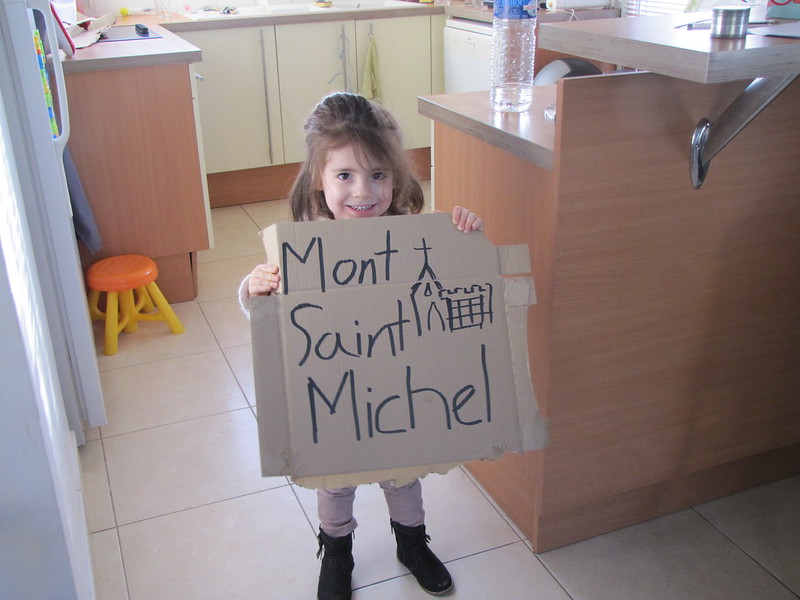 I had already spent close to a week in Caen, splitting my time between two separate Couchsurfing hosts, where I was fortunate enough to stay with Julien, a guy who had traveled through the USA back in the 90s and among other things ran into The Wailers (from Bob Marley fame) at a bar in Tennessee. Julien and his young daughter Ines—whose portrait I took at the castle of William the Conqueror in the city center—were a joy to know, but I couldn’t stay with them forever. So I decided to hitch-hike down to Mont Saint Michel, straddling the border between Brittany and Normandy, and pay a visit to the legendary island abbey.

After spending a day exploring the steep ramparts and ancient choir of Mont Saint Michel and sleeping overnight in the quaint hilltop town of Avranches, I arrived back in Caen with absolutely no idea where I would be staying for the night, and I was joined by something like 30,000 drunken costumed student revelers. 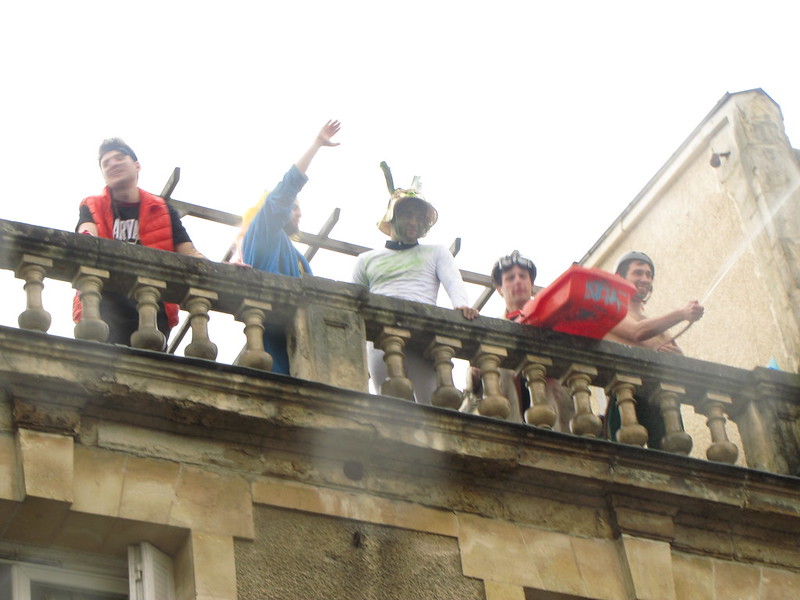 I wandered the streets of the city, taking photos of people because that seemed like a pretty good thing to do while I figured out what my next step was. Through a mist of rain and bucketfulls of water being tossed off the rooftops by belligerently drunk students, I spotted a couple holding hands. They’d pasted tree branches on top of buckets and drawn colorful faces on them; I imagined they could hardly see through the tiny eye holes they’d cut. One of them had a beard that was so long it stuck out beneath the bottom of the bucket like roots poking out of the bottom of a planter. I asked them—in English, since the French generally love meeting Americans—if I could take a photo of them. They silently nodded, and once I clicked the shutter the bearded one took off his bucket. 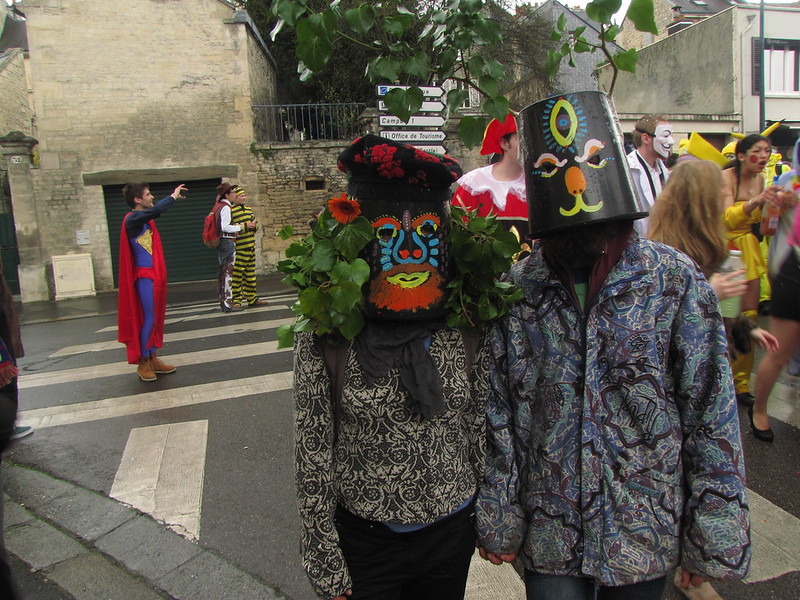 I recognized his face, but couldn’t remember his name.

On one of my first nights in Caen I’d attempted to meet up with a guy named Cedric who I’d contacted on Couchsurfing. He’d suggested we meet at a collective called Café Sauvage, but he hadn’t shown up and as the night came to an end I got a ride back home to Julien’s place with an Australian named Charlie and some of his French friends. We spent no more than 10 minutes talking to each other on the ride, and I figured I wouldn’t be seeing them again.

Then I bumped into him and his girlfriend Virginie—she was wearing the other bucket mask—on the streets of Caen. Since I didn’t have anywhere else to go I followed Charlie and Virginie and the rest of the never-ending parade down the main thoroughfare through the city to the festival grounds, near a huge equestrian course. They asked me what I was doing and where I was going—I told them I’d just come back from Mont Saint Michel, but had no idea where I was headed or even where I was staying.

“There’s plenty of room on the farm,” Charlie said. 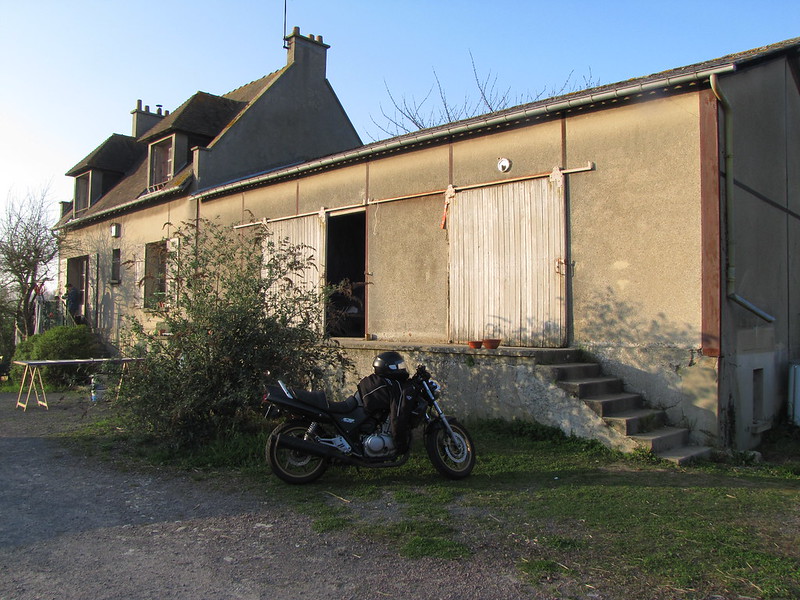 So I took a ride to Saint Contest with Charlie and Virginie, and stayed there for the next few weeks. It turned out the farm belonged to a guy named Edouard, an enigmatic dude who came from an eclectic and successful family. Supposedly he’d inherited the farm, which was in disrepair, from an uncle, and decided to turn it into a collective. They were less than a year into restoring the property, and could use all the help they could get. Normandy in late March is chilly, gray, and damp, and not the sort of place you want to spend much time outdoors. My first week or so on the farm was spent stoking a wood fire in the drafty kitchen, playing a curious French card game called War of the Sheep, getting drunk, and taking my first tentative steps as a dumpster diver. 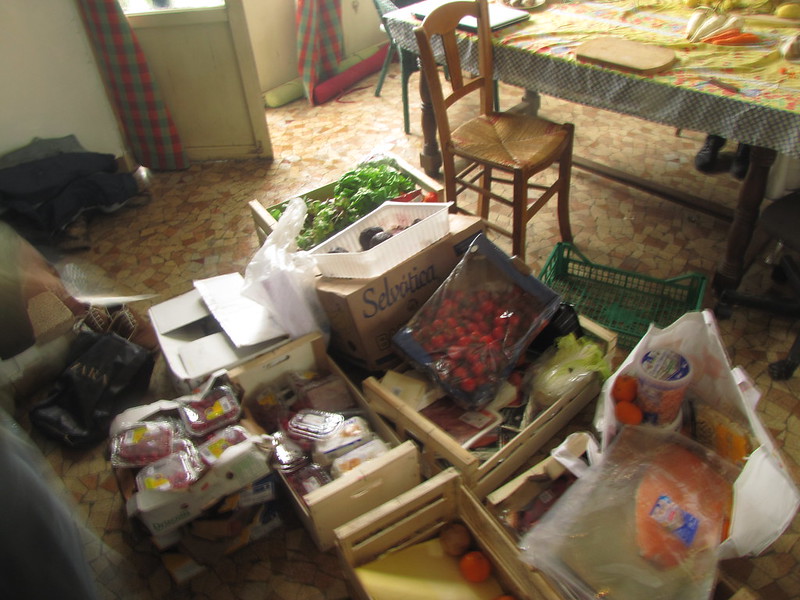 There were no official tasks on the farm; everyone was expected to contribute in some way or another. Charlie and Virginie were the de facto food gatherers and I joined them on our short jaunts into town by bike if the weather cooperated, or else in a Renault minivan if the sky looked a bit too foreboding. We hit up small chain grocery stores, a few massive Walmart-type megastores, the public market, and best of all, a cooking academy just 2 km from the farm. 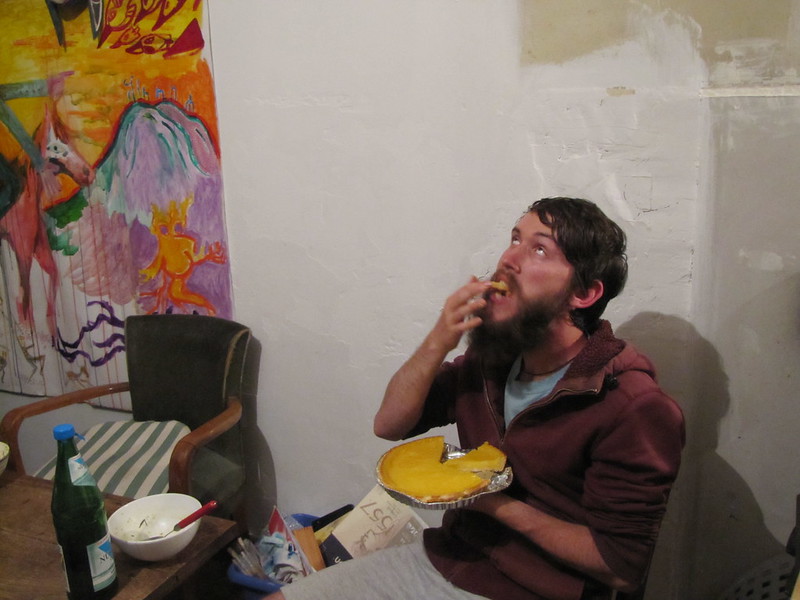 Gleaning food yielded a bountiful harvest of unspoiled produce, “expired” cheeses and yogurts that only got better after the sell-by date, and more quality cuts of meat than I’d seen in the last two years. The cooking academy gave us a steady supply of freshly made apple tarts, eclairs, and other freshly-made patisserie.

The only thing we gathered in large quantities which I absolutely refused to touch was the head cheese—everything else was delicious.

You’d think for a farm run by a bunch of French people someone would have a passion for cooking, but apart from Virginie no one else made much of an effort. I nominated myself executive chef of the house, and in addition to gathering food I spent a considerable amount of time creating hearty food for our crew of sunburned and sweaty guys who were busy clearing weeds, digging furrows, and chopping up the Medusa’s crown of gnarled vines that had choked off the dozen or so fruit trees that were on the property.

As winter gradually withdrew, the farm was filled with the light scent of apple and cherry blossoms, and I was finally able to cut the battered legs off my jeans and walk around in a pair of the most tattered shorts you’ve ever seen. With warmer and longer days, we rode our bikes 20 km to the seashore and back; in practically every village we passed through along the way, a fortress-like church stood, a reminder of Normandy’s place on the front lines—literally—of history. 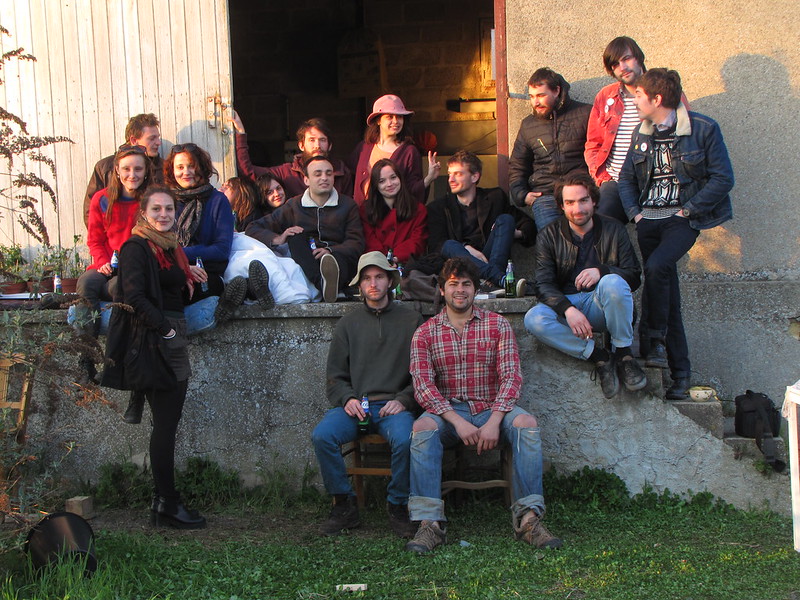 We had more and more visitors as time went by, and one weekend almost twenty people spent the night, crowded into every bed, crammed onto the kitchen floor and the upstairs landing, for the birthday of a member of the farm association. Musicians stayed with us and played gigs at Café Sauvage. One of our friends, Joan, left us his beautiful black Labrador retriever while he was out of the country.

I spent my last week on the farm contributing something else of use—designing a website in English. The goal of the farm is not just to be self-sufficient in terms of food production, but also to host enriching cultural events, such as concerts, film screenings, and artisan workshops. A huge paddock adjacent to the farm will hopefully one day hold a full-sized music festival, like the one I went to in Somerset a little more than a year ago.

When I finally left, Charlie and Virginie drove me to a small town on the Norman coast called Deauville, and we hurried down sidewinder back roads as my plane began boarding. I was flying from Deauville to London, where I would be meeting my parents for my last ten days in Europe, before heading home.

It didn’t really work out that way, but the good news was it gave me ten more days in Normandy than I had bargained for. It was a happy place to write the last chapter of my travels—something to keep my appetite at bay when I came home to California for the summer.