Novi Pazar is as unlikely a tourist destination as you can find in the Balkans. Its proximity to some world class monasteries notwithstanding, the city is mostly a grim collection of cinder block buildings, a handful of Ottoman minarets, and a large marketplace (the name of the city means “New Bazaar” in Serbian–even the name lacks flair). In mid-December the hillsides surrounding the city are a uniform shade of brown, their trees denuded of foliage in advance of the menacing Balkan winter.

So what brought me here? Novi Pazar was my last stop in Serbia before I crossed the border into Kosovo–a border which a majority of nations, including the USA, acknowledge, but which the Serbian government does not.

After my last-ditch attempt to find a host in the city failed I paid about $40 to stay in the luxury Tadz (pronounced “Taj”) Hotel, the finest digs in Novi Pazar. Then I stepped out into the chill air, darkness already blanketing the valley, and walked.

Past the last stragglers at the marketplace, past innumerable cafes with windows fogged up from body heat and thick clouds of cigarette smoke which made people’s legs appear to be holding up ghostly torsos, past a white minivan with all four hubcaps missing and a generous coating of brown mud covering the rear bumper.

The main street became increasingly potholed and muddy as I approached the bus station. A row of money changing houses and bakeries stood across the street from several traditional grill shops. The pungent aroma of garlic and cooked meat wafted through the air, mixing with the occasional blast of exhaust from a passing car. Adding to the potent blend of smells was the gray woodsmoke from burning pine, billowing into the indigo sky.

To my untrained eyes, one grill was no more distinguishable from the others, so I picked the nearest and walked in. There were three plastic tables lined up across the tile floor; at one of them two older men were eating sandwiches. The looked up at me with some curiosity and then began conversation in halting tones.

A glass case filled with various meats and salad toppings took up the front part of the restaurant, and a small charcoal brazier protruded out of the front wall of the restaurant and onto the street, stacks of hamburger and sausage serving as a simple yet effective advertisement.

Two young guys–one bearded, one clean shaven–worked behind the counter. The bearded one greeted me in English before I had spoken a word–in a city unaccustomed to visitors, it must be easy to spot a foreigner. I ordered a chicken sandwich and sat down at the table in front of the two older men. Turbofolk (or whatever you would call this) was blaring from a radio.

Waves of heat radiated from the back of the restaurant, where a woodstove emanated warmth. I was without gloves, so the stove was a welcome comfort. Not long after I sat down, the bearded guy brought out my sandwich and pulled a yogurt out of the fridge. Plain yogurt is excellent accompaniment for washing down piles of grilled meat, and in case spicy marinated peppers are served alongside the meat the yogurt quells the burn.

The whole meal cost about $2. When I handed over a few bills to pay the bearded guy asked me where I was from. Cue the usual oohing and aahing about being from California–I’ve become so used to being a novelty in places like Novi Pazar that all I did at this point is smile and tell them that even Novi Pazar is special in its own way. And while it may not have the alluring mystique of beaches, urbane museums, pumping nightclubs, or cosmopolitan coffee shops, when you think about it, that’s what makes it unique. In Novi Pazar, the humble grill houses, the cafes clogged with cigarette smoke, and the bars crowded with men are the face of this anonymous city. 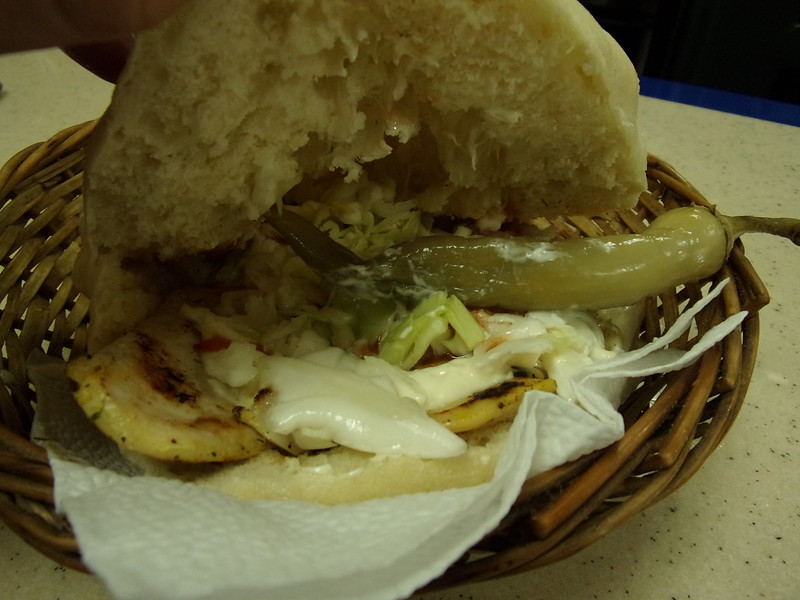 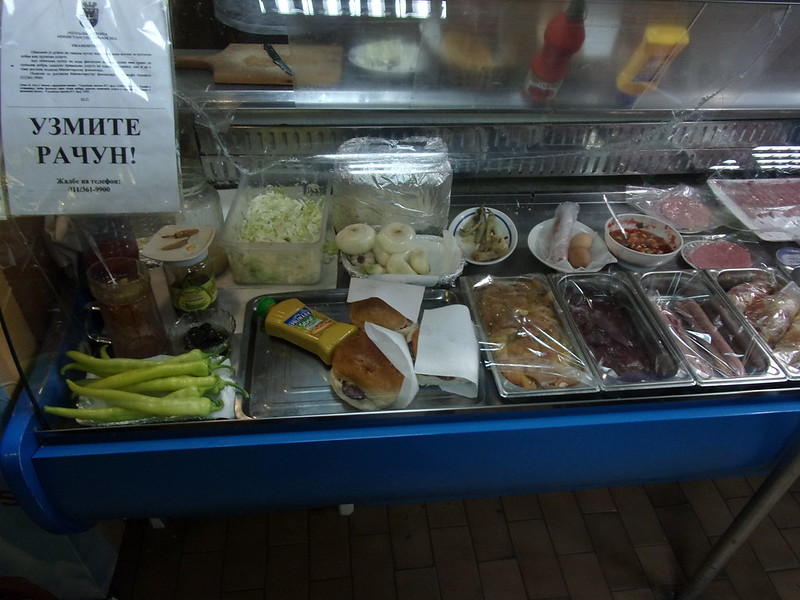 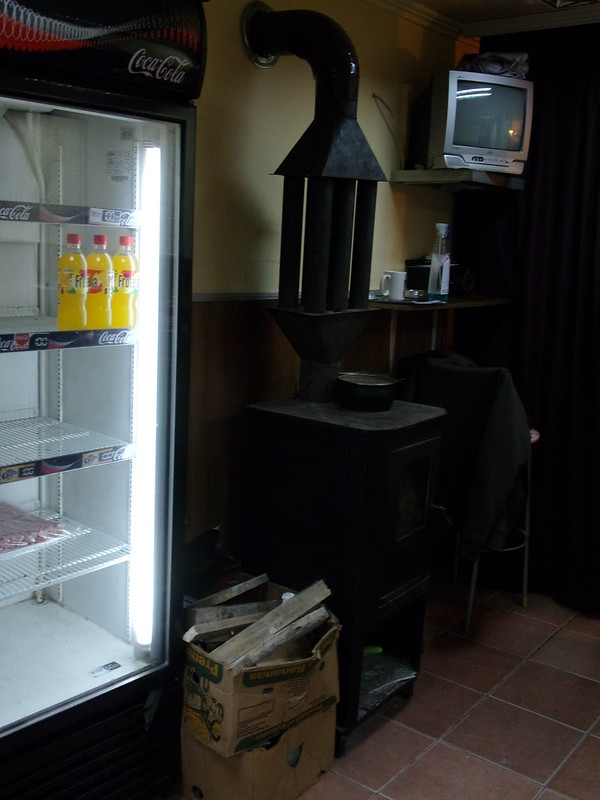 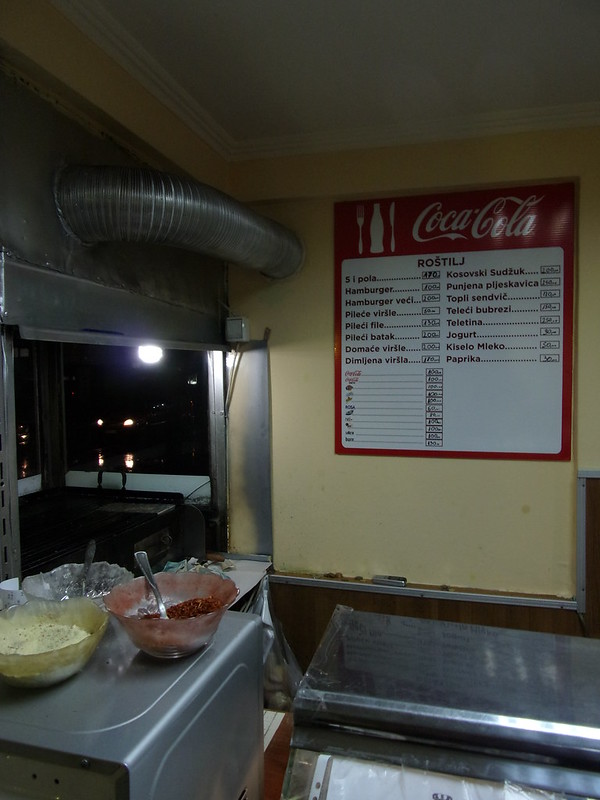 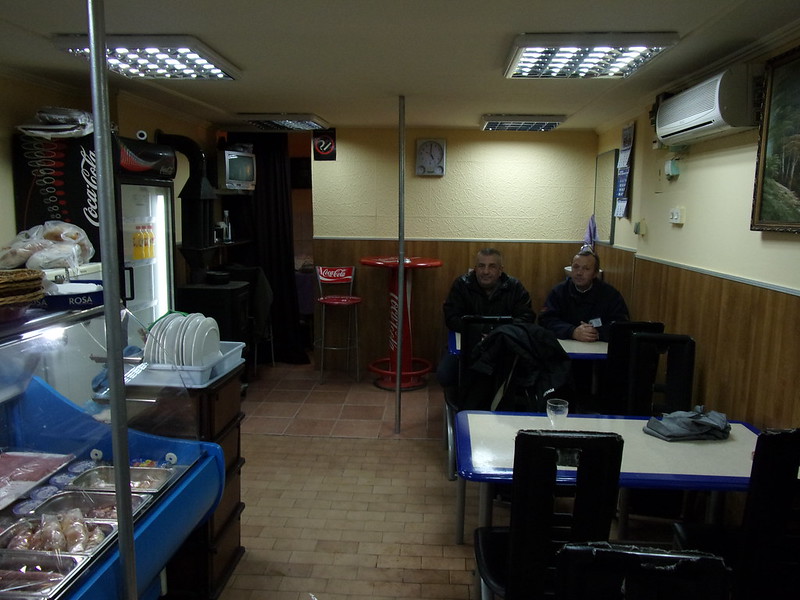