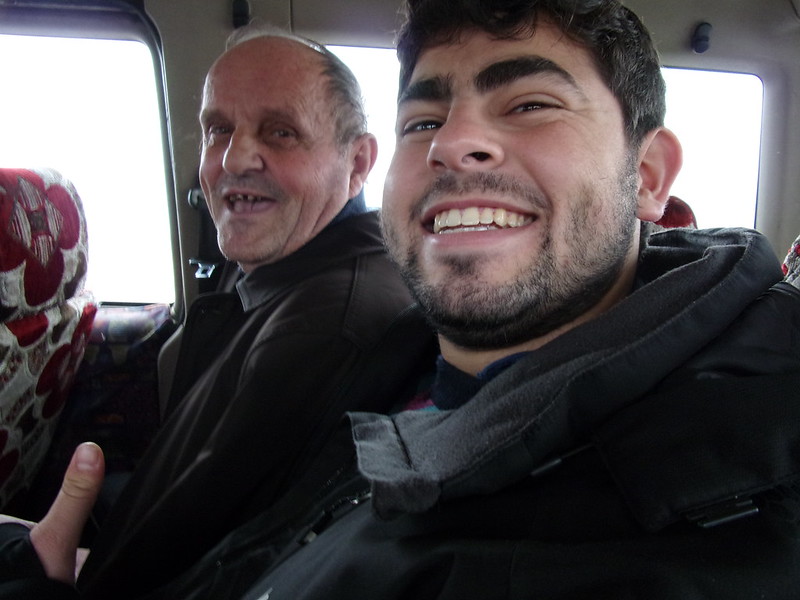 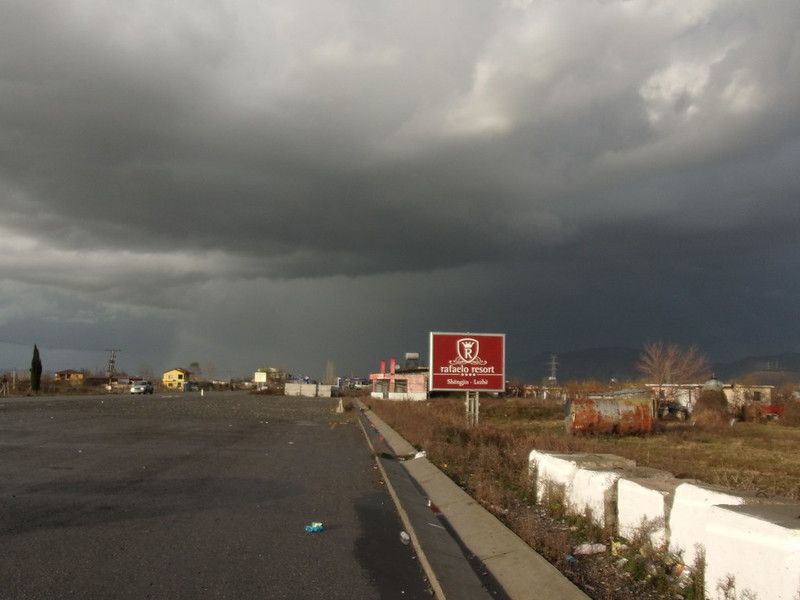 A Robert de Niro look-alike sat to my left, and an older man with hardly any teeth sat next to me on my right. Toothless was talking to me in rapid-fire Albanian and Robert de Niro laughed at something he said. The other occupants of the van I was taking from Prizren, Kosovo to Kukës, Albania chuckled.

“You don’t get many Americans round these parts, do you?” I asked.

At least they understood the part about America–I’m pretty sure Toothless said something like “No sir, we sure don’t get many Americans round here.”

Thus I passed the spectacular ride from Kosovo to Albania, admiring the deep river gorge we skirted and the snow-capped mountains that rose up above us.

After an hour in Kukës the next van I got in was bound for Shkoder, the big city in the north. I’ve grown accustomed to getting ripped off the first time I enter a country where I don’t speak the language–I think of it as my obligatory tribute as a foreigner–and when the driver stopped by a gas station in the middle of an otherwise desolate plain and asked for double the cost we had haggled over before leaving, we parted ways by mutual consent, 10 Euro tucked safely away in his wallet, my pride somewhat dented. I would be hitching the rest of the way–50 km or so–to Shkoder, taxis be damned. 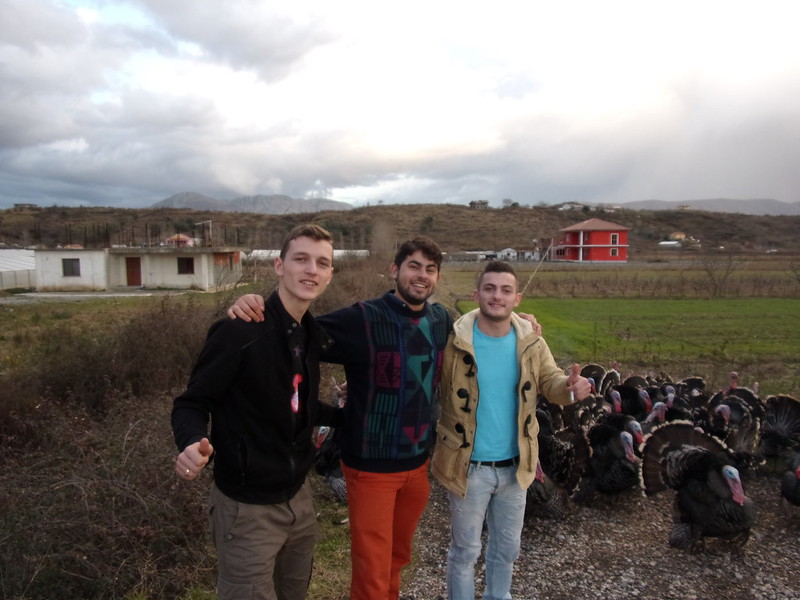 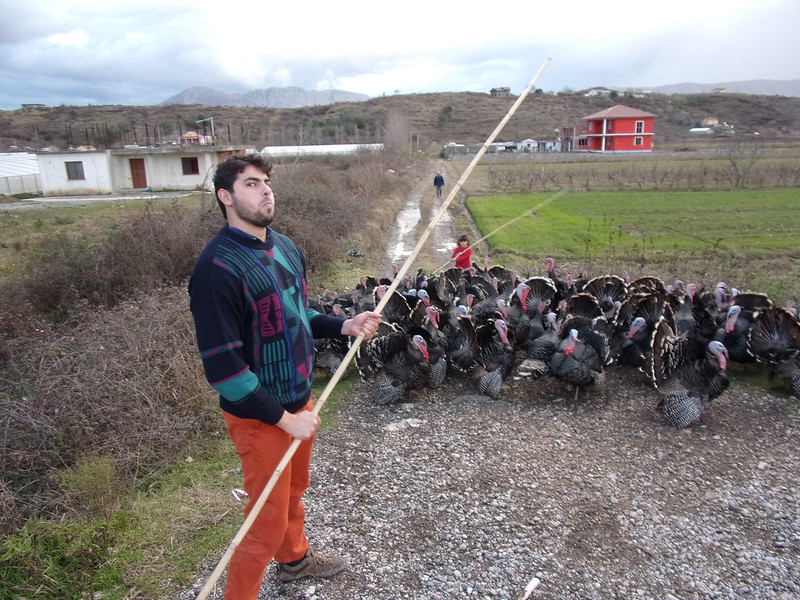 A squall had passed through not long before I found myself by the side of the road, and I stuck my thumb out amidst the puddles, hoping that I would find a ride before the rain came down again. The first few cars that pulled over were taxis, and I waved them on impatiently. Finally a car with two pimply-faced boys in the back stopped. One of them rolled down the window.

“Are you going to Shkoder?” I asked.

They were, and they insisted on giving me a lift. It turned out that this was also a taxi; they were returning from a football match and had already agreed on a set price with the driver, so it wouldn’t cost them any extra to take me. Not long after they picked me up, they told the driver to stop again.

“Since this is your first time in Albania you need to see this,” one of them exclaimed.

We pulled onto the shoulder and exited the car. Two children holding long bamboo poles kept watch over a flock of restless turkeys, and not far from them an older man was busy plucking the feathers from a freshly-killed bird. His hands were red from blood, which I noticed was still oozing slightly from the place where the turkey’s head used to be. The wings twitched slightly.

Our driver took a photo of the three of us smiling in front of the frazzled flock, and about half an hour later the boys dropped me off in front of my hostel in the city center, where I would be staying for the next four days. 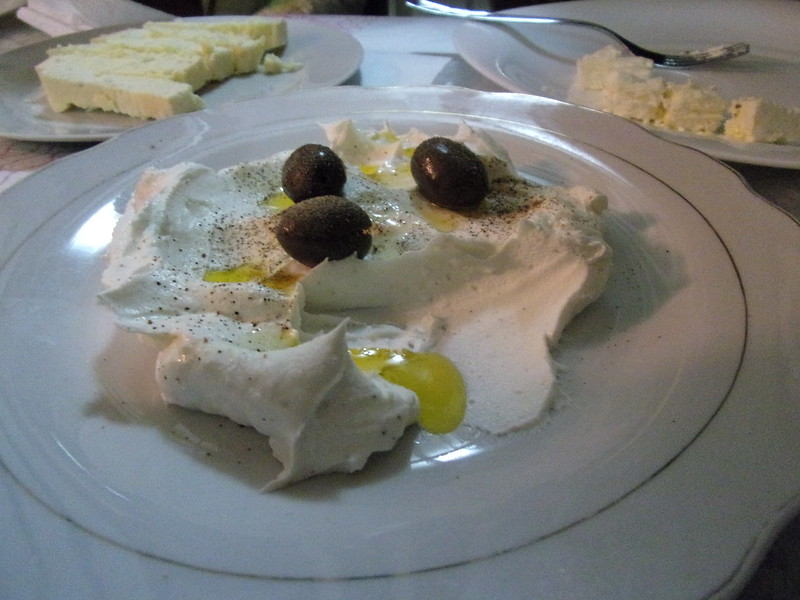 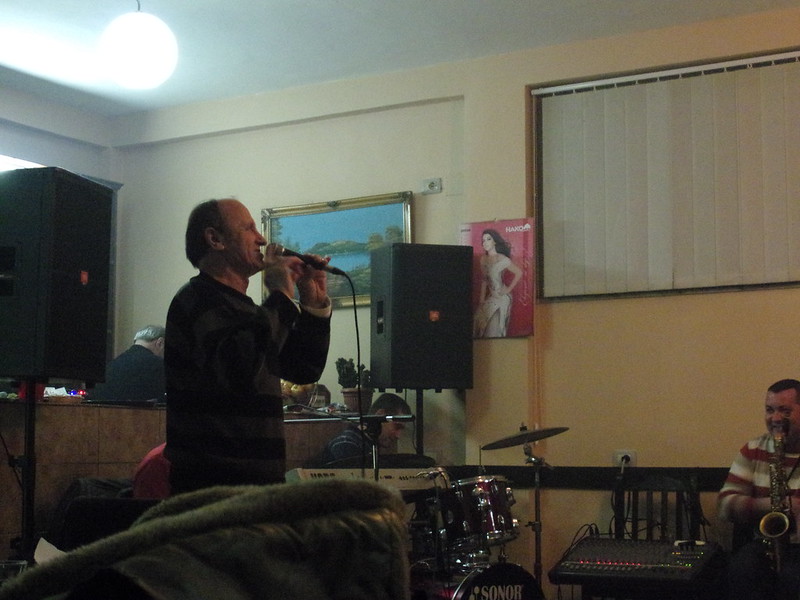 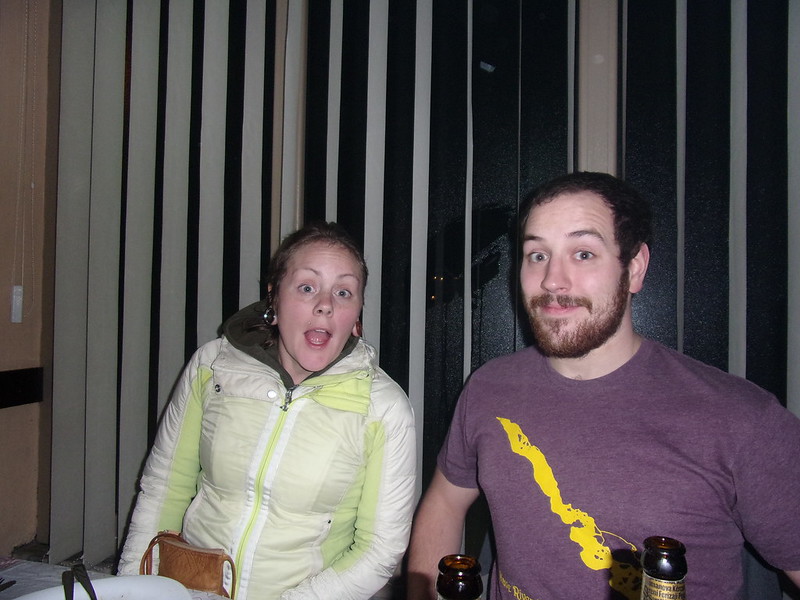 After a quiet first night in, the next day two Canadians, Ben and Keelen, arrived. That night the hostel manager, a young guy named Drini, took us to a smoke-filled cafe where a middle-aged man missing many teeth–a commonplace deficiency, it would seem–sang traditional Albanian love songs with backup from a keyboard, sax, and drums. I ended up swaying to the music, moreso from the beer and lighter-fluid quality rakija than because it was particularly good. 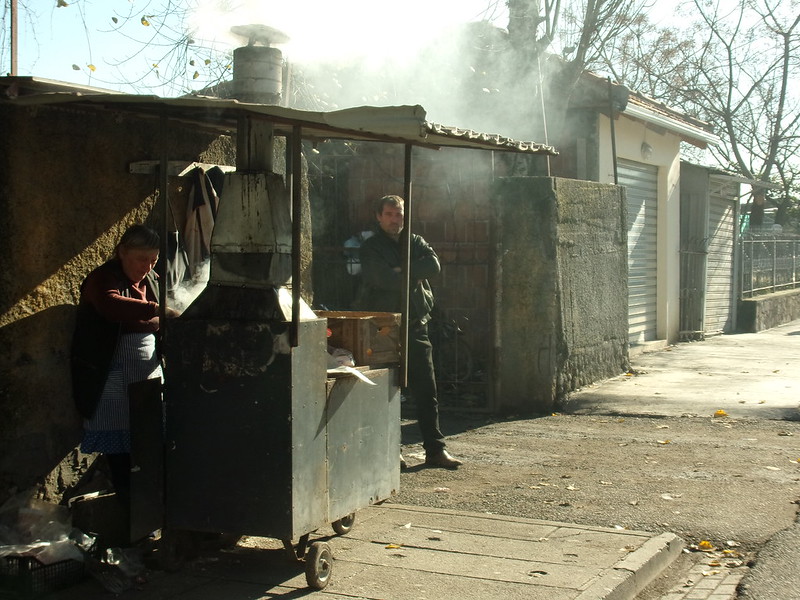 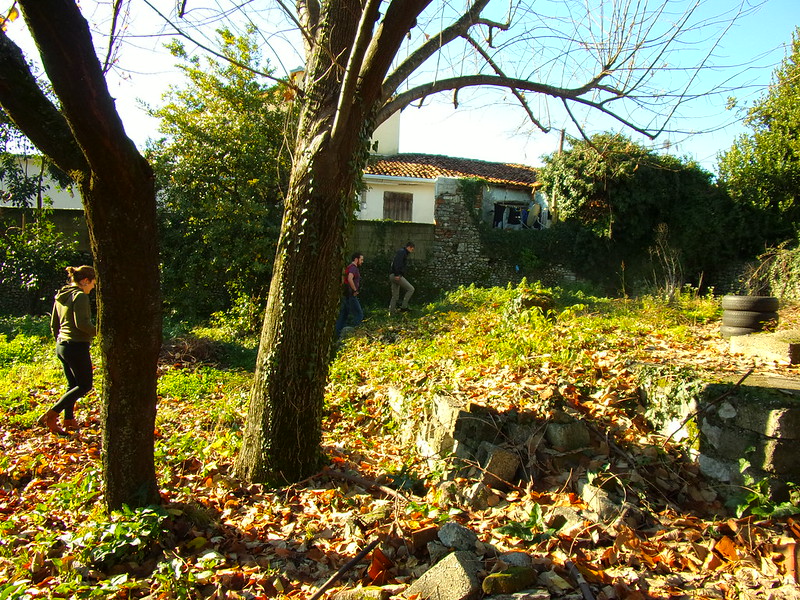 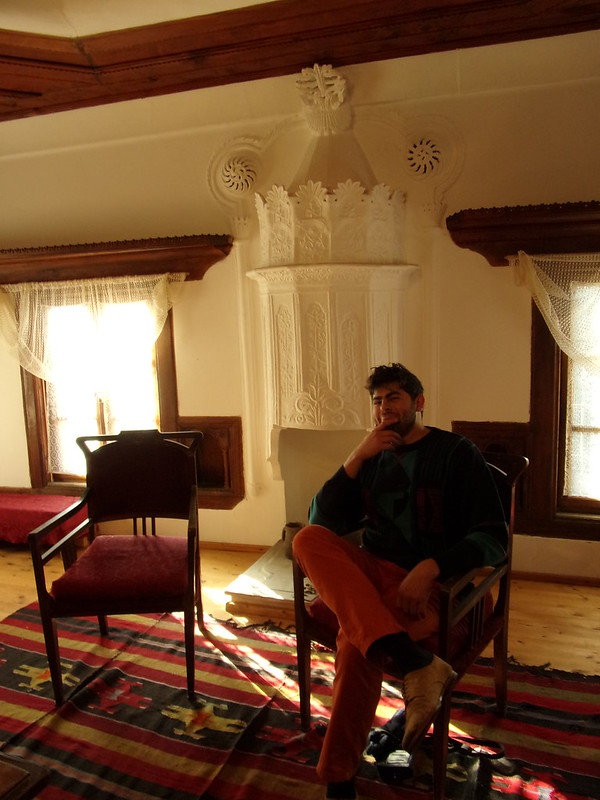 The next day Drini took us on a bike tour of the city. When Albania was still communist, privately-owned cars were banned; a far cry from the vehicle congestion that clogs the streets of Shkoder today. We skirted around cars parked precariously in narrow alleyways, stayed in a tight single file along the main boulevard, and navigated a few hair-raising roundabouts. 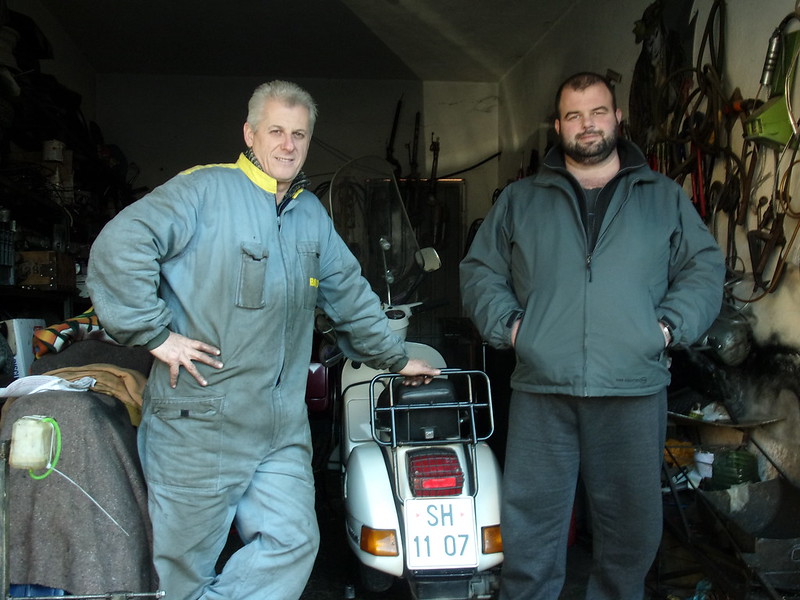 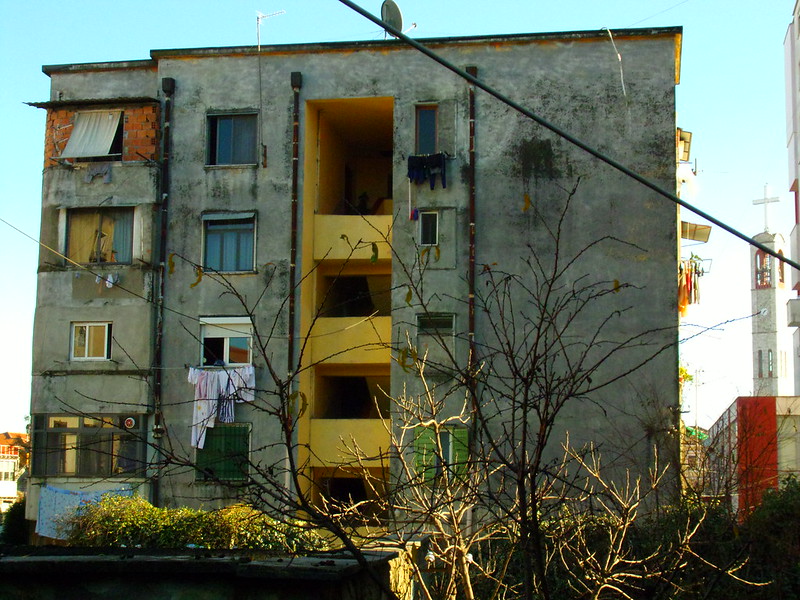 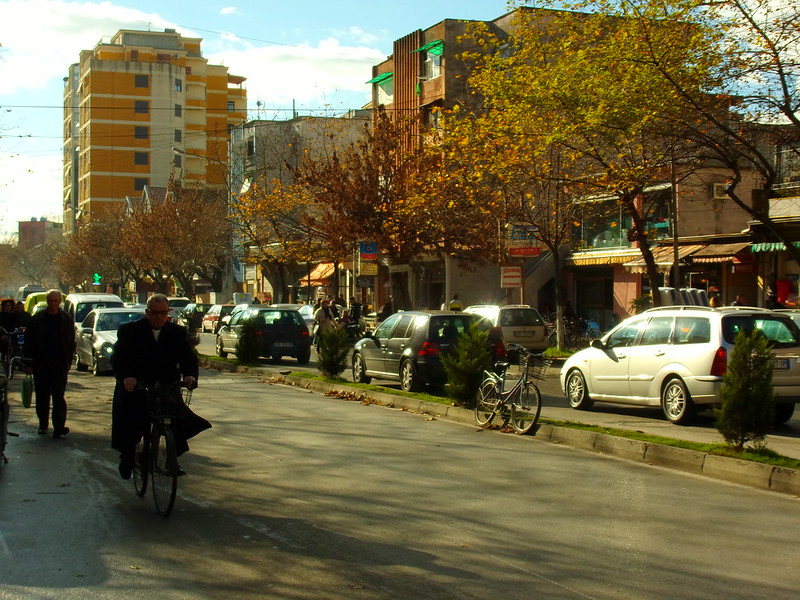 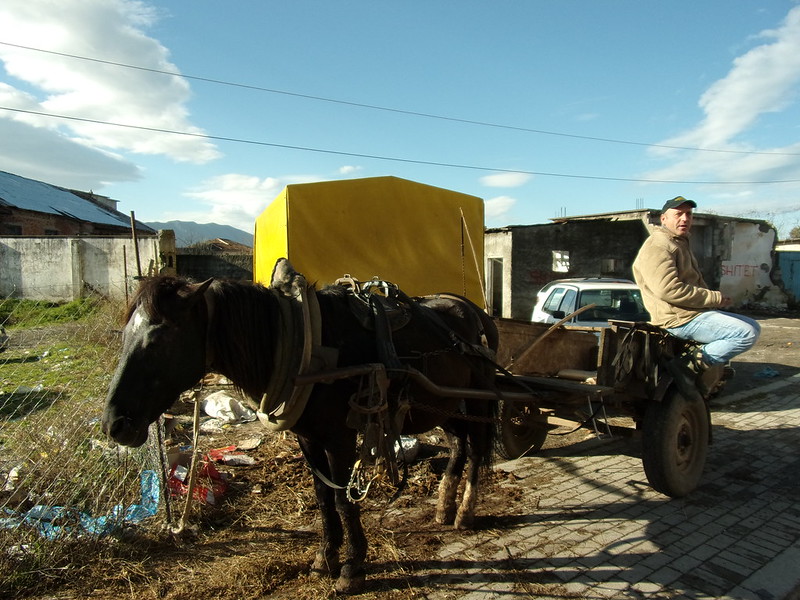 We drank coffee in the Turkish manner: black as hell, strong as death, and sweet as love, in an anonymous square of the city, the clear winter sun warming us as much as our little black cups of coffee. Bright hanging laundry accentuated bleak communist-era apartment buildings. On a busy street corner we noticed a trio of men, legs spread wide in wrestling stances, trying to trap a pair of runaway ducks destined for a fate on someone’s dinner table. A woman with her gray hair pulled into a bun and a blue apron covering her stout figure tended a small cart that emanated mouth-watering smells of cooked meat. Drini took us to an old Ottoman villa with a small stand of orange trees and a well in the yard, and we admired its elegant wooden interior. 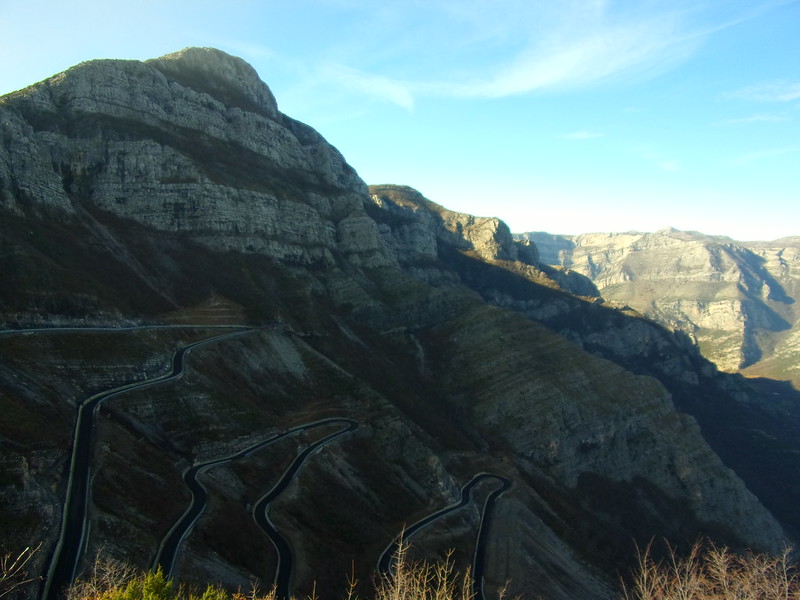 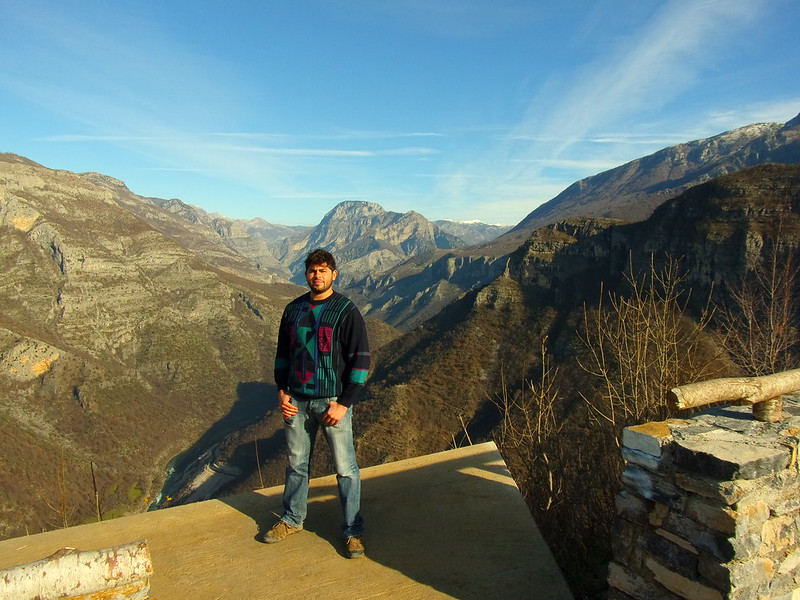 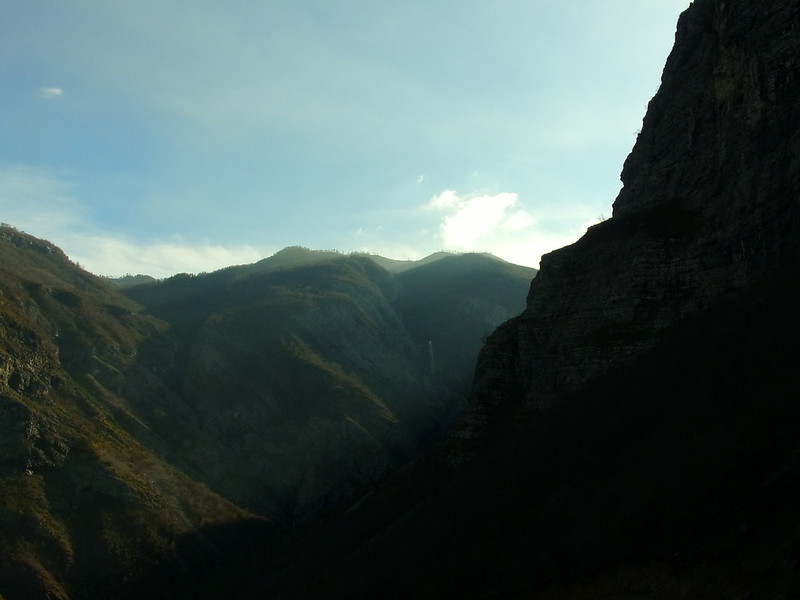 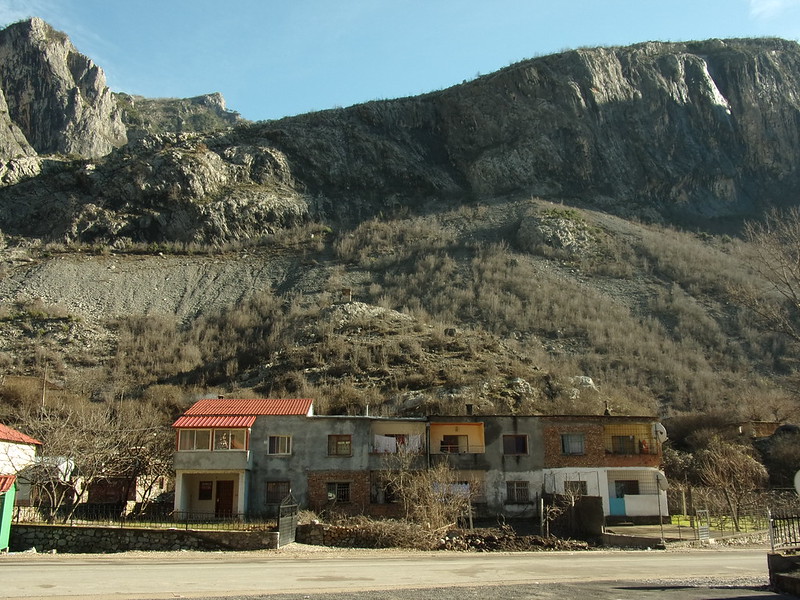 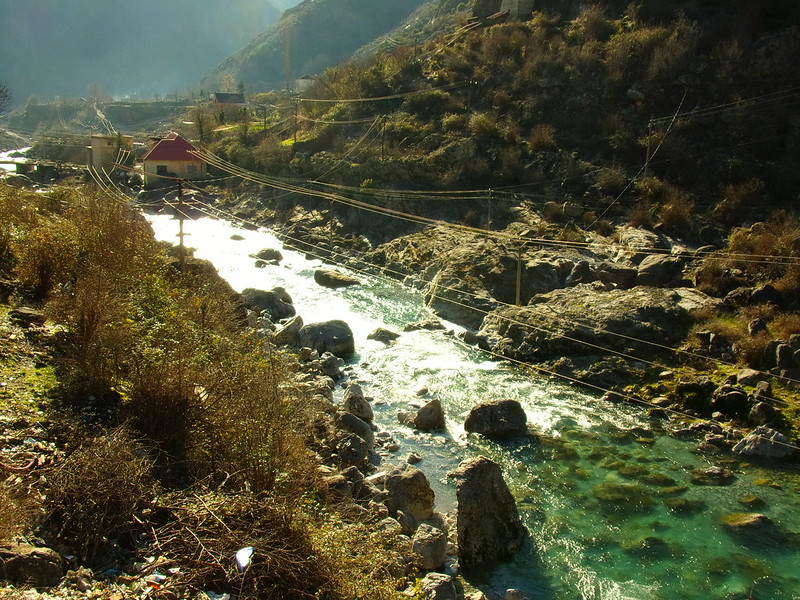 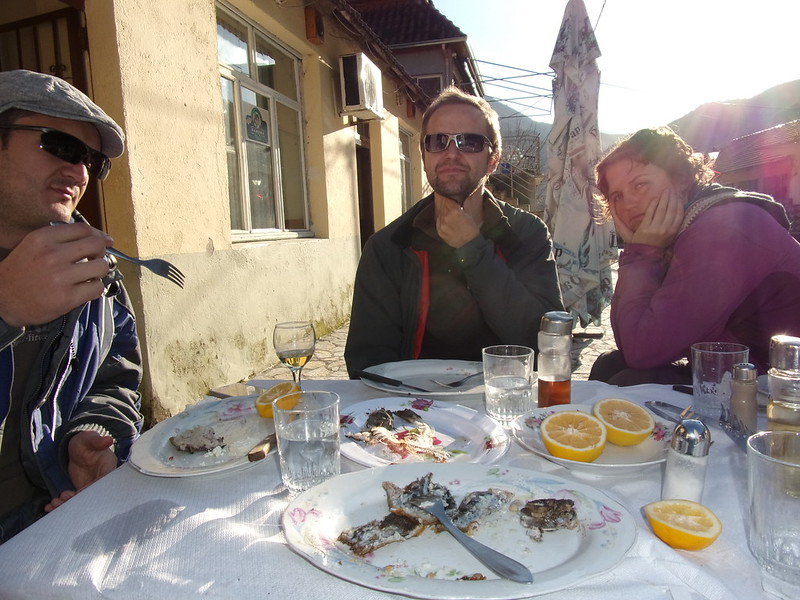 The next day Drini took a German couple and me into the mountains near the northern border with Montenegro. It was here that Enver Hoxha, the Socialist dictator who ruled the country from the liberation of Albania from Italian fascist rule in 1944 until his death in 1985, built a “balcony” overlooking a breathtaking gorge that straddles the border between Albania and Montenegro, then part of the rival socialist state Yugoslavia. If the wind blew in the right direction, Hoxha could spit from the balcony and it would be carried onto Yugoslavian soil–or so Drini said.

After the obligatory photos we descended down the steep switchback road to a village situated alongside a river with startlingly clear green water. A multitude of power lines criss-crossed the river; I wondered until how long ago this isolated outpost had no electricity. We sat down for lunch at a tavern overlooking the flowing water and were served plates of potatoes, cheese, and fried trout caught straight out of the river. After stuffing ourselves and downing a few shots’ worth of rakija, the sun began setting behind the mountains and the temperature dropped swiftly–a little too cold for my sweater to handle. We piled back into the car, taking care not to wear our seat-belts–Drini insisted this was simply not acceptable behavior in Albania–and drove back to Shkoder. 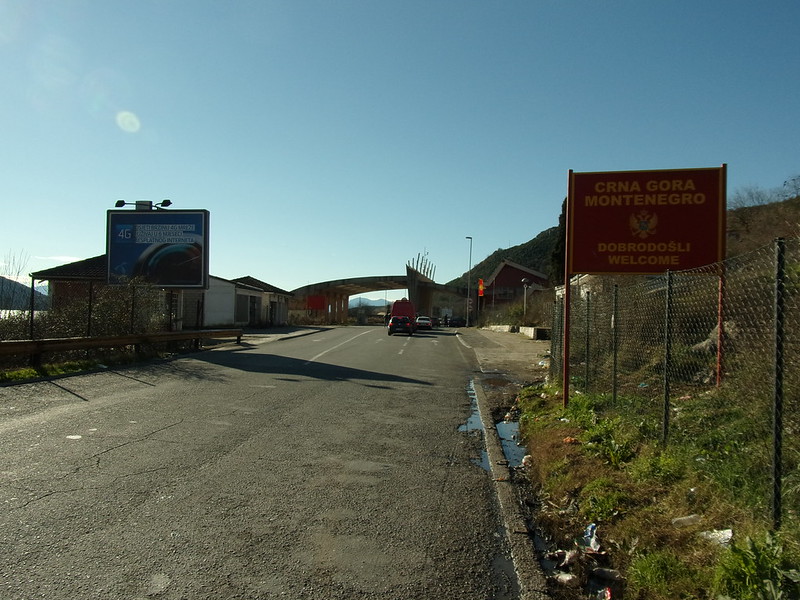 Christmas was around the corner and I wanted to spend some time in Montenegro, so the next day I bade farewell to my Canadian friends, Drini, and the Germans. After once again being scammed by an Albania taxi driver, I was was dropped off at the Montenegrin border and crossed on foot. There were no buses onwards into the country, so I stood out in the sun, my pack lying on the ground, and waited for a sympathetic driver to take me somewhere in new.